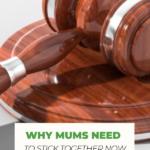 OK, so as humans we sometimes judge people. But why should we? Not only can it be incredibly unfair, but it’s just not a nice trait to have. When it comes to mums, we shouldn’t be judging each other. We should stick together and build each other up! Becoming a mum isn’t easy – it’s a learning curve that you take one day at a time. So what’s the point of judging other mums and mum shaming? There is nothing to gain from it at the end of the day and it’s bringing a negative side of you out for the world to see. It’s a better idea to work together, helping each other when we need it so that we have a good support system.

When it comes to celebrity mums, as they are constantly in the spotlight, a negative light can be put onto them so easily. Every aspect of their public parenting is analysed and if they aren’t doing something the way that people think they should be, they are immediately criticised. Whether it’s the outfits they are putting their kids in, the way that they are holding them or how they show them affection; it’s all under the microscope. Here are some examples of celeb mums that received unnecessary backlash for their parenting:

Singer Kelly Clarkson posted a video of her child enjoying Nutella for the first time on Instagram. Although it’s an adorable video, many people criticised her for feeding her daughter it. Yes, it’s a little unhealthy. But all children should be able to enjoy a chocolatey snack every now and again. Her followers, however, disagreed – with some commenting that she is going to make her children gain weight ‘like she did’ and that feeding her Nutella is a form of “child abuse”. I mean, how ridiculous.

Stacey is constantly posting posts that all mums can relate to, right? Well, one troll snapped back when the mum of three asked how to keep her newborn, Rex, cool in the heat. The troll criticised her by asking her why she needed advice as it’s her third child and that she should know how to keep him cool. Stacey quickly responded to this, saying that she hadn’t had a newborn for over seven years and that when he was young, it wasn’t the hottest day of the year. Good for you Stacey.

Mila was criticised after saying in an interview with Entertainment Tonight that she doesn’t give her children gifts at Christmas. She said that as they were very young, they wouldn’t appreciate them – so she would rather wait until they are a little older. However, this, of course, didn’t go down well with many people, who claimed that she and her husband, Ashton, were being selfish. Although this logic might not align with other people, there is no need to comment on it. At the end of the day, it’s their decision what they do as parents. It’s just another example of why mums should accept each other and realise that we are all different.

Alongside Stacey standing up for herself, other celebrities have started to comment back at trolls that are criticising them. For example, when people were criticising Mila for breastfeeding in public, she said that her daughter was hungry and that she didn’t care about the fact that it was in public. At the end of the day – why should it matter how/when you breastfeed your child? Breastfeeding is a perfectly natural thing that all mothers do. It’s not something that should be analysed and criticised.

Let’s leave it out with the judging – right?

Even if you aren’t a celebrity, it’s clear that at one point or another in your motherhood, you might be criticised. It’s just the way that this world works; even though it’s incredibly unnecessary, mean and judgmental. There is no need for it, but it’s a way that some people like to feel better about themselves. To make sure that this type of behaviour stops, why don’t we just let it go and focus on our own families rather than criticising others? It’s always nice to make friends with other mums and be there to guide each other. Friendly advice is fine – but rude comments are not.

The accessibility of celebrities on social media, and the ease with which people (trolls?) can comment on your parenting style, makes it all too easy for people to judge us while we journey through motherhood.

It’s good to think about how you felt as a new mum and how you were taking motherhood one step at a time. And from there, it becomes clear why mum-shaming simply shouldn’t be a thing.

Just. Don’t. Do. It. And if you see someone being trolled for their parenting, then lift them up.

That’s what we SHOULD be doing for each other. Parenting is tough. We all need support. Every. Single. Day.

If you do need a bit of SUPPORT then why not take a look at some of the articles that we have around parenting tips on the site including:

If you want a few more thoughts for mum-shaming, so check out these articles as well:

Mum shaming is so old, right – in with the new! Come join us in supporting and helping other mums and teachers by subscribing to us.

And see you next week for more of the same – or maybe even before?

Superb reading for mom specially who having toddler. A mom duty is far hard than any other job. Thanks