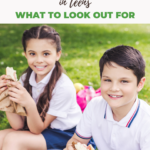 It’s believed that as many as one in five schoolchildren in the UK will experience an eating disorder. So no wonder we parents fear the possibility in our youngsters. Today I would like to share some factors relating to eating disorders in teens that you might need to look out for.﻿

Wednesday’s Child is an organisation which delivers training, support services and wellbeing gifts for those affected by eating disorders, and those wanting to know more.

Here, its founder, Debbie Watson, talks about some of the signs and symptoms you might wish to look out for in respect of eating disorders in teens.

There’s something inherent in the world of parenting that makes it all too likely for a Mum or Dad to think ‘I would know if XYZ was affecting my child’.

Naturally, the parent is the one who sees a great deal of that young person, who witnesses daily (hell, even hourly!) changes. It’s the parent who knows what that child might have previously been susceptible to.

But is it ENOUGH to rest on this assertion when it comes to an eating disorder?

Is it okay to assume that you would definitely know as the ‘creep, creep’ of anorexia or other spectrum issue set in?

Let’s assume you were going to consider yourself well enough informed and understanding of your youngster to step in at the earliest opportunity.

So what would you ‘imagine’ you’d be looking for?

I’ll bet you would be thinking that the signs would be:

How am I doing?

Certainly the above are aspects you ‘might’ spot in a child on the cusp of entering into eating disorder behaviour. But you’d be naïve to think that’s where it starts and ends.

For a start, it’s imperative you remember that an eating disorder can be in existence wherever someone is ‘restricting’ or ignoring their body’s natural hunger cues and needs. So it doesn’t always stand to reason that your child is going to immediately see weight fall off. In fact, they may remain in what others might perceive to be a ‘healthy looking’ frame, despite actively pursuing eating disorder behaviours.

You might, at the same time, assume an eating disorder will be obvious because your child will now refuse to come to the dining table at every opportunity.

Sometimes, the behaviours are more about ‘being sneaky’ and ensuring you suspect very little. Meanwhile they begin to hide, mask or develop deceitful strategies in the quest to befriend their eating disorder.

The main purpose of this piece is to remind you, as a parent or carer – be that full time or partial – that not all signs are equal and obvious. Waiting for ‘all to apply’ would be like waiting for all 25 symptoms of a cancer to affect your ailing body before deciding you should pop to your GP.

The reality is, in children in particular, early intervention is everything.

No-one is going to judge you for raising early with a medical professional or an organisation like Wednesday’s Child that you are suspicious and feel you may need guidance. Especially when it comes to talking about eating disorders in teens.

As you read our suggestion of telltale signs below, be mindful of this, and be prepared to run by the mantra that ‘if there’s any doubt – there’s no doubt’. So, if it’s becoming a concern…go get advice or help. Don’t wait for the obvious.

Eating disorders in teens: What to look out for

Bear in mind that a child’s weight is likely to be changing regularly during adolescence anyway. But you will want to keep an eye on whether your child appears to be gaining the right weight for their height.

Fluctuations in weight can tell you a lot about changing eating behaviours. Plus don’t forget, this could mean weight going up as much as down.

We all love to think are children are active, but is your child now obsessively preoccupied with being ‘physical’?

Do you notice that they’re refusing to sit down, that they’re asking to do more activities and clubs, or that they’re wanting to walk or cycle or implement more energy expenditure than was previously the case?

Not true of all young people, but an increased and somewhat neurotic obsession with looking at their body, talking about their body, pinching their body or finding fault with their body (not just about weight) could be a sign.

You may also see a change in the way they’re dressing for their body – potentially masking a change in shape.

This one is important, particularly in an age when more young people are lured into looking at social media. As a result, they are more likely to tag on to ‘trends’.

Is your child suddenly saying they’re gluten free, that they want to eat vegan? This doesn’t mean they DO HAVE an eating disorder, but it could be a sign they’re using it as a tactic to avoid certain foods and minimise what they are ‘allowed to eat’.

As we’ve said, you won’t always notice a child refusing to come to the dinner table, or finding an excuse not to be there every time. However this could be a factor and is therefore one to watch for.

Spot the excuses that they’ve ‘eaten a cooked dinner at school’, that they ‘ate before you got home’, or that they ‘had tea at a friend’s house’.

While at the table, be a little more vigilant around what’s being eaten, whether it’s being ‘hidden’. Also check whether the dog is getting a second helping beneath their chair.

Be aware also of habits like excessive cutting off food, taking an awful long time over food, or trying to drink large amounts of fluid at meals.

This is one which often goes unnoticed for sometime, and is seen as a child having a positive enthusiasm around baking or cooking.

Be aware that the mental hunger of an eating disorder can make someone obsessed with all aspects around food. It, therefore, makes it a perfect ground for someone to become extremely keen to ‘bake or make’…most likely for others.

You may even find a child becoming incredibly keen on cookbooks or on food-related social media. It’s a potential sign, and one to consider along with others.

Naturally, a vastly changed approach to eating, and a desire to exercise excessively could then lead to worsened sleep patterns. It can also induce tiredness and moodiness.

Again, it’s a scenario which is seen amongst young people in many households at this stage of a child’s life, so doesn’t ALWAYS apply. But you’ll know for yourself whether you do think mood is shifting significantly.

Depression and anxiety are common with both adults and children experiencing an eating disorder. So do consider what the cause might be.

If our parental and family support solutions are of interest, email hello@wednesdayschild.co.uk.

Do also take a moment to visit Wednesday’s Child for some amazing products to help encourage recovery from eating disorders. Deborah has kindly put together this article, so why not see what she is up to. Also pop along to Instagram, LinkedIn, and Facebook to say Hi to Deborah too.﻿

If you are looking for more parenting articles? Here are some you can check out as well:

Thanks so much for stopping by as always – it is a pleasure having you.

Debbie Watson is the founder of Wednesday’s Child, a social enterprise changing the way eating disorders are experienced, supported and understood. Having previously struggled with the deadly illness of anorexia nervosa for more than two decades, Debbie launched Wednesday’s Child earlier this year. The not for profit organisation provides carefully curated wellbeing boxes to those in recovery, as well as delivering support events, training for schools and businesses, and coaching for families and individuals.

Thank you so much for sharing this with us. It's so important for us parents to understand the patterns of eating disorder.

It is a powerful post to provide awareness of the situation and offer the effective solutions to grasp the reality and take action on time.

It is great that you shared the things for parents to look out for related to eating disorders. Not too many parents realize the certain symptoms or traits that can be shown within teens that have eating disorders.

This post would help a lot for parents to those have children with eating disorder. Eating disorders can destroy our digestive system that can cause health problems.

Eating disorders are important topic now. We do need to know about it and how to handle it. Finding a root cause is the key