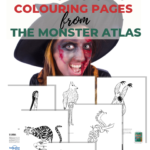 Learning about the ghosts and monsters of Central and South America is a fun history / myths and legends lesson to enjoy with your children. It’s pretty interesting just how many monsters you can find haunting this area of the world. Halloween is a perfect time to learn more about Central and South American monsters too. But don’t let it stop you if it isn’t October. They are a fascinating bunch of critters, and we’ve got them for you to play with on the site now!

This book will help you dig deeper into the mysteries and stories of monsters and ghosts that haunt Central and South America to this date. Back in the 1800s and 1900s, many ghosts started to be seen in and around this area. There are many folk tales about such ghosts, and today we’ll help you with some material to learn more about these creatures thanks to Lonely Planet Kids.

Below you’ll find a list of the monsters found within the colouring page download. It’s fun to learn more about each of the central and South American monsters while colouring them and learning how to defeat each of them. Every monster and ghost has a weakness, which one will you be able to fight off?

What is the story of La Llorona?

Originating in the 1800s to 1900s La Llorona is a folk tale about a woman, named Maria, who drowns her children in the river due to the rage that she felt when her husband left her for a younger woman.  While there are many variations of this folk tale, many people enjoy learning more about the ghost we call La Llorona during the Halloween season.

Instead of raising her sons, she felt such sadness and anger that her husband left her, she drowned her two sons. Today, she can be seen as a “weeping woman” who walks near bodies of water located in Central and South America in sadness for eternity.

Whether you enjoy a spooky tale or not, there’s a monster out there for you!

Today you can download the files below to start educating your children about the monsters that have been witnessed throughout the years of our past in Central and South America. The Atlas of Monsters and Ghosts is organised by region so that you can use this as a fun, yet educational experience for kids of all ages.

What Central and South American Monsters colouring pages are available in our download?

Often seen in The Mato Grosso do Sul jungle in Brazil this monster will remind you of a sloth, well, a larger, hairier sloth that is. This monster is known to make ear-shattering cries and has a stench that is quite terrible.

This weird aquatic tiger has a habit of destroying homes, so it’s best to hide elsewhere if you ever see a lemish in the dead of the night when you’re in Patagonia.

This ghost is rather creepy as it’s a young woman who can be seen floating above the water near bodies of water in Central and Southern America. La Llorona is most known by her shrieking scream that can make your ears feel as if they’re going to bleed.

This fierce monster is half vampire and half werewolf. Beware of his violent tendencies.

This fish and snake combination is actually quite larger than both species and often seen in Lake Nahuel Huapi.

A large snake-like creature that’s often found in the Amazon Rainforest, Sucuriju has been known to be larger than 20 men combined! This king-sized snake captures its prey much like a boa constrictor, by wrapping its body around the victim and squeezing.

We hope you like these resources, don’t forget to take a look at the European Ghosts Colouring Pages we have also given you a sneak peak of from the book too.

Other resources for Halloween include:

Tke the time to subscribe to us if you like this, and come back another day too – you never know when we might have for you!

This is so cute. I love coloring and it's a habit passed down to my kids. I'm sure they will love these.

I don't think monsters are supposed to look cute, do they? (:

I remember watching water horse and how the boy protected it.. .. .. Knowing about the monsters and coloring the same is a great timepass. Somehow it has the impact of fighting the evil in the real life by coloring it with the hues of positivity. Loved reading ❤

Kids who love all things spooky just can't wait for Halloween and the printables should get them just excited enough for the same.

My cousins would love these coloring books. Thanks for suggestion