Dino Supersaurus is a fantastic new series from Parragon books. It is a collection of ‘superpowered’ activity books (stickers, colouring/drawing, building, etc) aimed at ages 6-12, all packed with the adventures of dinosaurs with superpowers – what’s not to love?!

Well..! The books are all set in the land of ‘New Dino City’, and it all begins when four young dinosaurs out playing are hit by a meteor that gives them special powers and they become…’SUPERSAURS’!! So, of course with great powers comes great responsibility and their mission is to defeat T-Rex and the Evil Sinistaurs (who, by the way, are a group of evil dinosaurs that want to take over New Dino City) ….got it??…brilliant!

There are quite a few different titles in the range. Paragon sent us two of the books to have a look at – 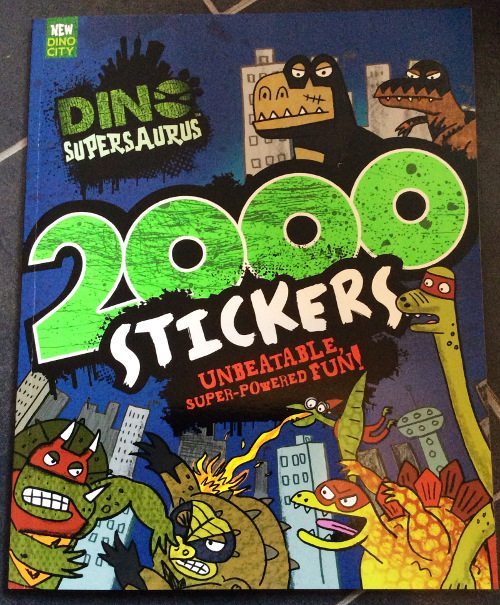 I didn’t count them but there really is an awful lot of stickers in this book…and loads of sticker scenes so they won’t just find there way on to all your furniture and clothes! But not just that, there is also pages of puzzles, colouring and games. 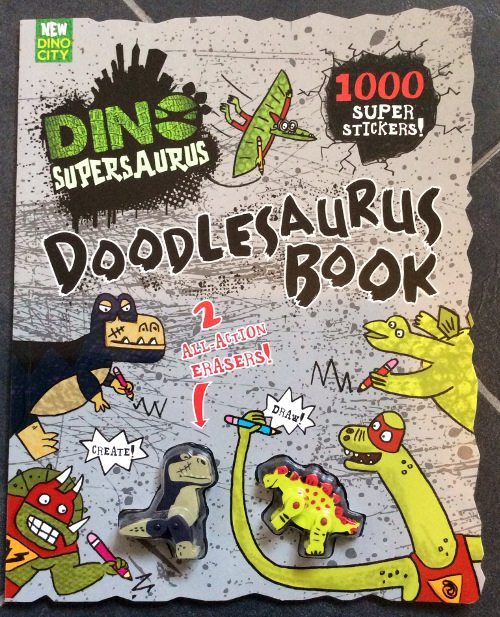 Again, there are thousands of stickers in this book but mostly the pages are fun cartoons with spaces left blank to be completed with your own designs and inventions. ‘Attack the Raptors with Terra’s fearsome fireballs.’ and ‘Disguise Doc and Trix so they can sneak into T-Rex’s base unnoticed..’ and loads of other adventures for you to complete to tell the story. It also comes with a free gift of two ‘all-action’ erasers, which to be honest are too fun to use and better to play with!

What did the boys think?

I handed the books over to Bean, age 5, as they are totally up his street. ‘Awesome!!‘ was his first response, and for a kid who doesn’t often sit down and get arty he was pretty absorbed in these books for quite a while. Roo, 3 was also keen to get involved – mostly because he is sticker obsessed at the moment, but he is too young as it certainly helps for them to be able to read the story and instructions themselves.

My initial response was also ‘Awesome!!‘. The books look great and I loved the idea and design. It totally combines everything most youngsters are in to – dinosaurs, superheroes, inventions, comics, and stickers – all in one bundle. The animation is a nice compromise between not being cutesy, but not fierce and serious either. Although there is scrapping and battles going on, it’s not overly or unnecessarily violent. The books give plenty of opportunity and encouragement for kids to use their imagination, and at a time when I’m trying to get my son to sit down and practice his pencil skills willingly, I’m grateful of the way it captures his interest.

I’ve already made a mental note to get hold of some more of these books as they will make superb pressies for his friends!

We all really enjoyed these activity books together, and I’ll be keeping an eye out for the other books in the series in future.

“If you liked this post, then don’t forget to vote for us in the Britmums Brilliance in Blogging Awards Innovate category. Thanks so much :-D