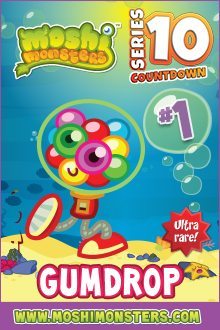 Yesterday was the delightful Dinky, and to end the countdown, we have my favourite moshiling, the uber-sweet Gumdrop…presumably a homage to the recently released and rather cool Moshi Monsters Gumball Machine

that was released relatively recently from Vivid Toys.

Again, this eye-balling moshling is an ultra-rare, so we can turn you to Chatterbox again for a wee introduction…

Isn’t he just adorable? Careful you don’t nibble one of his eyes when you reach in for a sweetie though!?!?

They do seem to struggle a little bit though, as their brains are full of gumballs, they find it rather hard to think straight; luckily the Bendy Vendies are silly, so don’t mind getting things wrong all the time. Pop a coin in their slot, and they might even give you a colourful gobstopper – at least one hopes its one of those rather than one of their colourful eyes! There are plenty to go around, so you don’t even need to be worried that they might run out.

That is the end, Gumdrop is the last of the series 10 Moshis; no more new Moshis for you – come back tomorrow for a chance to win all of the lovely characters that we have shown you over the last 16 days; from Otto, to Marsha and even Splatter. You will be in with a chance of winning the lot of them!