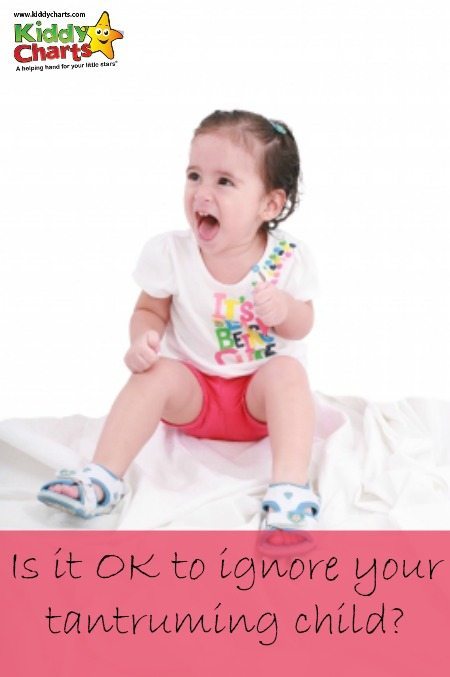 Your child is screaming, and you hear yourself say:

“I am off to grab myself a Diet Coke as I could really do with a fix of caffeine. Would you like anything? I can see you are upset, perhaps a drink will help”

You make sure that you leave your child in a safe situation, and you turn your back to grab that caffeine fix, without registering the screaming too obviously. In all honesty, you probably won’t ever get to have any of that drink though, as really all you are doing is trying not to rise to your child’s tantrum about not being able to put their fingers in the DvD Player…

A month or so ago, the KiddyCharts parenting tips community on Google Plus raised an interesting question for me as to what we really mean when we say to help ride the tantrum phase you just need to “ignore it.” It was triggered by a community member popping in a post about ignoring your child being hurtful for them.

However, in my eyes, the word “ignoring” isn’t directed at the child, or their needs, what it means is don’t give in to the tantrum, don’t let your child put their fingers in the DvD player and give themselves an electric shock….

Clearly this is not something they would want to do. However, they don’t understand the dangers, and as is our often our place as parents, we are to act as a guide to help them discover these things for themselves. Clearly finding this out for themselves could lead to a trip to casualty…

The reason I used this as an example is because both of my children had a tendency to get very cross when they weren’t allowed to do things which were, quite frankly, bordering on suicidal for a toddler.

For me, ignoring a tantrum means just that – ignore the tantrum. What it doesn’t mean is ignore the child, or their need for reassurance, love, attention and guidance. As the article that raised this question quite rightly states, if we are ignored as an adult when we are upset and crying, we feel insecure and devastated.

However, the crying of an adult and the limb-thrashing, smacking tantrums of a 3-year old perhaps should not be directly compared in this way. Typically, one ignores the tantrum and its demands and returns to the child when they have calmed down, You can then provide them with reassurance, hugs, and a little more understanding of why the refusal to respond to their screams occurred.

In this situation, a cuddle and “It’s dangerous” might be all that is required. You might want to do this after the tantrum has subsided as otherwise you could well receive a right-hook from your child. As all of us know, the “terrible twos” tantrums can last for a good hour.

Been there, done that.

My over-arching memory of three year old tantrums is a rather intense one that occurred over the refusal to buy a butterfly brooch in a museum shop. In hindsight, I might have preferred to buy the brooch, but once you have gone down a particular path, it’s rather important to follow it through. Otherwise, those tantrums will become more frequent as the child realises they can get what they want by employing them.

Therefore, I don’t think that ignoring the child is what we are being advised to do. For me, it’s all about ignoring the behaviour. It doesn’t mean that we have to leave the room, or ignore the child. It just means that we show them that their behaviour has no effect on us, or their situation, so they might as well stop it. In addition, it doesn’t give them too much of the attention they are craving either.

Just as important in helping our children, is that when they manage not to get upset, we need to remember to praise them for being sensible, and NOT resorting to that tantrum. Something that is easy to overlook in the flood of relief that we might feel!

What do you think works with your toddlers when they had a tantrum? We have a lot of other information on the blog on toddler behaviour and tantrums that you might want to look at including:

We would love to hear your experiences below as well.

There have been times when I had no other choice. I felt terrible, but after a little while, I could calm him down.

Our 18 month old has been having tantrums when he doesn't get his own way for about three months and I've found ignoring them is the best way to deal with them. If I pay attention to him when he's in full throws of a tantrum it tends to make things worse. Having said that I do keep close by as it's easy at this age for a tantrum to spill over into rage and he has been known to make himself sick... for me the key thing is to carry on as normal afterwards but give him lots of cuddles.

Exactly - sometimes its the only way, even if we don't like doing it. Cheers for the comment, Michelle. Lovely to have you.