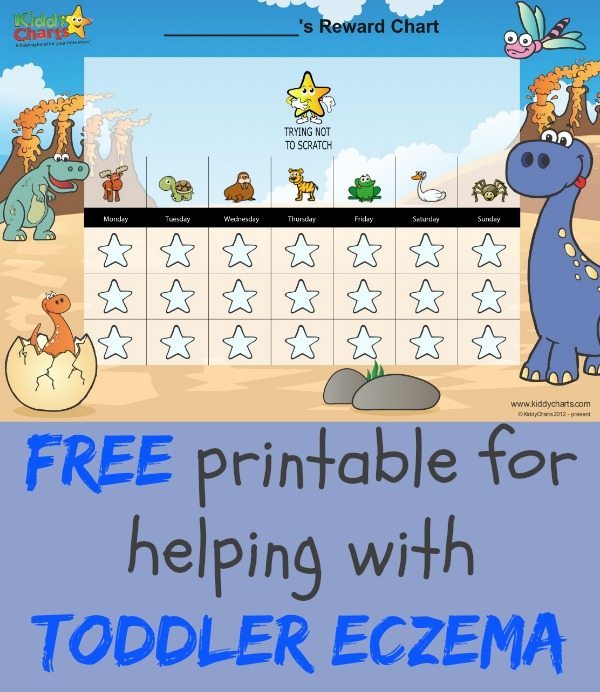 Click to get your FREE chart! If you don’t like this design, visit our REWARD CHARTS SECTION for more options. Just choose the “No scratching” behaviour from within our Looking After Yourself options

This is a guest post from Mei, aka MarcieMom, who blogs about child and toddler eczema on EczemaBlues.com. Mei has a baby girl with eczema, and is passionate about helping other families with eczema. She leads many eczema initiatives, including a national eczema fund, a support group and illustrates an eczema picture book ‘A to Z Animals are not Scratching!’.

Eczema is a chronic condition, characterised by itchy, sometimes red, rashes. It’s also described as the itch that rashes! My baby, Marcie, has eczema from two weeks old and ever since then, I must have said ‘Stop Scratching!’ countless times (whether or not she understood it!). However, asking (or shouting!) our child not to do something is less effective than rewarding him/her for not doing it. It can also be annoying to the child to be told time and again not to scratch, when it’s something so terribly difficult to control. Marcie, being almost 3 year-old now, has started to proclaim:

“I WANT TO SCRATCH”

Why do children (and even adults) scratch their eczema?

Scratching is like a reflex and a relief to the itch – apparently, by scratching, the nerves trigger the body to release endorphins that gives a feel-good feeling and block pain information. Also scratching damages the itch nerves temporarily, which takes from a few seconds to hours to be repaired.

Scratching can also sometimes become habitual, where a normal response (i.e. scratching) becomes habitual and more situations result in the scratching. Dr Christopher Bridgett, explains more in this post on habit formation and how to reverse the scratching habit.

Scratching is however, very bad for the child, as it:

Toddler eczema – Rewarding the Child instead

To reduce the scratching, the eczema has to be managed – good skin care routine, moisturizing, being aware of known allergies and avoiding them, appropriate topical treatment under doctor’s supervision are needed. While we are managing our child’s eczema, there would still be itchy and scratchy times.
We can manage these by:

Some milestones that you can set up to reward your child (follow this link for your free printable) might include:

It’s not going to be easy for both us the parents, and our children, to stop the itch and the scratching in toddler eczema.

We try our best to make life happier by a using a happy reward chart instead of shouting:

If you don’t like the reward chart design we have put together for you, feel free to build your own within our reward charts section, they are all free to download! Just choose the “No scratching” behaviour from within the Looking After Yourself group in our chart builder, and you are away. We have 15 designs to choose from.

Lovely. I am loving this. Kids are doing all the time this scratches. I can't understand how i can stop them. But thank you.

Thanks Helen for inviting me to guest blog! It's indeed a good initiative to reward kids using reward charts, motivating kids (and adults) positively is always better than punishing, keep up the good work!

Cheers my dear. And a pleasure to host you. :-)