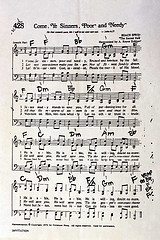 Consistency in parenting: are you and your partner singing from the same hymn sheet?

We are tackling consistency in parenting today in a slightly unusual way for us. However, I thought that our resident agony aunt, may be able to give some advice to Welsh Mum about the differences between her two children as one tends to tantrum and the other is relatively easy. So here is an open letter offering advice to her. If you want to contact Maria yourself, do pop on over to her blog.

Firstly I just want to say that I don’t think anyone listens to people when they are pregnant. You want to believe the best will happen and don’t want to imagine a situation where it will be hard or you won’t cope very well, so it’s not unusual to think ‘that won’t happen to me’ or ‘my child won’t be like that’. We just want to believe that everything will be ok.

Your eldest child sounds like a dream. Well done you for having the rewards chart and being so encouraging with his dyslexia. This will also give him attention when this could easily have been missing with you having to cope with your little one. So you are covering two issues at once and he is still having his needs met, despite your little one taking up lots of your time. It sounds like you are doing a great job with him and you rightly so should be very proud of yourself. I will say just one thing about this and that is to make sure he gets enough praise, which by the sounds of how you are with his dyslexia I am sure you will do anyway. Also encourage him to build up friendships too and he sounds like he’ll fly!

Your daughter, Ruby, sounds like such a little character. It’s so common to hear parents saying, ‘she/he is a little angel for everyone but me’. Our children seem to have a way of knowing exactly how to wind us up and what buttons to press for an instant reaction! They are very clever really!

I literally just laughed out loud when I read about you throwing a temper tantrum in Tesco as I have done exactly the same thing! It works but your partner is right, it can be very embarrassing for those who are with us. It’s usually only a short term solution though, you’d end up getting kicked out if you done it all the time! On a more serious note, it does tell me how desperate you must have been to correct your daughter’s behaviour to have done this. It’s not a first choice in dealing with a tantrum.

Consistency in parenting; perhaps this is the answer?

You say you think her behaviour is due to frustration. What is it you think she is frustrated about? The first thing that popped into my head is ‘is she behaving this way as there is a conflict in parenting styles between you and your ex-partner?’. Simply because you said he had taught her a swear word which is something you’d never do. Maybe she is confused about how to behave? Children need consistency from both parents to teach them what is acceptable otherwise they often become confused and act out. They often don’t realise they are doing anything wrong, as if their behaviour is encouraged or accepted by others (your ex-partner) then they just think they are behaving normally and ok. If you feel that maybe this could be an issue then it is important to sort this out with your ex. You’ll need to sit with him and talk about how you think Ruby’s behaviour is getting a little out of control and how you’d like her to behave, and what you think is acceptable. Tell him that this will only happen if you are both ‘singing from the same hymn sheet’ so to speak. If he’ll not listen then maybe you could get someone to facilitate this process such as a Sure Start family worker. On the note of Sure Start, they also run parenting classes. I’m not saying for one minute that there is anything wrong with you as a parent, but that the classes can be focused on specific areas of parenting such as dealing with challenging behaviour. I’ve just booked onto one myself about learning to be more positive with our children.

I think the behaviour you describe about her being into everything is quite ‘normal’ really. I think most parents would say this. A friend of mine once said how she wished she had a continuous shelf around the whole house at about 5ft high to stop her children from destroying everything in sight. My own Mum once described my now 4 year old as a tornado, destroying everything in his path! I think is just simply down to their curiosity and natural development, wanting to explore and learn new things. I’d simply remove anything that could hurt her or is of much value and let her get on with it. This behaviour will pass when she is nearer 3 years old and her play becomes more focused. You can then spend time on making the house ‘nice’ again and hopefully you’ll be a little less stressed as you’ll not be worrying about what she’s up to as much! Also make sure there are lots of toys around to keep her attention too, this way she may well leave other things alone.

I agree that the reward chart may be a little too much for her at her age but it’s good to keep around as she’ll not need as much of an introduction to it when you do start to use it properly. Have you tried her on the ‘naughty step’ ? They say it’s usually suitable from 2 years old but she’s not far off that now. I used it with my 18 month old and it worked wonders. He hated being on there and so stopped doing the things that caused him to be on there for a fear of going back on! It solved a lot of problems for us!

Remember you are the adult and the one who is in control. Don’t let her control your life. I have a feeling that if you can get her Dad to work with you,and you raise her in the same way then her behaviour may well just settle.

Remember to give yourself lots of praise too. It’s not easy raising kids and especially if you are doing it alone or with step families involved. You’ve done an amazing job with your older boy and are showing how much you want to get on top of Ruby’s behaviour. I have a feeling in the next few months she will calm down a lot. Remember too that your local Health Visitor is there to listen as well as to give health advice, so if you feel like you really are going crazy then pay them a visit. Hopefully you have a nice one who will listen and can advise you on how you could improve the situation also.

I really wish you luck with this and if there is anything you’d like to talk about that I mentioned here then please do get back in touch.

Does anyone else have any advice for Welsh Mum – or any other issues you would like Maria to help with? If so, do let us know below and we will see if we can help in a future post.