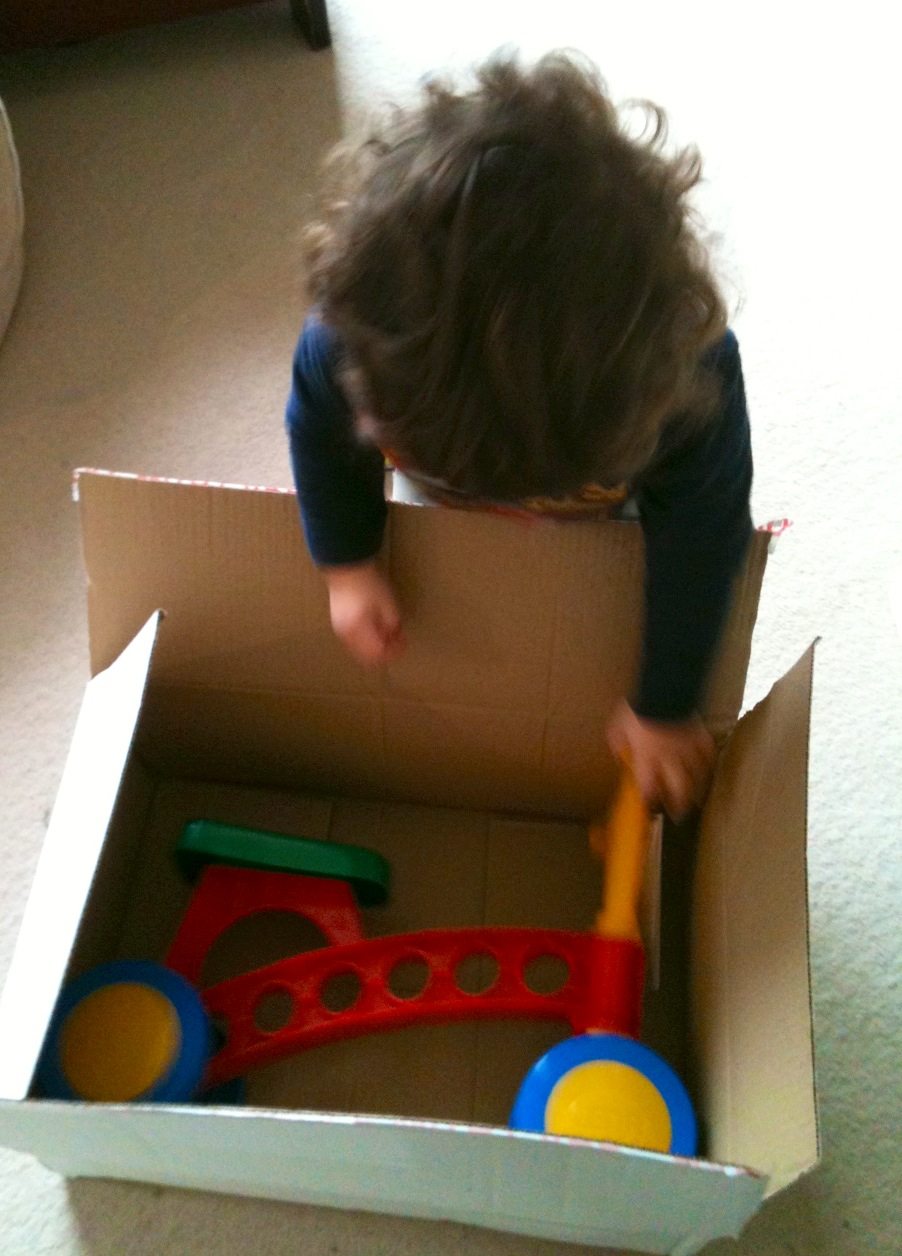 Little Roo recently turned two, and on the run up to his birthday we had been pondering what to buy him. The little lad is infatuated with wheels, to the point he takes a toy car to bed with him!, so the obvious thing was to find him a ride on toy he would love. Unfortunately, we couldn’t! We found little sit-on cars similar to what he already has and nearly out grown, and so we looked at trikes…but he can’t yet pedal! Also, big brother has recently upgraded to a pedal bike so there is a hand-me-down balance bike waiting in the wings until Roo has grown another inch or two. What-a-to-do? So we bought him a new garage for his cars instead.

A couple of weeks later we received a Toddlebike to review. Happy Belated Birthday Roo!

Toddlebike is a cheerful looking, super lightweight, all terrain, chunky ride-on with narrow in-line wheels. It’s made of sturdy, hard-wearing plastic which means there is nothing to rust, it’s easy to clean, there’s no bits to break off…..all making it virtually Roo-proof! It claims to bridge the gap from when little one starts walking till being big enough for bikes, scooters etc.  A balance bike for tinies!

What’s in the box?

When Mr Postman knocked on our door and handed over a big box, my first thoughts were ‘Oh no! It’s empty!!’ – the bike is that light-weight, it weighs less than 1kg!! Then I thought I’d better open it away from Roo and get it built asap…. So it was a pleasant surprise to open the box to find the bike was in there – Yay! – and it was all assembled and good to go – double Yay!. And all with a cheeky ‘eco’ bonus of no extra packaging and padding, it’s that robust it doesn’t need it!

Toddlebike is aimed at ages 1-3. Roo is a big two year old and it fits him just fine. I agree with their claims that it is perfect for nippers who have just got steady and confident on their feet – I would have considered the Toddlebike for Roos 1st birthday present even. I do think by the time he turns three he will have outgrown it….but like I said, Roo is a big lad! There is certainly no weight limit on it – it ‘s strong and sturdy enough that all the family have been taking a turn, purely for Roos amusement…. 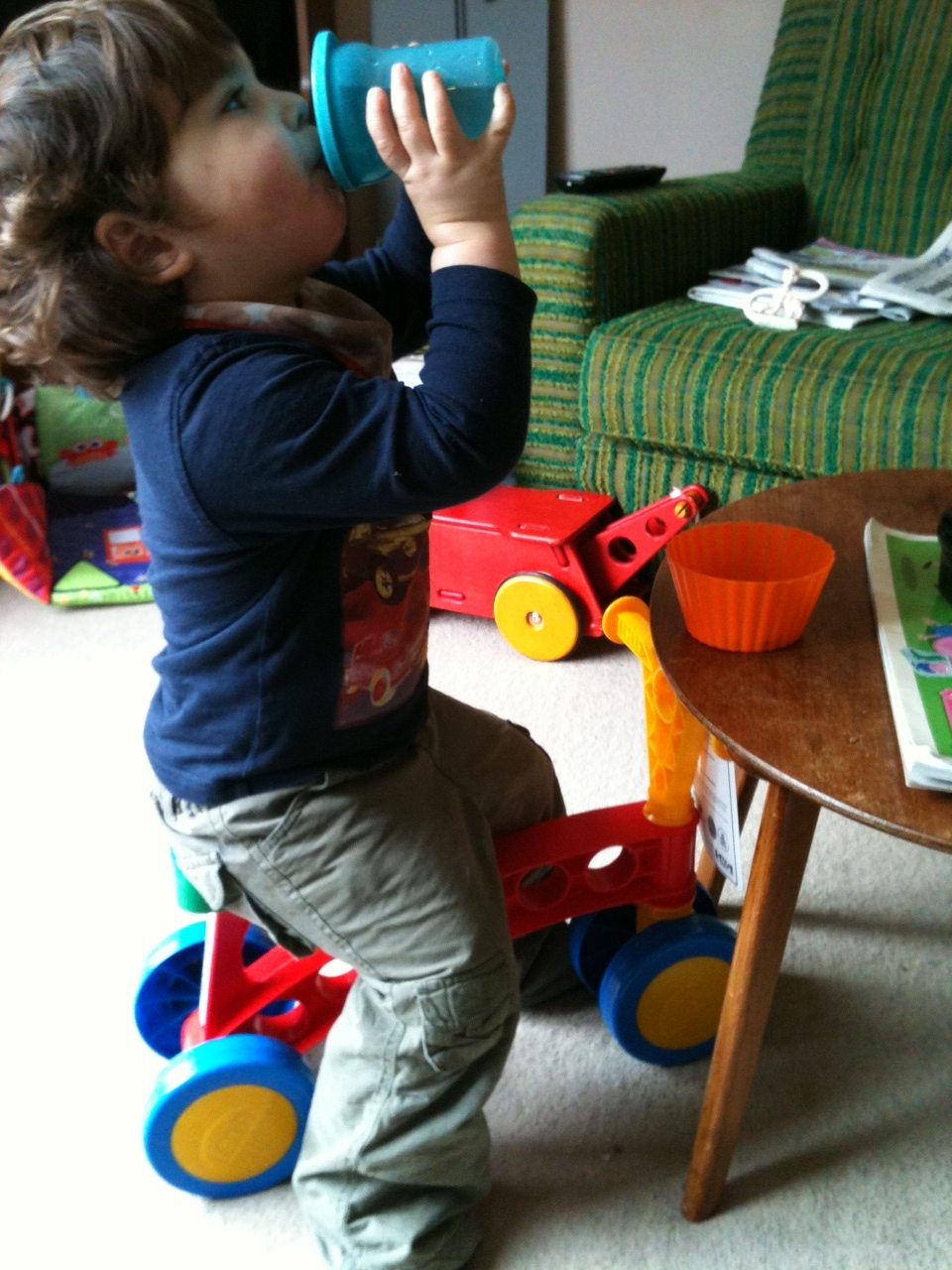 Drinking on the move…!

Definitely very good value for money at just short of £22. Its certainly on a par, if not less, than what one would pay for other ride-ons in the same vein. It seems robust enough that we will get another good few years out of it when it gets passed down to baby brother.

As soon as it arrived Roo claimed the Toddlebike as his own and got very upset if anyone else so much as looked at it! He rode round and round the house on it, not even dismounting to have his snack, and to the point of waving ‘bu-bye mama, off work..’ as he headed out the front door on it one morning…!

At the first hint of sunshine Roo was able to take his new bike out to the park and he had a whale of a time. He could actually get up a good amount speed on it and whizz along at some pace. Fortunately muddy grass was no challenge for its all-terrain wheels. Roo can be independent on his Toddlebike – he can get on and off, pick it up, lift it over things, carry it…it’s just perfectly easy for him to play on and with. 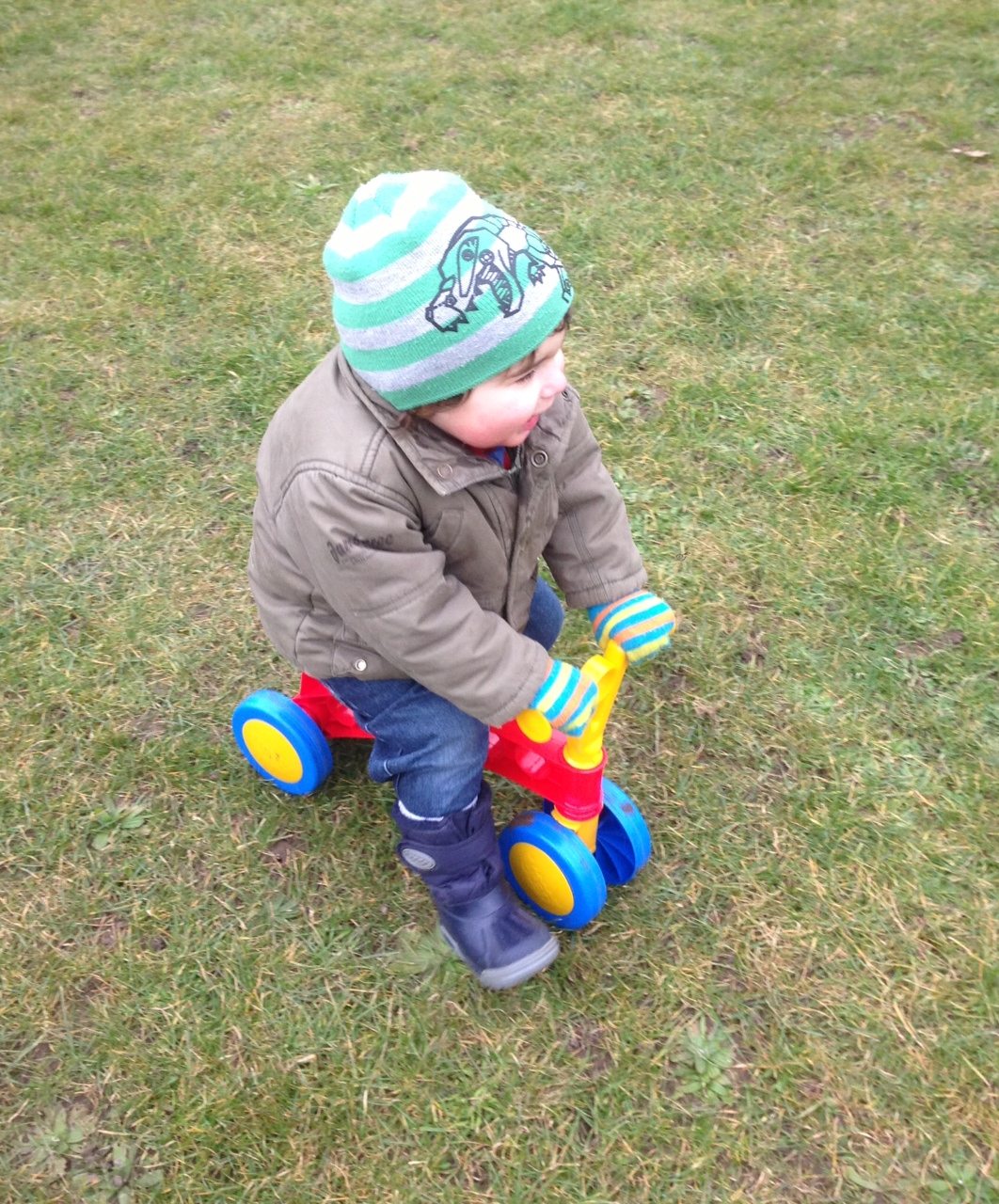 Very much so! Aesthetically it is bright and cheerful in primary colours (it is also available in a pink/purple combo) and a simple design. We felt maybe the handle bars could be a little higher as Roo is a tad hunched over on it, but other than that the size is right and actually bigger than I expected after first seeing photos of one.

I enjoyed being able to leave Roo to his own devices – I didn’t have to chase him constantly. When he did hit a rut and tumble off it was no problem, it didn’t hurt him when it landed on top of him. It’s light enough that he could untangle himself and jump straight up and carry on. Unlike with other bikes, the times when it was abandoned for swings or football, I could very easily scoop it up and carry it, and even tuck it under baby brothers pram – it was easy. Normally when I have all 3 children in tow I can not entertain the possibility of taking out bikes or scooters too, but with the Toddlebike it isn’t any extra hassle.

We don’t have anything negative to say about Toddlebike. If I had seen it in a shop at any point over the last year then there is a very good chance we would have bought it, but I’m a little hesitant to say that Roo will still be on it in a years time – I think he may well have moved on to a balance bike by then, but the Toddlebike will certainly have helped him on his way to mastering one.

We were sent the product for review for free, all opinions are our own though. The post contains affiliate links.

very nice idea.its very helpful for child's.....thanx for this sharing.