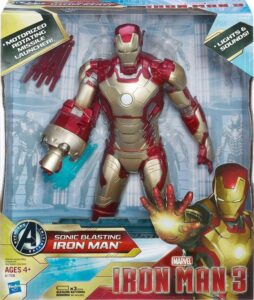 My son is a Stuntboy, and so he loves superheroes. He wants to be one, and I need to be one to keep up with him. He is always on the move.; so when given the opportunity to review the

Sonic Blasting Iron Man toy which has just come out due to the release of Iron Man 3, well, I couldn’t say no really could I?

It’s a 33cm tall Iron Man. Sadly there isn’t a Robert Downey Jr in sight, but that only disappoints me because I am a mum who doesn’t get out much anymore. The figure comes with ten “arrows” which can be added to his sonic arm, and blasted off by pressing a button. Here, let Stuntboy demonstrate it for you…. 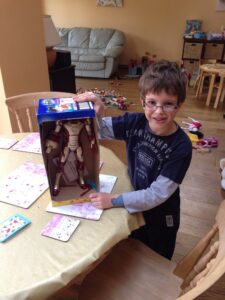 What do the kids think?

Clearly this was always going to be a hit with Stuntboy, its got lights, it fires stuff, and it looks a hell of a lot like the real thing. Apart from being slightly vertically challenged…

It was extremely easy to assemble, and Stuntboy was off playing with it immediately. He took it around the garden, and had to be warned not to point it at anybody. This is worth noting as well, don’t shot your sister in the face with the arrows it comes with – not a good plan!

It did find its way into a new home almost immediately it was out of the box. Stuntboy went to find Iron Man “a bed”, which was nice, And extremely important for a five-year old obviously.

What does mummy think?

I was very impressed with how true to the film the figure is, as well as the intricacies on the suit. More importantly, it will also take a fair bit of bashing from Stuntboy, which can’t always be said about the toys we get these days. However, I was a little disappointed with the functionality of the toy. It blasts and it lights up. That is pretty much it.

I am not really sure what else a sonic blasting Iron Man should really be doing, Clearly, it wasn’t going to quote Shakespeare at me, but I think for my £29.99 I might have expected a little more. Perhaps another set of flashing lights? Or more pose-able, pose-able arms? This could be my traditional toy bias though…. 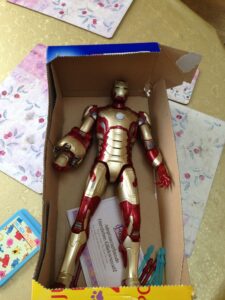 Generally, this was one of those toys that is a hit with the kids, and less so with the parents.

Stuntboy thinks its cool, but I am not sure how long this feeling will last. He hasn’t played with it a huge amount since we got it out of the box. Having said that, he tends not to sit still for long enough – he is usually jumping on his trampoline. He is not the average five-year old. I suspect for those into superheroes and Iron Man in particular, this would be a great choice of toy.

We were sent the product for review for free, all opinions are our own though. This review contains affiliate links.