We have been very lucky to be able to take a look at three games from Megableu, designed for children a little older and wiser, to have lots of fun with this Christmas and beyond.

This is a great little game; the idea is that there are three challenges set for you by the tricky little camel. Each player takes it in turn to take part in each challenge, and if they succeed, or beat their opponents, they get to take one of the bottles that the camel is carrying. If you get it wrong, then prepare to be spat at!

Be careful though, the camel does have a tendency to chuck out its bottles whenever it feels like it, so be ready to grab them from your opponents.

The game is fast, fun, and great for all the family. The camel’s challenges are based on memory, observation and speed. Not three of the best attributes for us older parents, but I managed OK, so I am sure most parents will be fine. 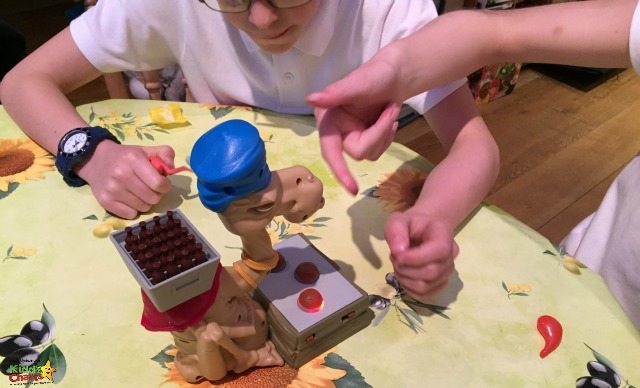 Each challenge has three levels as well, so that there is a real sense that this game will hold interest for the kids because as players improve, they can reset the levels.

This game was my kids favourite by a long, long way. They loved the idea, and have been playing it a lot since its unboxing. It is a great idea for a game; a sort of Buckaroo for the modern day! Stuntboy and Chatterbox loved trying to avoid the camel, and trying to spot whether he was about to spit at them, or allow them to reach for one of his bottles.

Overall a bit hit. Our only problem was that the middle bottles in the crate are designed to pop up, so that you have to scrabble around for the bottles randomly in the game. A great idea to add extra fun, but it was a little difficult at first to lock those bottles down in the crate, but DD worked it out in the end. 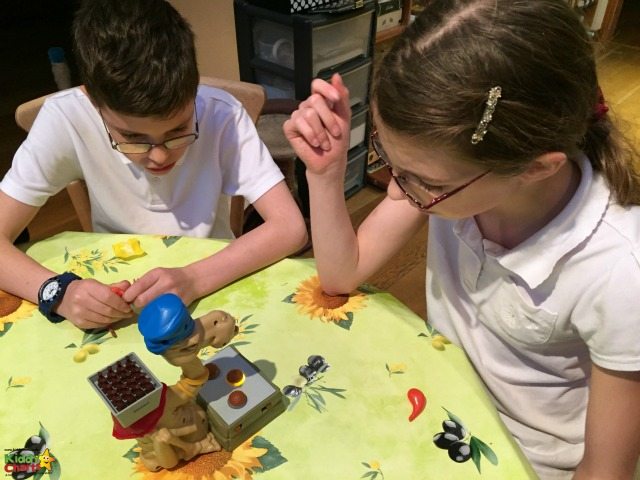 This game is for older children (age 7+), and it is definitely pitched at the right age group. The idea is that you wear the goggles, and use the gun to shoot the aliens that appear on the goggles, once the gun is synced with your goggles and both are switched on.

Friendly robots also appear in your goggles, and these mustn’t be shot, as otherwise you are penalised. Points for shooting the aliens appear on the back of the gun, as it faces you. 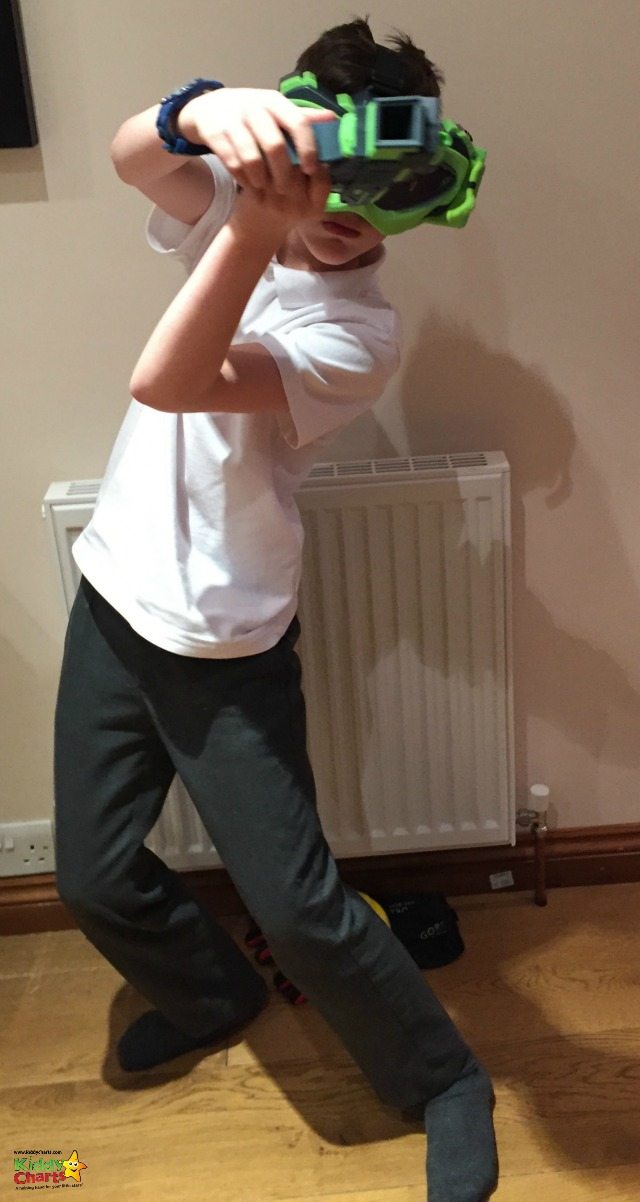 My son enjoyed playing this much more than my daughter, who struggled to get the gun to sync with the goggles. When this did occur, it was hard for her to work out how to shoot the aliens.

Syncing the gun involved pointing it straight in front of you while wearing the goggles, making sure the back of the gun was directly opposite the goggle frame. The players must hold the gun in this position, press and hold the trigger, and wait for the flashing red lights on the gun to stop.

We found that it was hard to get the gun to work, without turning the goggles off and on again between games; perhaps a reset button might be helpful for future versions?

In addition, information on what registered the shot on the gun would help within the instructions. For example, which bit of the back of the gun needs to be over the aliens for a successful shot. Because we weren’t sure what to point where, we sometimes struggled to “hit” the aliens. Having played the wonderful Ghost Hunt recently, the mechanism for shooting within this seems to be a little easier to grasp, and the projector rather than the googles more effective. Stuntboy in particular would have been happy for a Robbie Robot to project his aliens about the room. Obviously, this means that you can’t have a “mission” to explore your house and find the aliens, so we do appreciate the difference in the mechanisms, but aren’t sure that (for us) gameplay was sufficiently enhanced to make the change worthwhile.

Having said this, the idea for this game is a good one. The addition of mission cards to collect around the house adds a further dimension to the play too, but because of the syncing issues with the gun, the children weren’t as keen to try this out. Once we did though, it worked fine, though my daughter thought they were a jigsaw at first though ;-)

Adults can join in the fun too – as you can see. I even managed to score a few alien hits myself ;-) 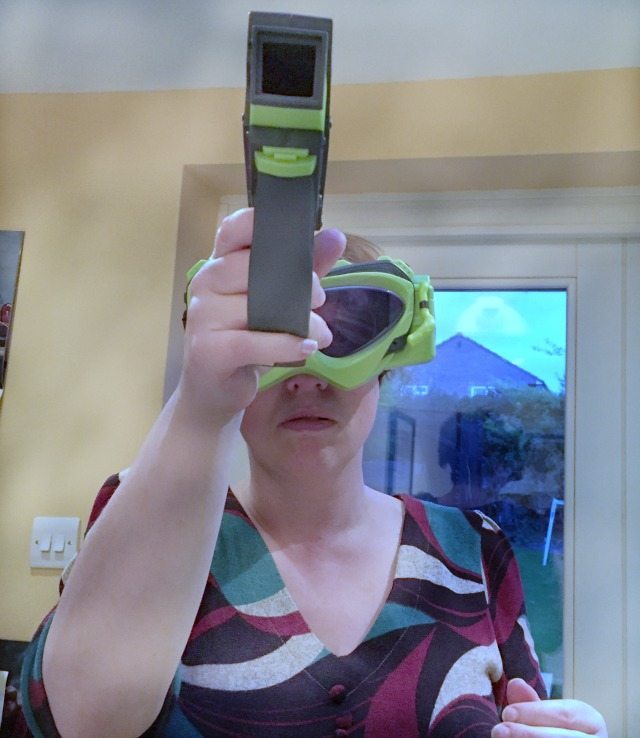 Look at that concentration! ;-)

Overall, this is a really interesting idea for a game, but the gun needs to be a little more reliable. For families who are more into this type of shoot ’em up, I can imagine that this game would be much more of a hit. I think we might just prefer to be a bit more interactive with people rather than shooting aliens on a secret mission in our homes. Therefore, the game probably wasn’t for us, but I can see it being a win-win for other families with similar aged kids, and boys or girls that like shooting at stuff! ;-)

This is a lovely little twist on the old favourite, Granny’s Footsteps! You lock the cobra into his basket, using a small plastic key, and place a gemstone on the front of his basket. The cobra’s motion detector is then turned on. Players move towards the basket slowly, only moving towards it when the eyes are green. If they are red, they must stop, otherwise the cobra detects movement. If it spots you moving more than three times, out he pops and you are bitten! The aim is to steal the gem, without the snake “biting” you. 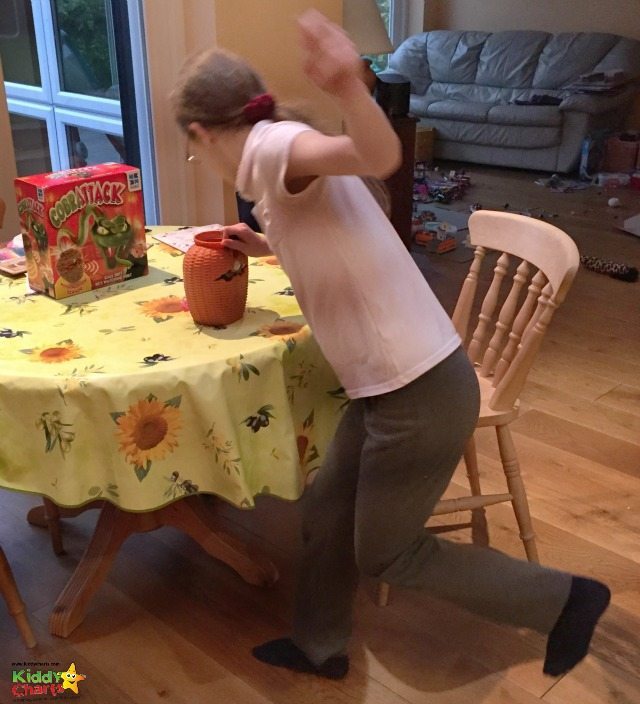 Look at my daughter go to get that gem!

There are three levels, so that as you become more adept at sneaking up on the cobra, he detects your movements more easily, making things a little bit harder for you. 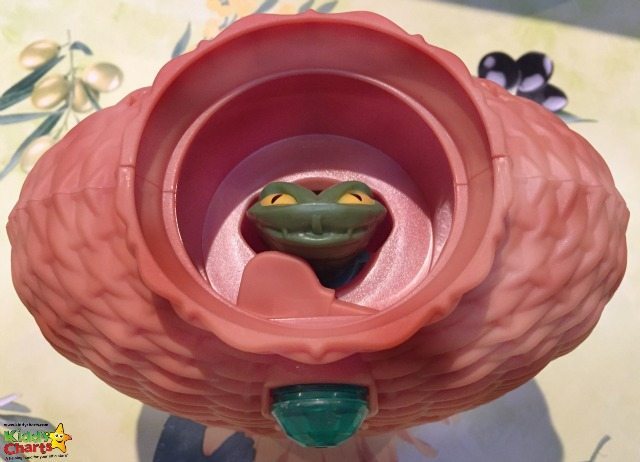 This is a brilliant idea for kids, keeping them active and moving inside, working particularly well when the weather isn’t behaving as it should.

The kids were really excited to give this one a go, and it was the first choice to play for my boy. The first few games went well, and both kids were successful at getting the gemstone before the cobra popped up; staying still when his eyes glowed red. In fact, I rather loved his red eyes….could do with them spying on the kids a wee bit if I am honest ;-) 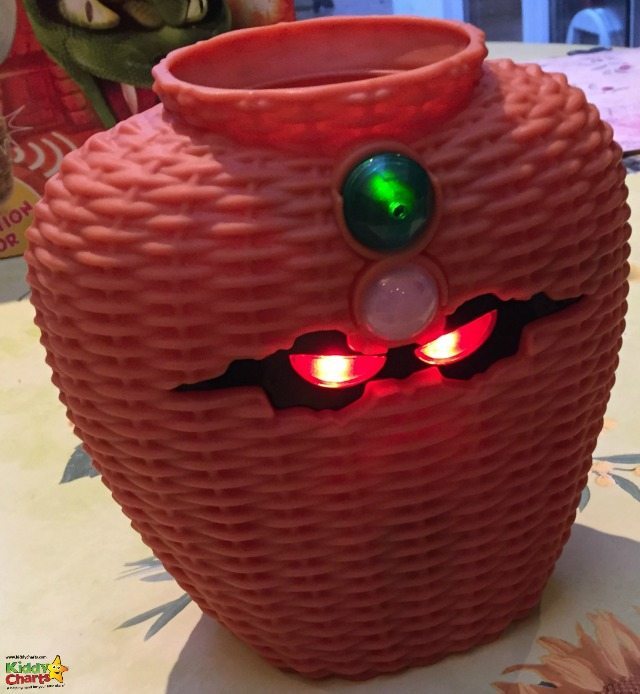 However, after this, the kids were left to their own devices to play while I cooked dinner. They soon discovered that whatever level the cobra was set to, he wouldn’t pop up. We tried everything to get the cobra to attack, but our particular cobra seemed rather sleepy ;-)

Both the children think that the motion sensor on our model is broken, so we are going to check this out with the manufacturer. There are other reviewers who have had more success, so do check them out too using the #Megableugames hashtag.

Overall, this is a great idea, and with a game that works, your kids will have lots of fun. We just need to iron out the issues we have with our version.

Rating: Unrated *believed to be faulty*

We have loved the originality of all the games from Megableu, and this set was no exception. The clear favourite was Trickin Camel, which I know the kids will be coming back to again and again, and at £19.99 presents really good value compared to some of the games on the market these days. Alien Mission and Cobra Attack are both great concepts, and I am sure would improve with both gameplay, and patience. Check the blog out tomorrow for a giveaway of all FIVE games from Megableu.

Disclosure: We were compensated for this review, all opinions are our own. This post contains affiliate links.

Now a days children's are stuck in technologies like mobile phones and internet. I dont know how to protect them from mobile phones. I found your article very helpful and you shared amazing methods. At least I can handle them and busy them in these types of interesting stuffs.

Thanks for sharing with us this informative and helpful article.... i really appreciate it ......!!!

Nice :) Its very interesting thanks for nice post here. it is definitely fun.