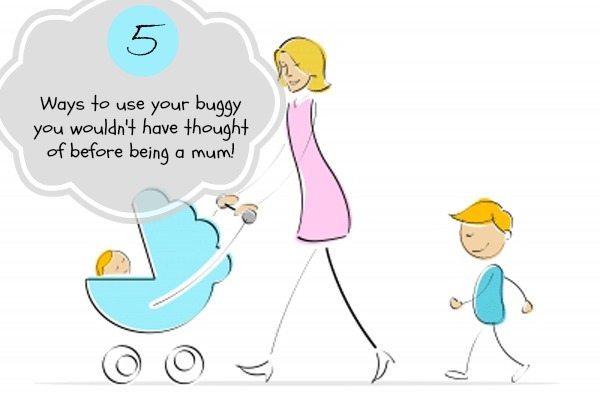 When I was a young whipper-snapper *yes I was honest*, I thought the buggy was only for pushing kids around in. It was for helping mums to get from A to B without causing a hernia.

I couldn’t have been more wrong. When I actually got myself a wee kidette, I discovered that there are a lot of things that buggies can do which you didn’t realise were possible at all….

My kids are now 6 and 8; I miss my pushchair immensely. Not because it would help me get my small moaning little person to the shops without the cries of:

I actually want my pushchair back so that I can put my shopping in something without having to fight with plastic bags that break when I put one too many baked bean cans into them.

As for draping stuff over the handlebars; well using this extra storage space means that you can carry pretty much anything. You do need to remember the laws of physics when you take your kid out of the pushchair though. Otherwise the buggy has a tendency to flip over and whack you in the face…

Now THAT phrase is a throwback to the eighties isn’t it – just like me…reminds you of those massive Hi-Fi systems right? We don’t need those anymore do we? We can now fit our “hi-fi system” inside our pockets thanks to the invention of the smartphone. However, iPhones aren’t the only entertainment system around these days. The buggy is fantastic for entertaining kids. This is for a number of reasons:

We all know that The AA is the fourth emergency service right? The buggy is critical in many emergency child related situations too…

4. The pathway to the dark side

Nope – owning a pushchair does not make you a Sith Lord. When was the last time you saw Darth Vader with a pushchair…

Introducing your child to the dark side is not what it sounds like. When your four month old needs a rest, you have a little trick up your sleeve to help them drift off.

You can make the buggy dark, safely of course, so that your child thinks it’s night-time and goes to sleep. The Snoozeshade was MADE for this. We used a blanket as I am an older bird, and the Snoozeshade was merely a twinkle in Cara Sayer’s eye when my kids were little. Whatever you want to use though, turning your child to the dark side in a buggy makes for a smoother time out and about. It is a god send.

When my kids were young, I stopped exercising. Why did I do that? There are buggy exercise classes! Clearly, you aren’t lifting your child above your head in the buggy to get muscles like Superman. THAT would be ridiculous. Apparently, you can take your pushchair complete with small person, and get back into exercise after your baby through walking their specially designed routes and programs. I am still struggling with getting fit years and years later; thank goodness for swimming, However, if I had known I could use my buggy handles as a dumbbell, I would have been managing a lot better.

Buggies are amazingly versatile aren’t they? What do you use yours for…other than transporting your child of course, because using your buggy only for that, well that’s just BORING!