Its Sunday, the day of rest – but not for us, as its Day 6 of the Moshi Monsters Series 8 countdown, and we have the utmost pleasure of introducing you to Slurpy, the Lickity Lizard – take a bow little guy… 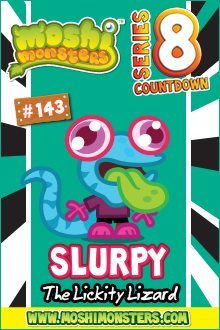 This guys is a little mad, crazy, barmy…

Apparently his mint-flavoured, rather slimey, wee skin, is covered in a very icky slime which also sends you a little bit Doolalie – so he is the maddest of the Moshi Monsters Series 8 moshlings because he had a tendency to lick his own skin. Not very good when it sends you stark raving bonkers. As a result, he spends most of his time jibbering like a fool! ;-) Even madder than Grinny, whom we showed you yesterday.

Personality: Totally potty, and a wee bit irrational, oh and not to mention, ever so slightly hare-brained as well

Like: Dancing on the ceiling and crawling up walls

Slurpy and his rather disgusting tongue seems to be a bit of a hit with Chatterbox..

Do you like Slurpy too? What is your favourite Moshi Monsters Series 8 moshling so far? Do let us know? And don’t forget to subscribe to the blog or check Twitter for the next day of the countdown tomorrow. :-D