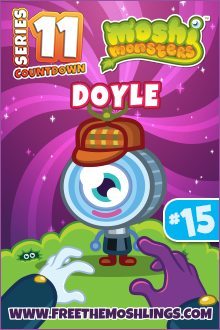 Yesterday, we say Bonnie make her first appearance in Moshi Land, and today is the turn of Doyle, the bumbling and ineffective detective. Obviously, Doyle looks rather a lot like a magnifying glass, and you might expect that this would aid him in his detecting, but he is most definitely a defective detective. If you want something solving, don’t come to Doyle, he will be bound to make a mess of things! Their magnifying glass isn’t even working properly, and instead of making things bigger, it manages to make them look smaller, so no wonder they keep getting things wrong all the time.

Habitat: Generally they are found within Deerstalk Drive – thanks to their rather lovingly tribute-d hats; are you watching Benedict? They are also very keen to search for their clues within the Googenheim as well; though given their detecting skills, it is highly likely that they won’t actually find any.

Likes: As would be expected for a famous detective, these little critters, love to play the violin. They are also partial to pipe cleaners…perhaps also in hommage to the famous Sherlock Holmes

Dislikes: They aren’t too fond of fingerprints that have been smeared, as it means they can find their clues properly – though they can’t generally anyway. And Surreal Snoopers aren’t on their lists of favourite things either.

So ends the countdown for today, come back tomorrow and we will release another series 11 moshling – who will it be?