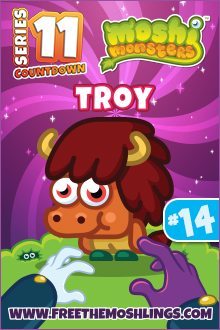 After being deduced to death by the delightful Doyle yesterday, we are taking a very different turn today as we introduce you to Troy, the macho minotaur. Troy believes himself to be the strongest wee moshling in Moshi land, and used to be employed to look after the hoards of Rox that were hidden in the maze beneath the Puzzle Palace. However, they aren’t required for such ancient tasks any longer, and generally make their living from their hair, selling it to make wigs. They have even been known to take part in the odd moshi panto here and there too. There just isn’t a call for bullheaded bodyguards amongst the Moshi’s anymore, so these poor wee fellas have to make their bread elsewhere.

Habitat: Moshipotamia and its mythical shores can be a great place to spot these butch buddies, alternatively take a quick look in the hedge mazes at Puzzle Palace and you might spot one

Likes: Anything maze-y, including the mazes themselves of course, and classical theatre

Dislikes: Don’t touch the hair! In otherwords, they don’t like hair clippers. As they are sooooo veeerrrryyy butch, bring anything pink near them , and you might just have a riot on your hands… Today we have had manly moshlings, what is in store for tomorrow, do come back and see won’t you?