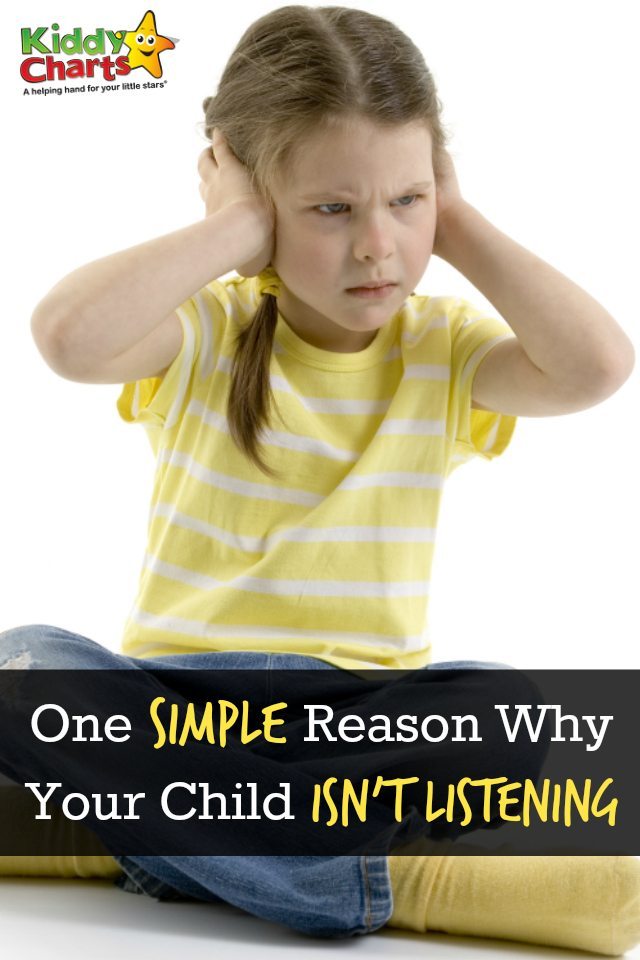 Isn’t it amazing how words like ‘ice cream’ or ‘park,’ or anything else that strikes kids as fun are heard right away. While anything boring, like it’s time to clean up your toys or go to bed, can sail right over their heads simply by your children pretending they never even heard it in the first place.

If you’re a parent that seems to have children with cloth ears, let me first assure you  you’re not alone. Not listening to Mom and/or Dad is one of the things that I see parents struggle with most. Mom and/or Dad frequently complain that no matter what they ‘say,’ their little person runs off and does whatever it is they want anyway, completely tuning them out.

Many parents first notice this when their child starts wanting a degree of independence, as in the toddler age group. Now it’s true, toddlers do get distracted so sometimes they simply don’t hear because they are fully locked on something else. I have to say, I wish I still had that kind of single minded concentration as I might get more work done.

It’s not just being distracted

Still, at one point, you’re likely to notice a more deliberate kind of not listening. The type that you’re sure they hear, but they decide it’s in their best interest to simply ignore you anyway because something much more interesting going on.

That’s because your toddler is beginning to notice they are really a fully separate entity from you. They can do simple things on their own and that’s an exciting and powerful feeling. Along with this heady appreciation of their burgeoning independence, they also figure out that just as they can do things you want, they also can refuse to do those things as well, something that’s likely to drive even the most reasonable parent up a wall.

This new obstinacy usually comes with a lot of ‘no’s’ and a few meltdowns thrown in. It can even generate some interesting exasperated expressions or other strange behaviour on the part of mom and/or dad, especially if the toddler makes a big enough fuss by throwing their arms and legs around a bit.

At first and depending on your child’s personality and your reaction to them, you’re likely to get a mix of obstinacy and not listening, but as children age they become far better at just the ignoring part, until many parents swear that if a degree could be offered in ‘not listening,’ theirs would get a first.

By not listening consistently they are sending you a message

But don’t worry, there is hope. Understanding the why’s of not listening is the first part of making sure you are finally heard. With any child, listening forms part of how your child relates to you generally, so you can use it as a barometer to find out how you’re doing.

Let’s say you’re being ignored constantly by your four year old. Well, that’s because your four year old has learned that you likely don’t follow through on what you say. Now let’s look at this from an adult perspective, so we can see clearly how this develops.

Imagine if you have to take a week long class for your work and every day the class is scheduled to start at 9 AM. As asked, you show up promptly at nine but the instructor doesn’t and finally turns up at ten, making a lame excuse. At the end of the class your instructor details how important promptness is to your success and encourages you to be there on time the next day.

The next day you again show up at 9 AM, but again the instructor doesn’t make an appearance until 10 AM with various excuses. You feel irritated and ask whether Wednesday’s class will start at 9 AM or 10 AM and they indicate the earlier time. How long are you going to listen to that instructor or are you going to judge them by their actions instead of their words?

Now look at your children

If your four year old isn’t listening to you at all, then the chances are you’ve trained them not to listen by being inconsistent in exactly the same way. Many children’s listening skills lie in the middle with the consistency dial needing a minor tune up on the part of mom, dad or caregiver.

Now don’t think I don’t understand how difficult being consistent is. One moment you are feeling able to conquer the world, so you put up with the whining when they want a chocolate bar before dinner without giving in. The next, you pass them the crisps just to get them to be quiet as each whine seems to pierce your head like a ballistic missile. One second you’re a tower of strength, calmly pointing the way to your expectations they put the toys away. The next, the kids are jumping on the sofa, screaming ‘no’ and using your defeated body slumped in the chair as a route for their toy cars.

But just as it’s difficult to be consistent at the best of times and even harder when you’re sick or tired or under the weather, doing so is an integral part of being a good leader.

Does it have to be 100% all the time? No, but there’s a line and when you cross it, suddenly the children know that no matter what they do, all you’ll issue is platitudes, threats or entreatments. It is this ONE thing that helps your children to be so much more likely to listen to what you are asking them to do.

If your children are consistently not listening to you, then you’ve crossed that line but don’t panic there is a way back. That route is a tough one on all concerned but it is doable and it’s very much worth doing because it determines so much down the road. Getting it right early can make a world of difference. A behaviour intervention can make it easier but the bottom line is to make your words count again and there’s no telling them that, there’s only showing them, calmly and consistently over and over again.