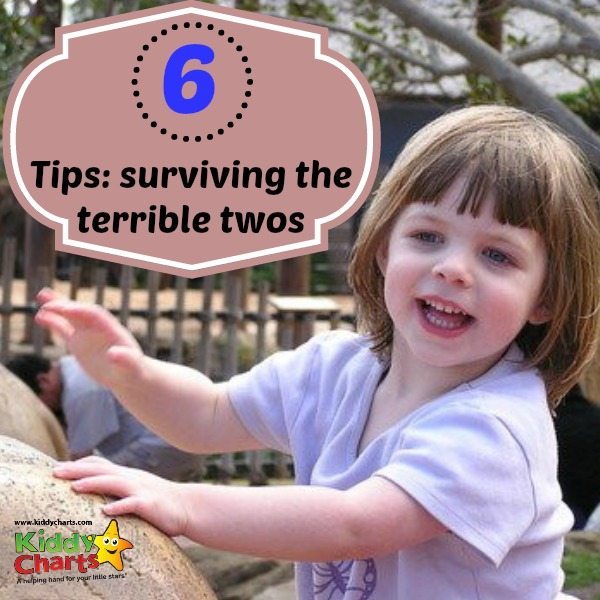 Everybody knows about the terrible twos; we are warned, but we never quite understand until we are right in the middle of it.

It was my little girl who had the feisty gene; her tantrums were the stuff of legends. If she didn’t want to do something, the whole world knew about it.

Once I made the mistake of refusing to buy her a piece of cheap, plastic tat in a shop. It was just a small pink butterfly badge. Not having it was the end of the world; cue a very loud, very public meltdown. She yelled for the full thirty minutes it took me to walk her home in the buggy. She was two-and-a-half years old, and I think I aged by the same amount trying to ignore the screams all the way back to the house!

This taught me the hard way that to get through the terrible twos meant that us mums had to be more resolute than our toddlers. Easy? Not a chance!

I resolved to stick to six simple rules for survival, and I use them even now.

Ignoring tantrums was the only way to get them to stop without creating another problem. I didn’t want her to think they worked.

I had to turn my back, do something totally different, even move into a different room, or put her in one. I stepped back and left my little girl screaming blue murder. That meant she could burn out the tantrum safely, and I wasn’t reacting to it.

Not easy to do, but very necessary.

I only stood my ground when I needed to.

Did it matter that my daughter wore a princess costume to the shops? No, so I let her.

Did it matter that she held my hand when walking to those shops? Yes, so I made sure she did.

Only insist on the things that are really important to you, and them; particularly if their safety is involved.

Stick to your guns

It might sound simple, but when there is a screaming two-year-old involved, it’s not that easy. However, if you cave in, that two-year-old will know that screaming gets what they want.

That means the screaming won’t stop. And we don’t want that.

“Hit me again, and we will leave your friend’s house.”

If I made a threat like this, then I kept my promise if she didn’t keep her half of the bargain.

It’s important to never make empty threats. If you do, your child will know that you aren’t serious about the consequences of their actions.

Distract or head them off!

When your child is smaller, you can sometimes distract a tantrum before it starts by pointing out something bright, shiny and interesting:

“Look, there’s the cat, doesn’t he look funny playing with your doll!”

There was many a time I wish we’d had a pet earlier in my children’s lives as they come in handy as a distraction technique.

In addition, if there are particular flash points in your toddler’s life, then avoiding or being prepared for those events can help.

My kids took ages to go out. I would try and allow extra time to get ready, so we didn’t wind each other up over it.

Observe your toddler; if particular things cause tension between you both, think ahead.

Show them by using pictures

Both my children react to new situations with trepidation, tantrums, and tears.

In their terrible twos, they also didn’t seem to be able to understand some things without being shown them visually. I used visual clues to avoid the tears caused by this lack of understanding.

My children are now seven and nine, and thanks to these principles, we’ve made it unscathed….well, for now at least!

Note: this article first appeared on the Yahoo Contribution Network, authored by Helen Neale. It has been reproduced by permission of the site, where it is no longer available.

I think ignoring some of the behaviour is the best thing you can do as a parent. They soon learn how pointless it is to through a hissy fit. Luckily, Amy grew out of them quite quickly.

Thanks for linking up with our Parenting Pin It Party x

My little boy is just about to turn 2 and I have definitely noticed his behaviour change lately! These are fab tips, choosing my battles has always been something I've done, sometimes a battle over something little just isn't worth it!

Thankfully my daughter hasn't been too bad with tantrums - though she has her moments - but I definitely agree with some of these tips. For me, it's been working out what really matters and when to say no, then sticking to that or any discipline etc afterwards. Only a few months til she's a threenager now!

Great advice, with my kids it was the terrible threes! I remember very well the tantrums when I would not allow them to buy a toy that was either rubbish or just too expensive. Commented from Comment Monday on Flea Ents Bulletin Board