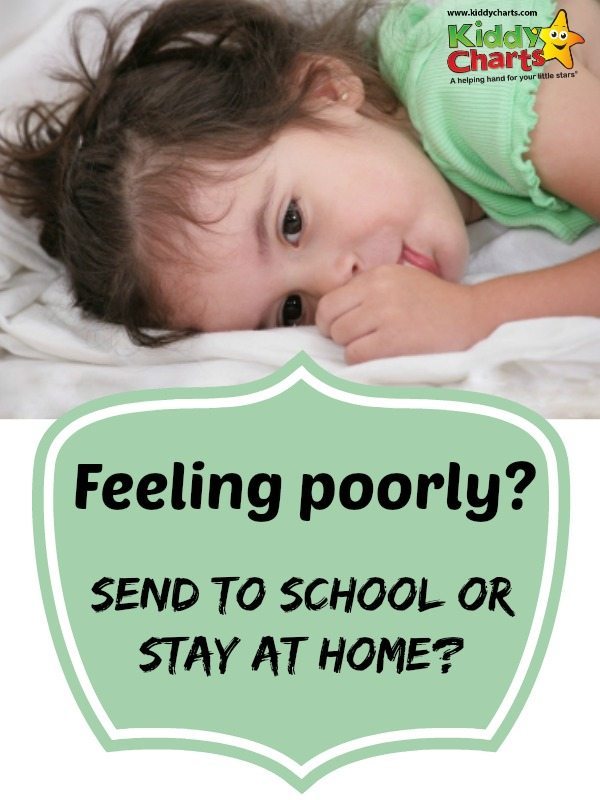 I thought we were done with the winter colds and fevers but alas, no, here in spring term and I have my youngest off. All 3 had days off towards the end of the autumn term just as the Christmas productions were beginning.

He has been complaining on and off all week about not feeling well but there were only vague symptoms. School sent him home on Wednesday afternoon (after he had eaten his lunch) but he came home, had a short rest and then ate apricot jam on toast and still wanted to go to Grandparents for tea as planned.

Does that make me a mean Mum? I’m not the best with vague symptoms, I like clear signals – a temperature, throwing up (but only occasionally – too messy), a streaming cold, etc

I don’t think I am too mean, but then maybe I am biased. If they do miss school, I am clear that they then miss any evening activities like Brownies and Beavers and play dates are cancelled. Not everyone does but my opinion is….

“if they are too unwell for school then the same applies for the other things; let’s keep the bugs to ourselves.”

I try to limit the amount of TV and electronic games they play, but that can be a tricky one, especially if I am trying to work from home and need to get things done.

The poor dog suffers as well; he may only get a very quick once around the block kind of walk, but then again he does get company all day. So perhaps he doesn’t mind too much, but unfortunately he can’t tell me.

So, today with a fever and being generally out of sorts …the day I had originally planned on popping into town, and then playing my regular Friday afternoon tennis….well that’s out the window!

I think that we will have a go with getting a bath bomb kit and some soothing lavender, as by the end of the day I may need a nice relaxing lavender bath. That way I have something to look forward to after my unplanned cabin fever of being shut in the house all day.

What do you do if your kids produce vague symptoms of being unwell?  Do you keep them at home or send them to school?

It's a tricky question, but if they don't appear too bad, they will go to school for me and if they're off, they'll most certainly be staying home for activities too. Same rule applies for everything, not just school. It's really difficult know when they are healthy enough to go to school and when they're actually too poorly x

Thanks for linking up with our Parenting Pin It Party x

Ooh it's such a toughie... I've always erred on the side of caution and kept M off if she's not feeling great... but she's only just five, so I don't think it matters a massive amount if she has a day off and also I'm lucky enough to be able to juggle my life easily enough to be home with her. But about a month ago, she completely hoodwinked me... she was 'desperately unwell' until after I'd called the school, but from that point on she was bouncing off the walls. A friend with a child the same age had the same thing happen to her. So, yip, it's a tough call!!

It is sooo difficult isn't it, Luci - I have to admit that I tnd to send mine in, and see what happens... *bad mother* ;-) Perhaps that's why they have so few days off school - but they also tend to want to go in too, as we get certificates at school and house points for attendance now they are older! :-D