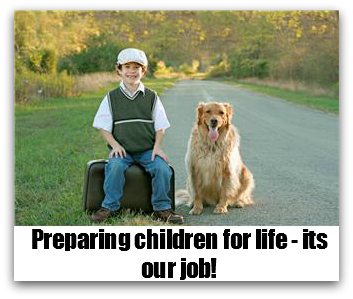 Preparing children for life as they get older is part of our jobs as parents, wouldn’t you agree?

Our eleven year old left yesterday morning on his residential trip, we won’t see him or speak to him until Friday. He has been away without us before for sleepovers with grandparents, uncle and aunt and on cub camp. But for some it will be the first time away from their parents and that can be a little bit stressful for both the child and parent.

He will also start secondary school in September, so I have started to let him walk to and from school on his own. Last week at half term I let him and a friend cycle to the recreation ground near where we live, we meet them their about an hour later.

It is a bit of a challenge to let go, to trust them; our natural instinct is to protect them, but our ultimate goal is to send them off into the world.

Even when they are younger we are preparing them. Often, when crossing the road, I have asked the children to look and tell me when they thinks it’s safe to go so they learn and judge for themselves, and don’t always rely on me.

There are even the smaller things when they are younger like:

Sometimes it feels they have grown so quickly that the last ten years have flown by. People always said it, but until you have gone through it you don’t quite believe them. There are some things I love though….my older two can both make cups of tea and they are both allowed to go to the shop to buy the milk we forgot earlier!

Image above courtesy of Microsoft Clipart.

How do you feel you help prepare your kids for the big wide world? No matter how small, or big those lessons you teach, they are all vitally important to learn…