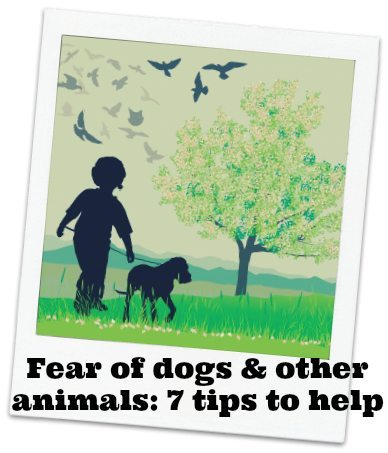 If a child doesn’t have too much exposure to animals – it can mean that they get frightened of them early on in their lives. The fear of dogs, and even cats isn’t that uncommon.

They may even have had a bad experience when they were younger and its meant that they are really worried around a particular animal.

With both my children, dogs were a problem, but with friends its cats, and it could even be something innocuous to us, little a rabbit, that can upset a child.

My experience was particularly worrying; I had to be so careful near roads if my little boy saw a dog. There was clear danger that if I didn’t hold on to him, the fear of the dog would mean he would have run into the road. When this first happened, I had to grab hold of him hard to stop him from doing so, right in front of a car….

Owners who just let their dogs roam, and actually run towards children – the bain of my life! Sometimes people don’t understand that no matter how gentle they know their dog is, the child who is afraid of them doesn’t understand. Many a time I had to shout to owners to get their dogs away because Stuntboy was screaming blue murder…

You know that. I sort of know it, but he DOESN’T and all he sees is a dog running towards him…

Adults can be worried by things they don’t understand or haven’t had experiences of before so why not a child?

Here are some tips to help:

Patience, as with all things kiddie, is the watchword here.

I never thought my little guy would ever be comfortable with dogs. Stuntboy is now quite happy to walk past them at the park, and even strokes them when the owner lets him.

How are your children with animals? Does it bother you? Do you have any tips you would like to share?

Search engine is under maintenance - try again in a few days.