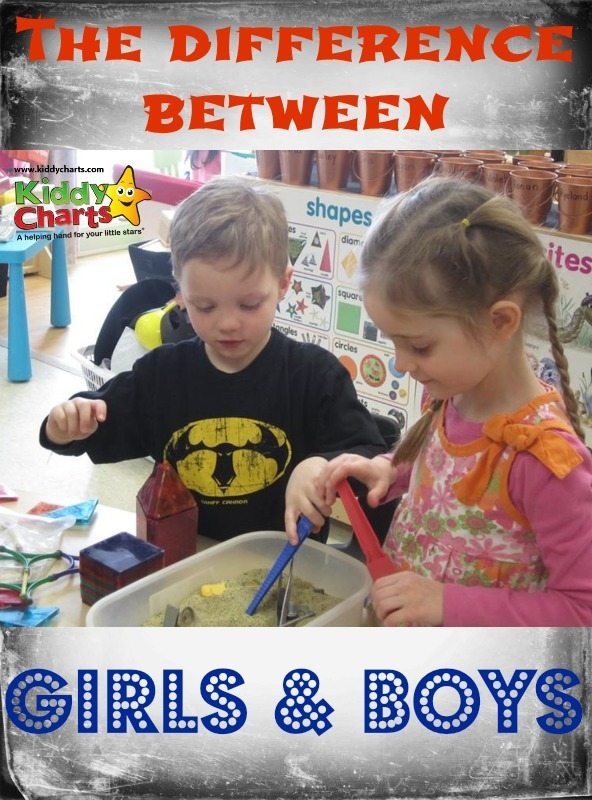 Developmental milestones differ greatly between children as a whole, but what about the differences between boys and girls?

We always ask each other in the car on the way home from school what each child liked best about their day.

A while ago, my youngest, at the time, a boy of five, said:

And my little girl, who was seven, said:

It’s been this way since they first entered the world pretty much. My son never stops moving, and is at his happiest when running, usually away from me! My daughter will concentrate for hours, and has an amazing capacity to learn; she can even sit still for longer than five minutes without exploding…

People always tell you that boys and girls are different; you just don’t realise how much until you have one of each for direct comparison!

My boy focuses on being the best at everything and anything physical. He bounces as soon as he gets up in the morning, strains to sit still and learn during lessons at school, and then releases all that energy on his unsuspecting mum and sibling when he gets home from school.

My girl puts all her considerable energy into anything to do with communicating, whether it’s speaking, reading or writing.

My son even moved about more inside me than she did; kicking has been a favourite pastime of his ever since!

Physically, he was always a bit of a handful. Somehow, my daughter knew it wasn’t wise to crawl downstairs when she learnt to crawl at eight months.

We never got stair gates with her, we just didn’t need them. She knew not to even bother to try; perhaps an innate sense of fear – who knows.

However, within a week of my son learning to crawl at seven months; we had bought them. He had a little bit of an argument with the top flight of our stairs. Luckily we only have a few stairs there as they have a corner. My husband didn’t turn his back to turn the taps off while running the bath again after that…

From then on, all my son’s physical milestones were reached sooner than my little girl hit them.

Communication was her talent, and it still is. As my daughter was our first born, there was a time when we were worried about my son’s speech.

We only had his sister to compare his development to. We tried not to do it, but always end up doing so, in-spite of ourselves.

She had used single words, then short two-word sentences, and then complete, if slightly disjointed, sentences before she was two. He was only just learning to talk at the same age.

We were reassured by health visitors that he was just concentrating on “being a boisterous boy”and he would catch up in the end.

He was putting all his energies into learning to use his fine motor skills, and some of his gross ones too. He was walking before he was one, and running a very short time after. He soon learnt to throw and catch a ball, hold a cricket bat, and even use a bike. In fact, he was riding a bike without stabilisers at three. Even now, he can still run faster than his sister; who is nearly two years older than him.

Despite our concerns, his speech is now just as it should be for his age. I do suspect though that he will always struggle to get a word in with his sister; she isn’t nicknamed Chatterbox for nothing…

But then, we call him Stuntboy after all….so each to their own!

I continue to ask – is this a boy thang, is it a girl thang OR is it just a different person thang? My friends tend to concur that their boys are physical and girls more thoughtful? Is this really the case, or are we trying to pigeon hole them into what society tends to feel are the gender stereotypes?

I would really like to hear what you all think – do you have boys and girls, do you see a difference between the genders, or is it simply different personalities?

Note: this article first appeared on the Yahoo Contribution Network, authored by Helen Neale. It has been reproduced by permission of the site, where it is no longer available,

That's interesting, mine are the opposite though. My little boy has a much longer attention span than my middle daughter who doesn't stop moving :-) So funny how everyone is different.