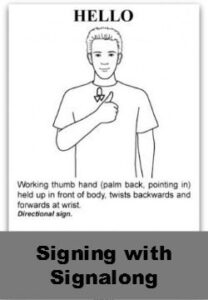 When my toddler Mr T was 2 years old, it was clear he had a lot of difficulties with communication. Although he didn’t have a diagnosis as yet, we were able to have home visits from Portage who are an educational service for children with additional support needs and their families. Our local portage team used a lot of signing and they suggested I go on a course to learn more and help support Mr T in his communication through sign, as he was finding verbal communication so hard. In our borough the language used is signalong rather than Makaton, which seems to be more widely known these days (maybe due to Mr Tumble!). There is a lot of shared vocabulary between the two languages and signing works in the same way with both of them, but Signalong is actually a more extensive language with a greater volume of signs.

Putting that effort into learning Signalong and signing regularly with Mr T throughout the day was one of the best things I could have done for him. He really began to take to it quite quickly, and once he had grasped the concept he would easily absorb the new signs. It opened the door to communication for him, as before that he really had no way to make himself understood other than crying or making noises which we couldn’t understand – which of course is really frustrating for both the child and the parent! 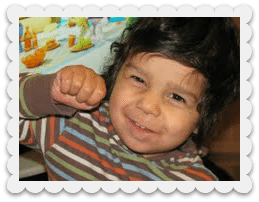 I have heard a few misconceptions that using sign will hinder speech development, and from my own experience and from studies that have been done, it totally does not. The key is that while signing, you must always say the word alongside the sign. Signing does not replace speech, it compliments it and works alongside. Signing also helps you to slow down your speech and simplify your sentences, which is good for speech development anyway. With Signalong and Makaton, you do not need to sign every single word in a sentence – just the one or two key words.

To learn signalong we first had to learn about the hand positions and names for each hand (working hand and supporting hand) as this would enable us to read signs from the textbooks later and know how to perform them without necessarily seeing them all demonstrated. We practised all of the basic vocab in the groups and it was quite easy to memorise as a lot of the signs are pretty instinctive. With those that are a bit less intuitive, I still found after doing them a several times I would memorise. Even after signing with Mr T for a couple of years now, I will still find vocab that I am unsure of and do have to ask for a few words or even google them but we have a fair amount covered!

Another misconception I have heard from some is that signing does not work for children with Autism. I won’t claim it will work for every child, but signing is very visual and for Mr T it seems to work brilliantly as a means of visual support. It seems like doing the actions and seeing the words being signed in front of him helps Mr T to understand and process words and their meanings. The first time he joined 2 words together, it was using sign rather than verbally. It was an amazing moment, I felt like I could almost see his brain whirring as he slowly signed one word, paused and slowly signed another to follow on!

Anna is a London-based stay at home mum to three boys. Her fabulous blog In The Playroom is a parenting and lifestyle blog, about playing, learning, and life with young children. She shares kids crafts and activities which are simple and easy for any parent to do with the supplies you probably already have in your home. You can follow her on facebook, twitter, and pinterest to see all the lovely crafts and activities she does!

I used to work with deaf children and children with deaf parents, and I totally agree that it doesn't delay speech. Even after waiting to have Grommits children would be at the same verbal level as their less advanced peers by 6. Hearing children with deaf parents would pick up spoken English really well in Nursery, even if they hadn't used it before and then they end up with the advantage of 2 methods of communication when others only have 1.