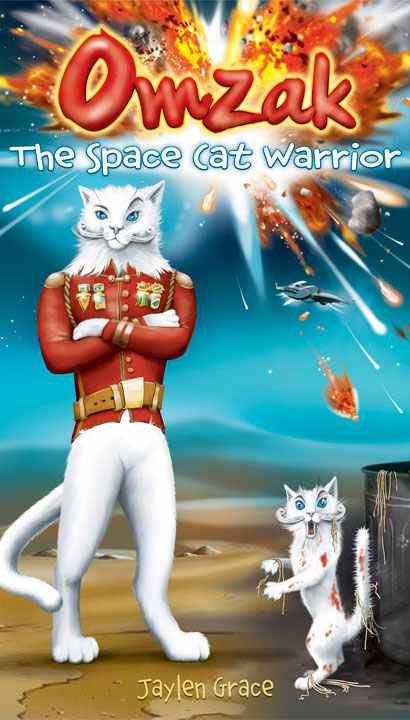 We received a book to review a few weeks ago: Omzak the Space Cat Warrior by Jaylen Grace. It’s out on October 25th, 2012.

I have to admit I giggled a little at the title of the book; but that’s probably because I am a wee bit childish…

So what’s the story?

Omzak is, erm, a space cat warrior…odd that give the title of the book.

He got into trouble on his planet, Catopia, and was banished by the king to Planet Earth. His ruler was hopeful that having to hang out with the rather less sophisticated earth cats would teach him humility. He befriends a little girl called Jodie, and becomes embroiled in solving a mystery as the earth cats start to disappear.

What did the kids think?

I am afraid that neither of my children liked this book enough for me to be allowed to keep on reading it to them. Sadly, we had to ditch it.

However, I don’t think that this is necessarily because it’s poorly written. It’s just not their thing, and they were a bit too young for it. As Chatterbox said:

“There aren’t enough pictures for me, mummy”

And that pretty much sums it up. Their attention just wasn’t kept long enough by the prose, as it’s that wee bit too complicated for them. I believe it’s better suited to 8 – 12 year olds. My son is 5 and my daughter is 7; enough said.

The story is a trifle bizarre.

But perhaps that’s my lack of imagination. I prefer magic, witches and sorcery; so maybe I need to expand my mind.

I suspect that older boys who like playing with light sabres and watching Star Wars might like the story. However, the idea of a Space Cat Warrior just didn’t capture my imagination, or my kids. There are some good lessons within the book, if you manage to get far enough into it to learn them. For example, Omzak learns about friendship, forgiveness and pride during the course of the book. And the little girl, Jodie, is able to heal a family feud as well.

So mummy wasn’t convinced either. But then I am not an eight year old boy ;-)

This book was written well, but idea for the story just didn’t work for me. And that’s a personal thing. Because of this, the characters didn’t come to life sufficiently for me to be able to really “get into it.” If there are any more books in the series, I wouldn’t feel the need to find out what happened.

Have you read this book or others by the author? What did you think?