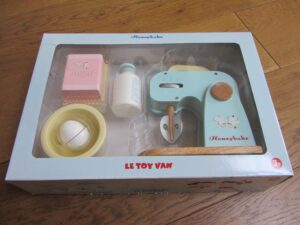 I think I may have said before…that I don’t do baking. However, I do pretend baking…even I can’t stuff that up as it requires just a pinch of imagination, and very little skill. So Chatterbox and Stuntboy were very pleased to get the opportunity to review the Le Toy Van Mixer Set from www.dollhouses.co.uk. This is a great reward for our progress charts as its ideal for any toddler kitchen; so check them, and it, out!

You get a mixer, with a bowl that you can take out, an egg, which splits in half thanks to some canny velcro, some play sugar, milk and flour. The milk lid comes off too; that’s the canny velcro again… There is even a dial on the mixer which allows you to…erm…mix.

What you do next is all down to your kids wild and crazy imaginations….

This was easy – apart from the usual fumbling with the packaging. However, I have seen a lot harder toys to get out of their boxes, so plus points for that. It wasn’t attached with industrial grade staples for starters…

This would be fantastic for 3+ and at least up to 8/9 depending on how enthusiastic your child is about play cooking. My Chatterbox is seven, and she is having a ball with it.

Definitely. It’s been a massive hit. Within about 5 minutes, they had turned the box into an oven to put the pizza that we already had to go with the cake that they were making. Chatterbox was particularly impressed that:

“If you put the bowl in the mixer and the egg in the bowl you can use the thingy to turn it round and mix it all up and the egg breaks and mixes. Cool”

We have only had it for a week, but they played holiday today and it got “packed”. Praise indeed.

It’s wooden. It doesn’t make any annoying plasticy sounds. There aren’t small bits that can be left around the house for me to stand on. It looks good enough to go in any real kitchen nevermind a toddler kitchen and it feeds my kids imagination. Nuff said.

9/10 from me too. Le Toy Van is a wonderful, sturdy wooden toy manufacturer. And if this toy isn’t perfect to pass on to friends after my kids have had good use out of it, I’ll eat the egg that comes with it. And I don’t even like eggs.

Why not a 10? Well I don’t want to do that. No toy is perfect. And this is a tad expensive for some budgets. However, its not a budget brand, its a sturdy, throw it at the cat brand and it doesn’t break. However, I did feel that the price meant it wasn’t to everyone’s cup of tea. :-) 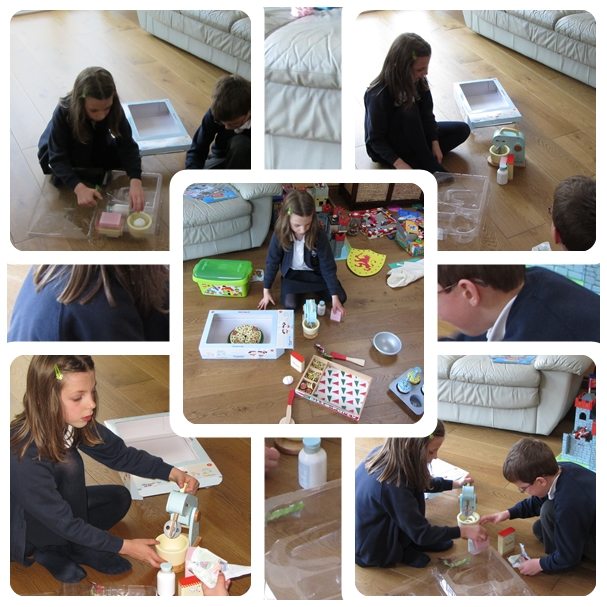 Toddler kitchen: Having fun with the mixer set

Do you have this toy? What do you think of it as an accessory for your toddler kitchen? Did you like it? If you don’t have one, I hope this review was useful and helped you to decide whether or not to get it.

We were provided the mixer set for the purpose of review. All opinions are our own though, naturally.