Ever since I was a student, I have had two weaknesses:

Me and Smokey Bacon crisps had a love affair at university and we are still going strong, with the occasional flirtation with Prawn Cocktail flavour just so they don’t get complacent.

I was therefore rather excited to be sent the new Walkers crisps because they were potentially better for me. Clearly something that is crisp like and lower fat is good for my waistline. But even better, its good for the eternal guilt I feel for limiting my kids crisp chomping when I am secretly nibbling the Smokey Bacon when they aren’t watching….

Walkers Baked Hoops and Crosses are a new snack that comes in three flavours:

They are made from 57% wholegrain corn meal; so a wheat based snack – though to me they still are rather a lot like crisps, so they aren’t really going to be something you would be wanting to give your kids everyday. Wholegrain is important for kids to get in their diet, helping to fight off disease, and improve bowel function *too much information.* According to Walkers, 27% of kids don’t get ANY wholegrain in their diet. I find this rather staggering to be honest, and more than a little worrying. Poor little mites. :-(

Though, these baked crisps are a more healthy alternative to the potato snack, they aren’t a substitute for getting a fibre-rich diet, of course. But they are worth having in the mummy locker…

They have c. 84 calories, which is less than the average bag of crisps, its 131 for a 25g bag of Cheese & onion Walkers for example (Source: Nutracheck). However, the Hoops and Crosses bags have 18g in them which explains some of the difference at least.

Is Dora the Explorer slightly obsessed with pink? Of course they liked them – they come in a packet, the look like crisps, they taste like crisps and the kids haven’t a clue that they have less calories than crisps usually have, so as far as they are concerned they are crisps. Which means that we better eat them fast before mummy changes her mind about whether or not we can have a whole packet now ;-)

As you can tell, as soon as Stuntboy saw them, he was rather keen to eat them…forgetting his please rather excitedly!

Yes, is the simple answer. Both to eat them and play the them, watch out for that snake, he’s after them! 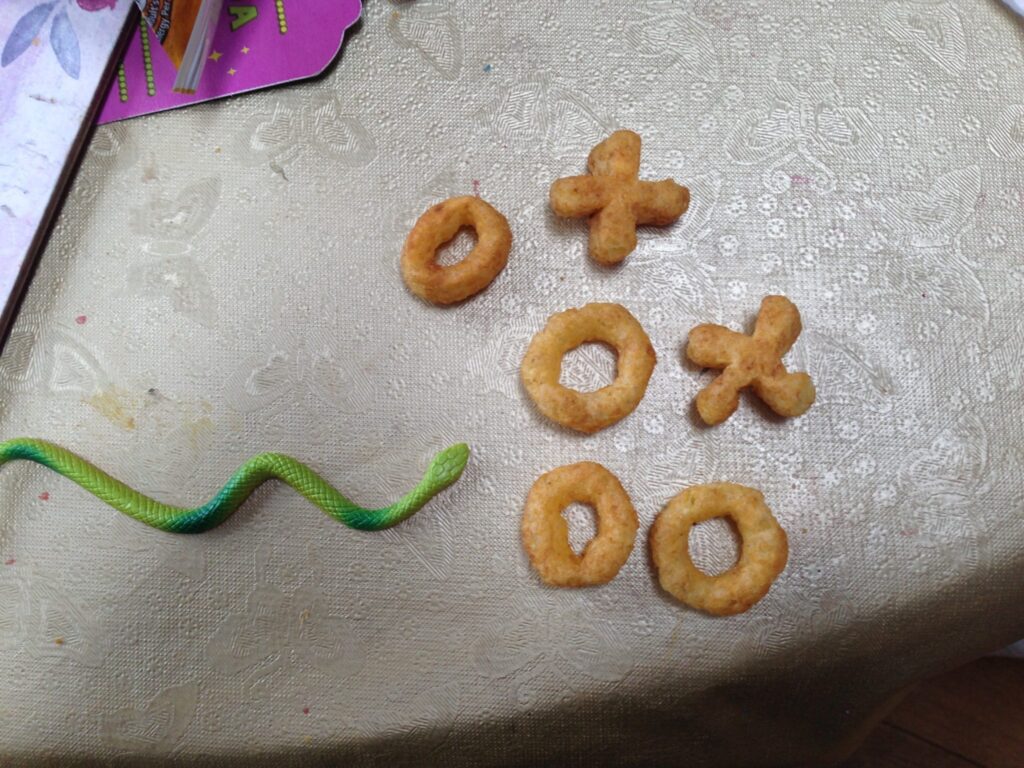 Oops, sorry, that’s not what we meant it is? They are great tasting, and a good alternative to the higher calorie content standard crisps. They are also fun for the kids, which means that they may actually choose them above the alternative crisps in time. So a thumbs up from me.

The bag are colourful as well; which is an added bonus. Kids tend to be drawn to brighter colours…as do mothers searching through secret snack cupboards….

A good alternative snack to the traditional crisp, so we’ll give it an eight; however, it is not to be thought of as a healthy snack – healthier yes…but I would still go for a banana or apple if I had the willpower for myself that I impose on my poor kids!

We were provided with the crisps for the purposes of this review, as well as being paid for this post. However, all the opinions of the crisps are my own.