[pullquote]I’m really impressed with the phone, as has been every other mother who has seen it or I’ve talked to about it.[/pullquote] 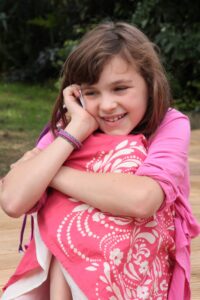 It seems our children are ‘requiring’ more and more whizzy phones at an earlier and earlier age these days, so phone company CyCell have come up with a simpler solution – not just for children, but for all walks of life. Zoe, aged 11 (10 when we got the phone ;-) ) and Mum trialled 1stFone, designed for children from age 4 years. There is also a OwnFone, aimed at grown ups and versions aimed at seniors and the workforce too.

1stFone is a small personalised phone, the exterior design of which you choose yourself from a large selection of colours and patterns (or upload your own image), with 2, 4, 8 or 12 pre-programmed, pre-labelled buttons (inlcuding 999 if required). These pre-programmed numbers, chosen when you order, are the only ones that the phone can call and which can call the phone. There is no screen, no text or internet capabilities, just a phone, pure and simple.

The buttons can be labelled with words, photos or braille and the child’s name can be printed on the front of the phone. There will, in due course, be the option to change the numbers on MyOwnFone’s website and when you do this you can buy a replacement cover, with updated name buttons, for a small charge.

The tariffs are also designed to be simple; you pay an amount for the phone itself, then either a straightforward pay-as-you-go with three top-up amount options, or a choice of three monthly contract amounts. 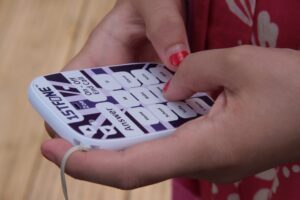 What did Mum think?

Not being ones to want to give our children free rein on the most up-to-date phones on the market, we’ve been in a dilema knowing that Zoe, our eldest, would soon need one from a safety point of view. However the phones her friends have – and that she would therefore set her sights on – are more advanced than we think are strictly necessary. We’re also not keen for her to have unlimited access (paid for by us!) to text and natter to her friends and would prefer her internet access to be on the family computer where it’s more easily monitored.

As Zoe had started to walk home from school with friends in Year 6, we were keen to try out the 1stFone. This gave some safety reassurance from both points of view, whilst also allowing her other emergency contacts and selected people she could confide in about things if she wanted to.

Zoe enjoyed putting her own design on the exterior of the phone and we were extremely impressed with the ease of the website, the speed of delivery and the customer service:-)

I’m really impressed with the phone, as has been every other mother who has seen it or I’ve talked to about it. The peace of mind of our child being able to contact us when walking home from school, etc. with friends or us being able to ring them is obviously what giving your child a phone is largely about. However, the idea that I think we’ve all liked most is the simplification and restrictions the 1stFone offers.

One friend, who is a secondary school teacher with pastoral care responsibilities (as well as a parent) and who therefore has another perspective on children with mobile phones, says that it’s definitely an option she would consider for her own children given the number of phone-related issues she sees in school.

Unfortunately though, I do think that Zoe will grow out of the 1stFone pretty quickly once she starts secondary school in September. It won’t conform to her peer group’s opinion as to what their phones should look like and, let’s face it, the other main reason for providing your child with a phone is for them to not stand out as being different – and to them this looks different.

Although Zoe enjoyed choosing her 1stFone design, maybe in hindsight it would have been good to have the option to make the base design look more like other phones (e.g. black casing), with a choice of ‘OwnFone’ or ‘1stFone’ branding, etc.

I’m personally not convinced that a child of 4 years (which is the youngest age MyOwnFone say the 1stFone is aimed at) actually needs a phone, but I can see that a simple button phone with Mummy and Daddy’s numbers on could, for example, be great for a child whose parents have separated, to allow the child to talk to either parent whenever they wanted to.

I also know of someone who is very interested in one for their child with Down’s Syndrome, as she desperately wants a phone like her friends, but wouldn’t be able to cope with a highly flexible one.

I can also see how the versions aimed for workforces and older people would be great – in fact I’m thinking about getting one for my Dad, who isn’t that elderly but is a complete phone-phobe, for emergency situations!

Another huge advantage of these simple phones is that the batteries last for AGES…..

My conclusion, as a parent, is that I think it’s a great idea for certain ages, but that our technology-savvy children will want something more whizzy than this by the time they get to secondary school. We will definitely consider getting one when daughters 2 & 3 are in Year 5 or 6 and starting to walk home from school.

Thank you for the opportunity to try and review it, it’s been great :-) 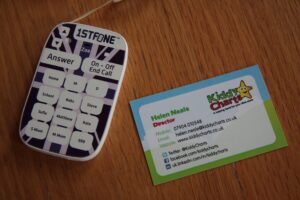 “I sort of enjoy having a 1stFone, but I am a bit embarrassed and feel a little disappointed that most of my friends have more advanced phones and I don’t. I’m used to it now and I see that trying to make it simpler is a really good idea.

When my Mum first said I was getting a phone I was really excited because I thought she meant a Blackberry or HTC or something like that, but when she showed me the website I felt kind of droopy because I thought it was going to be a bit babyish.

Although I would prefer to have a phone that you can send and receive text mesages and have internet access on , I think a 1stFone is much safer and less complicated.
I think when I go to secondary school in September I will soon get really embarrassed by it and desperately want a proper phone.

I would like the 1stFone better if it had a touch screen instead of buttons so that it looks like a proper phone and if it didn’t say ‘1stFone’ across the front.”

Mummy 10/10 for primary school age children, tailing off rapidly for secondary age! (but could still be good with a few aesthetic alterations ;-) ) 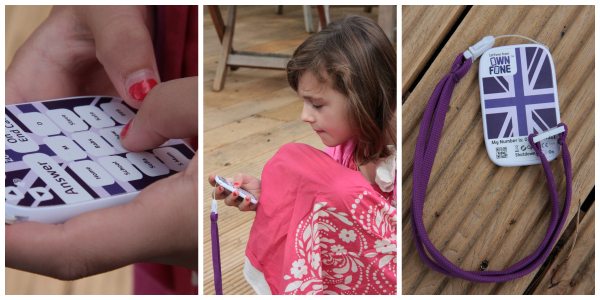