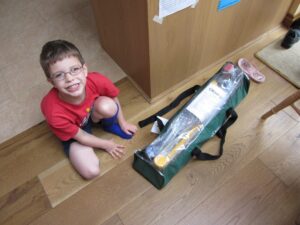 Croquet…sedate…relaxed…sophisticated. Not three words that spring to mind when I think of my kids. But….I have never played kids croquet with them, so we shall see, eh? This Lawn Croquet Set from Garden Games would make a good large reward as its a more expensive item. So perhaps something to save for a really, really special occasion. It’s one of a number of Croquet Sets that the company produces.

A good, sturdy, zip bag comes filled with painted mallets in red, yellow, blue and black. Naturally to go with these are the four balls of the same colours. There is also a winning post, six hoops and some instructions to help you lay the hoops out properly.

Easy, unless you read the instructions which are at best confusing, and at worst totally incomprehensible particularly to five and seven year olds…so we ditched them, and played our own game. I do imagine that older children would understand the rules better; but mine at 5 and 7 just needed the basics.

The instructions also mentioned “coloured clips” to go on the hoops so you know which hoop your ball should be aimed at next.

However, these were nowhere to be seen. And for once, Stuntboy hadn’t nicked them or I hadn’t moved them and forgotten where they were… we just didn’t have them *note to manufacturer*

After we got over this, and decided we would do our own thang, set-up was fast and furious. Particularly as it had rained, and so the hoops were dead easy to put in the ground.

Putting it away again was simple too; and we did the set out on two other occasions that day, so by the end of the first day of use… we had had LOTS of putting-away practise.

The game is listed as for 6 – 12 on the company website. That seems about right to me. My little boy is 5 though, he did get on very well with it. However, he is a VERY outdoor and sporty kid, so I suspect he is an exception rather than a rule. He usually is.

The size of the mallets were perfect from them both; and the colours engaging for them too. I suspect that hard use will cause the paint the chip, and it had started after a weekend of play. However, it wasn’t significant, and its likely to mean the set will look well loved, rather than shabby.

My daughter was keen at first, but then struggled a little with being able to hit her croquet balls in the right direction. She also wasn’t impressed when her dad hit her ball away. It’s a girl thing. That wasn’t enough to put her off though, and she was happy to come back for more.

And it is…when you combine it with hurdle racing over the croquet hoops when its not your go, yes…

It was great fun. A good quality addition to the arsenal for any family to get their kids playing outside. Its distinct advantage is that kids croquet doesn’t have to be played in stunning weather. We have played it in breaks in the clouds. In fact, the wetter the ground the easier to set up…a British weather godsend!

8/10 from the kids; mainly due to daughter related tantrums about being hit on the lawn

8/10 from me due to instruction confusion and the complicated nature of the game which requires some sticking power if you really want to get into the intricacies of it all. 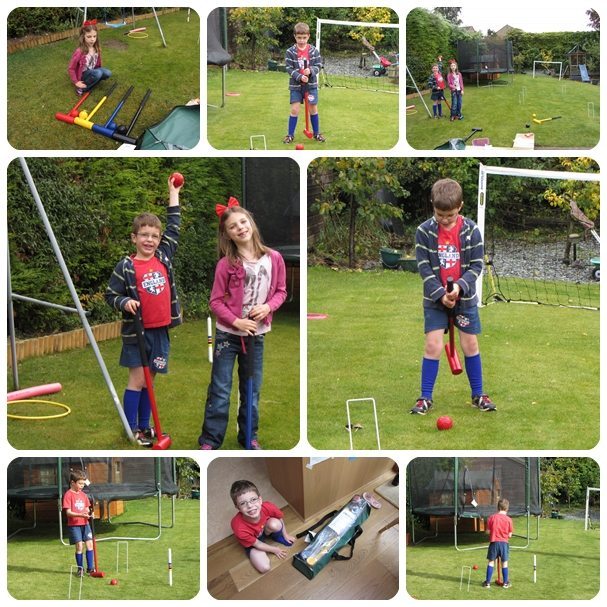 Lawn croquet: we ALL had a lot of fun you know!

Do your like kids croquet? Do you have any tips?

We were provided the mixer set for the purpose of review. All opinions are honest and fair, of course though.