Our final board game review for the Blogger Board Game Club this quarter is the rather gorgeous looking, if slightly complicated, Catan (previously know as Settlers of Catan).

Catan is a game played on the Island of….yep, you guessed it, Catan! The idea is to collect victory points, through your gameplay, to a total of ten. When you reach this score, you have won. 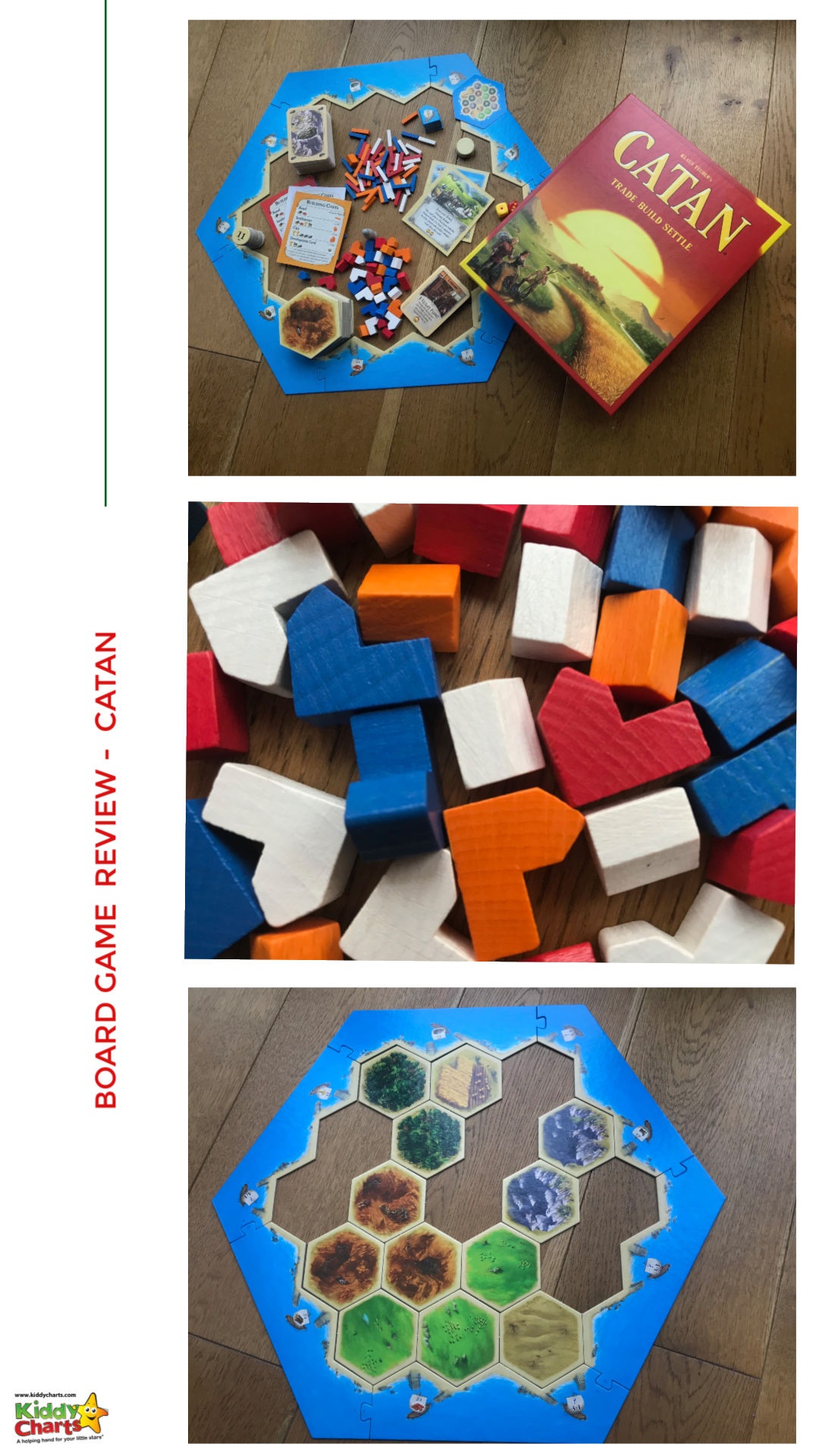 The way to collect the victory points is to build roads, settlements, and cities within the board. To build these, you need to collect the resources (wool, lumber, ore, brick and grain) from the island, and swap them for the relevant build. The building cards explain which resources you need to swap for which build.

In addition to the resources, there are development cards, which either give you more victory points or allow you to play two special cards; the Knights, or progress cards.

The board is built by fitting the sides of a Hexagon together; and the numbers on the ends must match. In addition to the board sides, there are 19 terrain hexes. For beginners, there is a suggested set up for the board and the hexes must be placed as shown, but for more experienced players, the hexes can be placed randomly in the board.

There are also numbered chits; and these are to be placed as described in the beginners set up, or randomly across the board clockwise.

We’ve already said that we feel Catan is complicated, and we don’t think anything illustrates this more than this picture. There are so many parts to the game, and an equally large amount of “stuff” to remember! 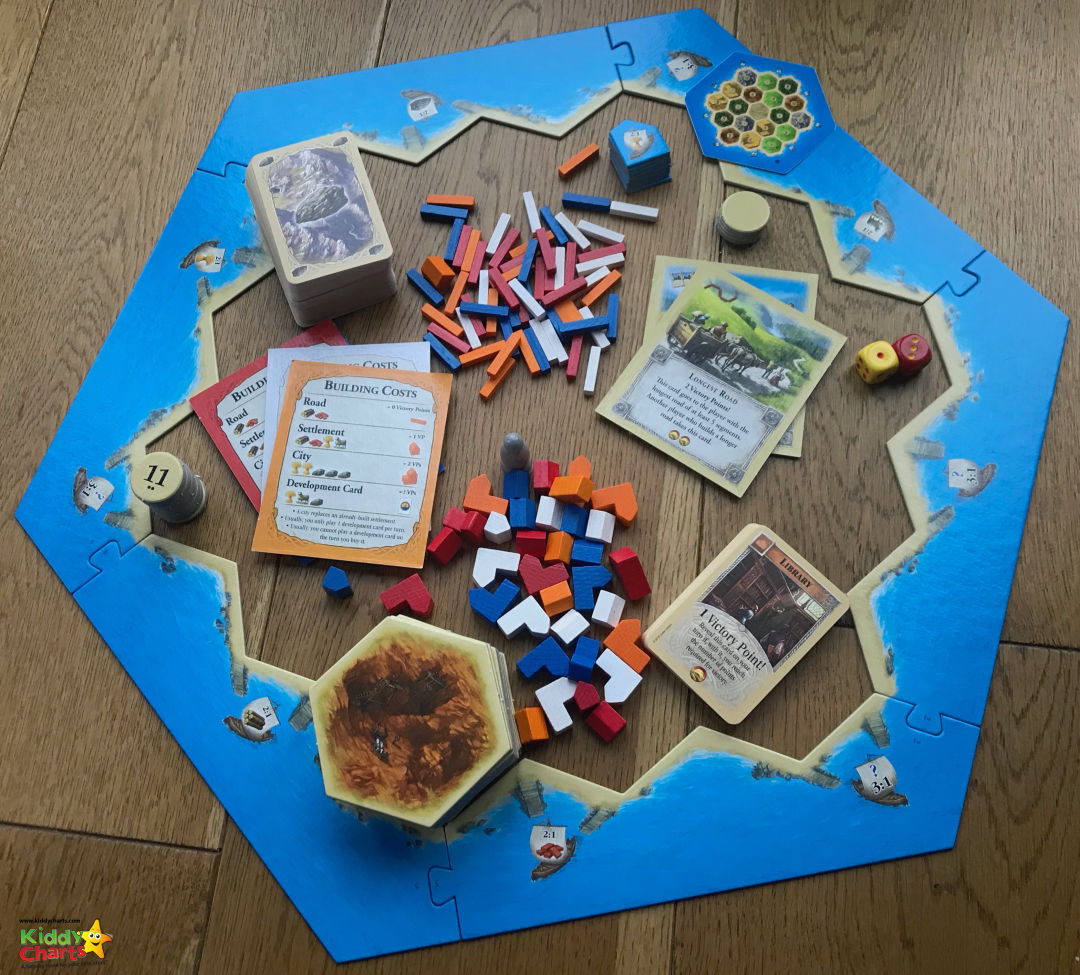 In every turn, a player may (in this order):

We don’t have quite enough space to list all the rules to Catan here, but do recommend taking a good look at them before, as well as watching a few videos on the gameplay. Make sure you are looking at the right version of Catan, as there are a few expansions, and different Catan games. The version we’d most like to have a bash at is the Catan Game of Thrones! Who wouldn’t want to explore, and build on Westeros?

How to Play CATAN!

As we are really about reviewing the game, we will leave the rules there. However, do take time to read the game overview, so you understand the background of the game, and be prepared to play a few times with the beginners set up so you get used to the game, and the different things you can do in your turn.

What did we think of Catan?

This game is listed as being suitable for ten plus. And we strongly second this. Potentially, depending on the child, eleven might even be a better estimate….. 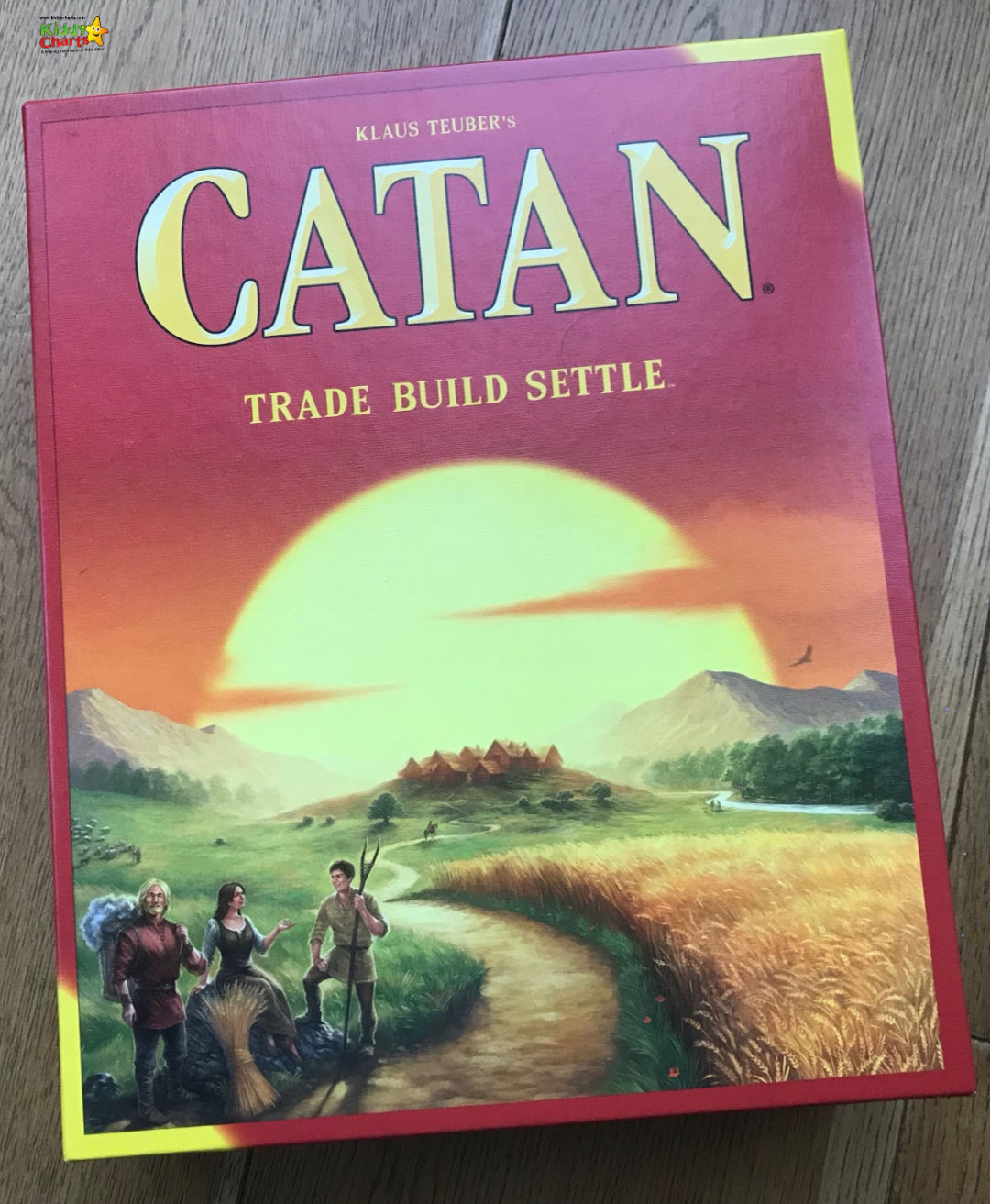 This view could be because my brain struggled to cope with the rules myself, and younger brains may be a lot better. Who know? 🤣 There is a lot going on for each turn, and a good deal to take in; from working out what resources can build you what, to deciding where to build and expand/connect your settlements.

Trading with the other players is a vital part of the gameplay, and it’s important to discuss/negotiate well, particularly bearing in mind that your settlements may not generate resources of every type. To build takes resources of all types, but if you aren’t settled next to the relevant terrains; you won’t be getting the right resources. This means that you HAVE to trade with your fellow players. If you don’t trade, you just won’t be able to build the cities, and settlements you need to gather those ten victory points. 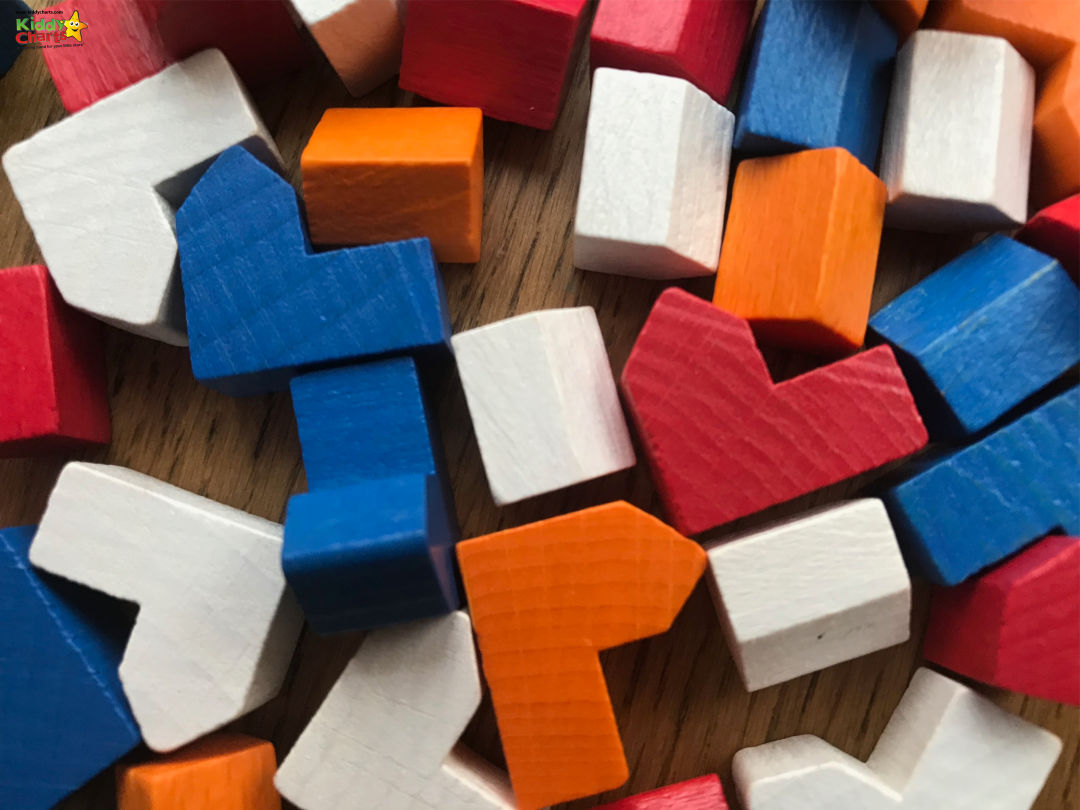 The game requires patience to learn, but once kids (and you 🤣) have the hang of it, that patience is rewarded. After you move beyond the beginner set up, the game is refreshing. It becomes very different every single time it is played. Terrain hexes are in alternative places, as are the resource generating chits. Games can be longer here, as there is less structure to the board. More random placement, means it can be harder to generate the resources you need. Trading becomes even more of a must!

Though the game play is complicated, it is thoughtful, encouraging problem solving; building really vital skills for your family. Most importantly though, it IS fun; once you get past the complicated nature of the initial learnings! We were incredibly grateful for the cards which show you the resources required for the different builds, as well as the beginner set ups. It really, really helped to learn the game, to make it that little bit less complicated at the start. 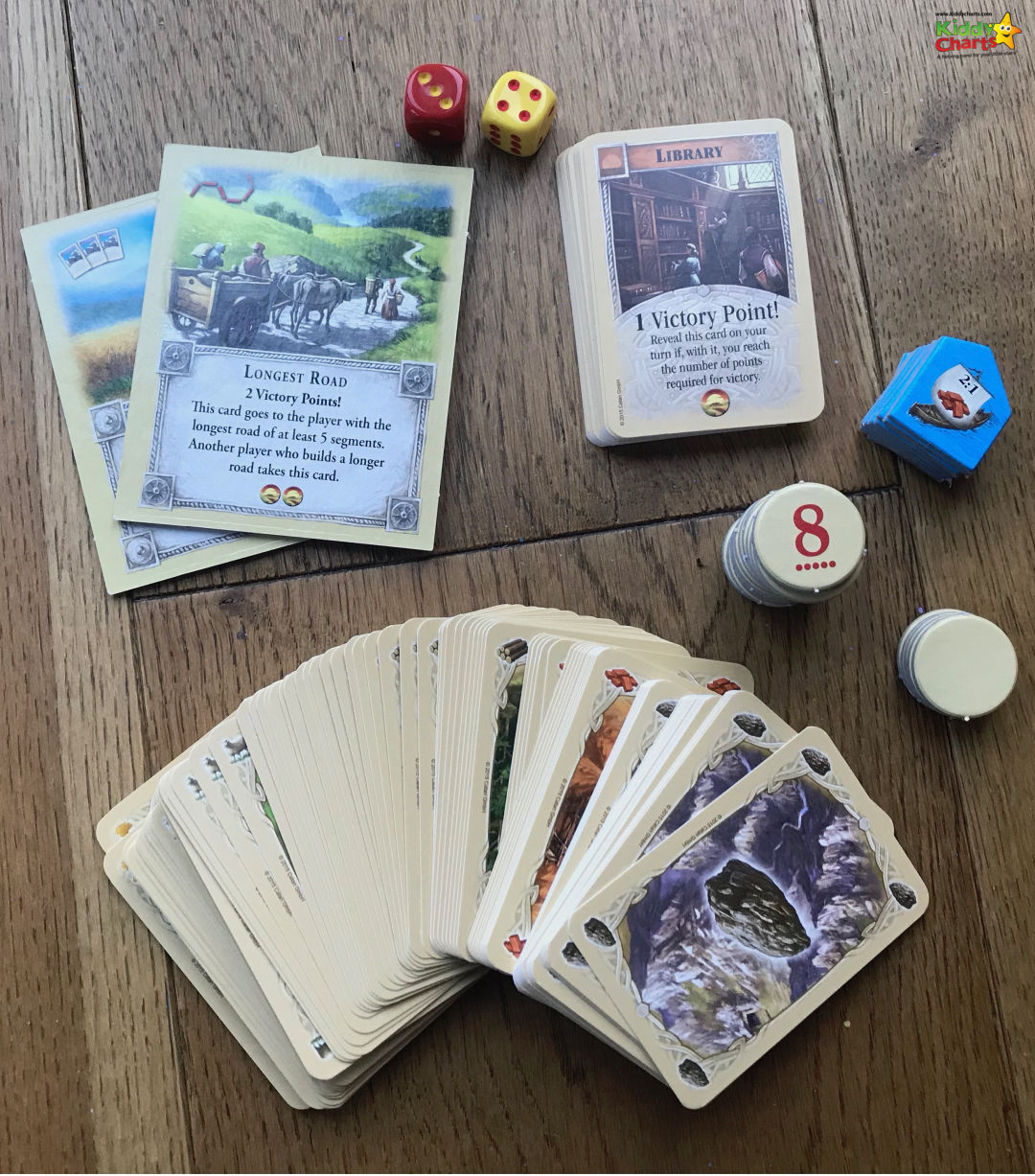 The game itself is beautifully presented, which does help you to have the patience to learn it.

Trading can cause arguments with siblings (or is that just our two?!?), so it can be worth keeping a weather eye on the kids. Just in case…

But overall, a good family game that has stood the test of time. We can’t wait to check out some of the alternative versions, and extensions beyond the four player game.

The main reason for our lower score is that it is for 3-4 players only, and requires a Catan extension for 5-6 players to play. This means the cost adds up a little when you have already paid c. £36 for the initial game. Paying an extra £20 if you have a larger family, or like getting a board game out for family events, is a big ask. Yes, the game looks great, but this is a bit of a downside for us.

We hope you liked this Catan board game review, we do have a few board game reviews on the KiddyCharts site. Why not check out the others and see if there is something that you would like to buy for friends, or just a bit of family fun.

We’d love to see you on the site again, so do subscribe to our weekly newsletter too

Thanks so much for joining us. Hope you enjoy your board games as much as we do!

New idea for fun outdoor and indoor games. Thanks for sharing!

Katan game looks so fun! We love playing new games with my family!

My brother is obsessed with this game, and asked for the extension for Christmas last year! He has a great time playing with his group of friends here, and now I understand a little bit more why it can be such a fun game. I didn't know there were alternative versions, I'll have to look into that!

I've never heard of Catan. It sounds like an exciting game to play with friends and loved ones.