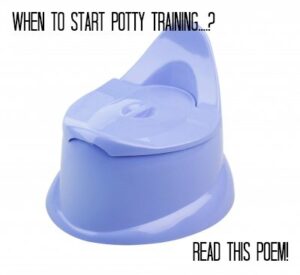 When to start potty training: Give them a bit of time and when they are ready it’ll be easier…honest!

The other day I was lying in bed, thinking about stuff, and what on earth I should do for a blog post after the holiday period…and then inspiration struck…a poem, that’s a new and interesting way to start the year…but a poem on what?

Never let it be said I don’t push the envelope…even if its an envelope that smells slightly of wee, and that other thing mentioned below every now and then…

Give them time, by Helen Neale; mum of two and usually not known for having patience with kids….

When my mum was young it was common too
Pop kids on the potty after meals to poo
It often meant that children could use
The toilet early for doing number twos.

But was this trained or more like timed?
As they were being lifted and so were primed
To use the loo by mum and dad,
Rather than knowing the feeling that they had?

You see, by the time my kids had learnt to wee,
They were both pretty much turned three,
They loved their wonderful grown up knickers,
The praise, the reward charts, and even the stickers.

I know it’s hard, but it’s worth the wait,
Try not to be pressured by that well-meaning mate,
It’s really tough, don’t we all hate the nappy
But soggy clothes and soiled sofas won’t make us happy

So leave it until its their choice to do it
Otherwise I guarantee you’ll roo it
Give them time, its not really a race,
It’s so much better done at their own pace.

Patience, as we know, is a distinct virtue,
And it’s a dam sight better than being covered in poo!

What do you think? Is there a potty laureate in me bursting to get out? Probably not… but do let me know below! And more importantly, what advice do you have about when to start potty training; early or leave it until they decide?

Thank you for this poem. My little boy is 2 next month and started becoming aware of a number 2 in his nappy and may tell you "poo" He may also mean Winnie The :) I will be taking my time with my little boy and order one of your charts when he's ready to start :)

Thanks so much for your comment - and I am sure you will know when he is ready. Will love having you back when it is time :-D

Brilliant poem Helen.Mine were all different in the way I trained them but time, patience and praise were the key things.

Thanks, Aly - patience is sooooo important in all things parent, eh!!?

I was looking for some wisdom on potty training, and there I have it! Not quite sure how sane you are, as poos and wees don't generally inspire poetry in me! But the general sentiments I do share with you!

Sane me - never - gibber gibber ;-) I love writing poetry actually, and am wondering whether I should do more for the blog, its findin the time that's the problem. As for whether waiting works, it did with mine, and with other friend's too! :-) Good luck.

i LOVE the poem. My little boy was potty trained at 2 and 3 months,,,he was pretty easy all in all, although he did save his poo's up for naptime when he had a nappy on for a long time. Little girl number 1 was a different story we potty trained her a bit later and even at 4 she is quite unreliable..i often hear a panicked should of 'MUMMY' when she leaves it too late. Little girl number 2, I am sure is ready. She make us change her nappy as soon as she does anything in it, but so far has refused to used the potty or toilet. I think I just need to go for it...wish me luck. x

How talented are you! Love that you managed to write a poem and the message of taking your time could be applied to many, many other milestones :)