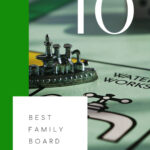 We LOVE a board game on KiddyCharts – you might have noticed this from the content that we have covered on the topic over recent years. We have a load of board game reviews on the site to prove our love in fact! But what are our favourite board games, and what do other families love playing? We have put together a little top ten best board games for family fun, so that you and yours will NEVER BE BORED AGAIN.

We hope…! And we are doing it in reverse order because – well, we are contrary like that.

Note: These board games for family fun are really suitable for slightly older kids, ranging from around six (Exploding Kittens), to older kids of ten (Splendour and Catan). So do bare this in mind when you take a look at them.

We found this a little complicated when we first started playing it, but it’s a great game once you get into it. So many interesting ideas for older kids; that will get the whole family thinking about tactics. Mummy from the Heart has written a great review, as has Slouching towards Thatcham as well as there being a Catan review on our site too.

The basic idea is to build a civilisation with the resources available in the game before your opponents do. Specific resources allow you to build different things, from roads, to cities. But be careful, as your opponents, or the robber that lurks on the board, can easily thwart your plans!

This isn’t a game we have played, but there is definitely a lot of votes for it amongst other parents, including Sorry about the Mess, and MummyTravels.

The idea is a bit like Russian Roulette, but, wait for it, with kittens! Players take it in tern to draw cards, until someone draws the exploding kitten; and they loose. Simple, but effective!

A favourite for many, including Tim from Slouching towards Thatcham, this is a word game with tiles that looks to be a little bit like Scrabble, only different…. The basic idea is to arrange your tiles into a grid faster than your opponent can manage it. But of course, it is rarely THAT simple.

And yes – we know it isn’t STRICTLY a board game as you are building the board with the tiles, but its good enough for us.

As with many of the best games, the premise in Codenames is really simple, and perhaps that’s why is so much fun. It is easy to work out, so you can get started fast. Mama Geek has done a great review of Codenames for you.

The idea in the game is that everyone is a spy, and you have to work out each team’s identities before the other side can decipher theirs. Simples.

We have put TWO code games next to each other because we like it like that. Codename is based on words, but Da Vinci code is based on numbers.

Everyone has a set of tiles that they select from the collection of black and white tiles available to all players. Each player then takes it in turn to guess a tile, with the ultimate aim of cracking the code.

This IS an old game, but we LOVE it; so we are including it nonetheless. Sometimes it is the oldest games tat bring back the most fond memories…speaking of which…

If I had my way, this would probably be number one, but my kids rule the roost so…. it is here instead. I have loved Game of Life every since I was a kid, but my parents NEVER bought it for me. No clue way.

In a fit of rebellion, it was the first game I bought as an adult after I got my first job, and I have loved it every since.

Yorkshire Wonders view of the game is:

I remember playing Game of Life with my brother when I was a child. It was very American then and I learned lots of American expressions as well as occupations I had never heard of. The children play and enjoy the updated version now. The idea behind the game is that you progress through ‘life’ from being a teenager right through to retirement. You have to choose initially whether to go down the ‘straight to work’ or the ‘college education’ path. The idea being that you start earning sooner by going straight to work but can earn more in the long run (but later on) if you go down the college route. You then meet obstacles along the way, such as mortgages, babies, debt and illness. It might sound a bit drastic, but is great fun really!

It is such a fabulous idea, and so largely rules by the spin of the wheel that determines how far you move, it is a great leveller!

Playing with my kids is wonderful too. Not least because we have come so far with same sex marriage that sometimes they will alternate with deciding whether they will marry a man or women. Something that sadly I wouldn’t have thought of as a child, but am very glad my kids accept now as the norm.

For some, I know this is probably not in their top ten, but it is a game that has stood the test of time, and is STILL wowing kids generation after generation. It is perfect in travel form, and has been reproduced countless times. Penny Plays has a lovely review of it, and it is such a traditional game; we BET you know how to play it.

In case you don’t though, the idea is that you have four pieces, and have to travel around the board to get those pieces “home” without being thrown off the board by your opponents.

Our kids have loved the game since five or six, so its a great one for them as they start to learn about all the fun you can have with a board game.

THIS is old. So old in fact that Tutankhamun was playing it. Probably.

The Royal Game of Ur is a two player game, highly strategic and, supposedly, was first played in Mesopotamia in Ancient Eygpt. It was first played by me when I was about 8 though, and we kept the game, and our kids now play it. Avidly.

We’ve said that Ludohas stood the test of time, but nothing compared to The Royal Game of Ur.

If you can find it. Snap it up. If you can’t – sorry – though you might want the special edition available from the British Museum. It IS £99.00 though, so you might be better getting a slightly cheaper version from Amazon! 😂

The idea of the game is similar to Ludo; you chase your opponents home; and can throw them off the board. Moves are determine by dice with gold spots and blank spaces; combinations are equivalent to different moves. The game board squares mean different actions can be carried out when yo land on them too. So it isn’t as basic as it sounds.

We adore it; and you WILL be surprised at how strategic such a simple concept can become.

My kids “might” put this number one on some days to be honest; it was a close run thing! If you want the full low down on the game, check out our Splendor Review. The idea of the game is to accumulate gems to enable you to grow your wealth and resources. The first to 15 gems win the game. There is an awful lot more to the game than just this though; the game is for older kids, and helps them to develop their own tactics, and strategies.

Our daughter seems to be the “Queen” when it comes to this game; we don’t think we have beaten her once!

We LOVE this game; collect train cards in specific colours in order to build tracks between cities on the board. There are various different Ticket to Ride games; we have both a European and an American version. There are other ones too, including a UK expansion. It is both educational and fun. The game can also be played without too many arguments between the kids, which is a MAJOR bonus. We do have a Ticket to Ride review on the site as well, so go take a look and see if the game is for you.

Even though this game didn’t make the top ten; there has to be a mention for the Monopoly game. We love the new versions of it; Monopoly Gamer and Monopoly Mario Kart. Hasbro have done a wonderful job of keeping the game up to date, but the original, in our view, is STILL the best. The Junior Monopoly provides a wonderful introduction to younger kids, and the classic game of property empire building, is timeless.

There is even a Game of Thrones Monopoly version….. *rushes off to buy it so she can ride Dragons!*

The ONLY problem we have with it, is the arguments that is can cause between the children. That’s why it hasn’t quite made our top ten. It HAS to be worth buying and having in anyone’s collection though.

Clearly you might disagree with some of our Top 10 best board games for family fun. If YOU have a family board game you think we should have included that we have missed off, do let us know.

We are now wondering if we need to create a separate list for vintage games, as somehow we didn’t manage to fit Cluedo in here. That’d have to make a VINTAGE games top ten wouldn’t it? Or would it?!?

We very much hope that you like this post on best board games for family fun and it gives you some great ideas for good games to buy for the kids.

If you like our Top 10 best board games for family fun – why not sign up to our newsletter for more advice, printables and general fun-ness on the parenting blog?

Thanks as always for taking the time to stop by and see us.

APart from Monopoly, the rest of these are new to me. Will check them out :) Thanks for sharing!

Catan is absolutely my number one. Even when it is not your turn you still interact with the player whose turn it is. With Ticket to ride I miss that. Game of Life always has been my second favorite game though the old version not the new one with the electronic device.

We play 3 out of 10. We seriously need to level up our board games.

I love the list you shared. My family's faves are Ludo and monopoly.

These all seem so fun to play. Kids will really love these.. Adults like me as well. 😂