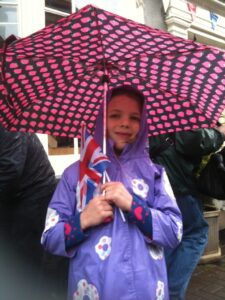 Waiting for the Olympic Torch relay

We saw the torch on Saturday this week; it was soggy beyond belief, the English weather surpassed itself.

The torch was carried up our high street; almost swum up it by some extremely well deserving people. Who didn’t mind at rain a jot.

All a bit different for Stuntboy though…

Fearless at the sight of a hill on his bike, not scared at all by jumping head first into the deep end at a swimming pool, but as soon as he felt a drop of rain as we waited for the torch, the world was about to end now, and we hate water so much we have to cry rather loudly next to this lovely lady who isn’t too keen on having a small person scream in her ear…

So we retreated into a pub, and I spent the next hour persuading him gently that a bit of rain, and cold, was worth seeing the Olympic torch relay for. Unfortunately, as he is five, the concept that this is a once in a lifetime opportunity was a bit lost on him. He was rather more concerned with whether or not his ears were cold. Even fruit shoots weren’t helping.

I did try everything….from appealing to his better side with:

“But mummy would really like to see it even though you might get a bit wet for five minutes.”

to trying the old chestnut of…

“All your friends will have seen it, and won’t it be sad if you don’t get to.”

Nothing was working, and I was beginning to wonder if I was actually going to have to miss the torch because my five year old is as stubborn as I am…

And then, glory be, Brad phoned and told me the rain had stopped and he could see the torch!

We legged it out of the pub and I lifted Stuntboy on to my shoulders. He could see everything, and I couldn’t see I thing. But it didn’t matter, at least I would see something now, even if it was just when the torch went straight past me.

Then I heard from somewhere just above my left ear:

“You can’t need a wee now, please. We’ve been in the pub for an hour, why do you now say you need a wee. If we go back in there, we’re going to miss the torch love; can’t you hold it in, please love just for five minutes?”

There was a ripple of laughter from the crowd all around me, but thankfully, Stuntboy was a littlestar and said,

And that was all we needed, within 30 seconds; there was the torch in front of us and him, and I think he forgot all about needing that wee! 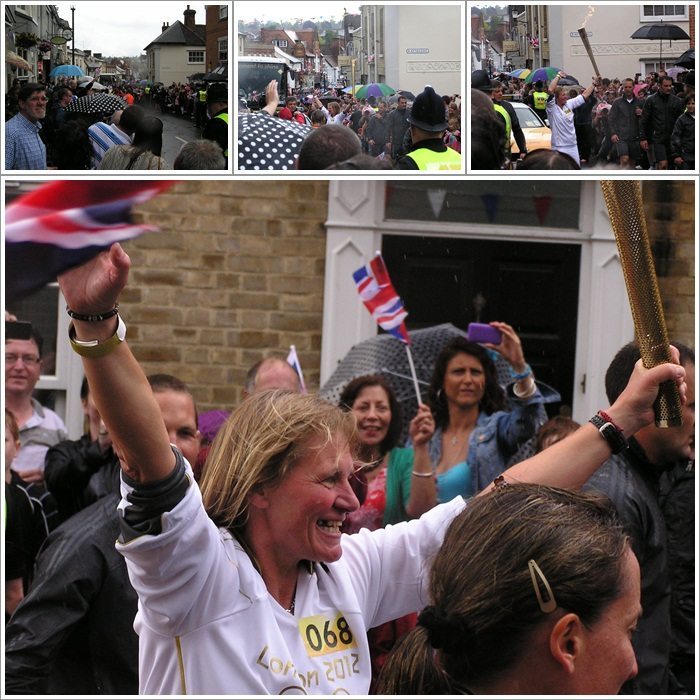 Olympic torch relay in Saffron Walden in 2012 in the rain

Have you seen the olympic torch relay? How was it for you? Did you get rained on too!  Let us know below.