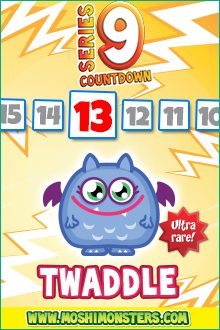 We are now into day five of our magic Moshi Moshling countdown and we have a load of rubbish, oops I mean Twaddle for you today! After the noisy Toots from yesterday, we are being introduced to a rather cute little fella; the rather bat like – Twaddle.

However, he isn’t a bat at all, despite his appearances, he is, in fact, a Waddling Floffle; whatever that actually is. They are sap-obsessed little critters, and are willing to do anything for a sip of the sumputious nectar from the inside of any enchanted beanstalk that happens to have grown in Moshi Land. Only enchanted sap packs enough oomph to be able to get them to fly; what with having little wings and rather podgy bodies *know the feeling.*

I may have already said that she is a bit of a fan of enchanted sap; but she is also rather partial to barbecued ladybird’s wing. And who isn’t eh?

She isn’t a fan of the inflated prices at the Gross-ery store; particularly the biscuits. Greenfly are a problem too; they effect the beanstalks

We will have more Moshi Twaddle tomorrow for you, so do stick aroun, or if not, then subscribe to our list so that you get the real deal on the little fellas :-D