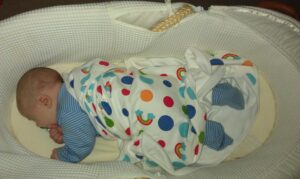 Silent reflux: Finally they heard Clare, and look what happened…

Our guest blogger today is Clare Nicholas, fully qualified Nanny of 13 years, now living and loving life as a SAHM to Emmy and Harry. Blogging over at www.emmysmummy.com for her own sanity. She is giving us an insight into silent reflux, which recently her little boy Harry was diagnosed with. You can see by the picture what a massive difference the diagnosis has made to the little man….

Emmy was such an easy baby – I guess we were lucky and when they say 2 babies are never the same they are so right.

Harry rocked into our world’s on 19th October 2012, he came in screaming and not much has changed since.

At 3 weeks old he developed oral thrush due to his constant need to feed.  After the 2nd course of treatment for us both things became apparent that something wasn’t right still and his comfort sucking was for a reason and my baby’s cries were cries of pain and not tiredness or hunger.

I took him back to the doctors who said nothing was wrong and to continue with the thrush treatment, once finished he would be happy again.

He then developed Bronchialitis so this masked the symptoms of anything else for 2 weeks while he was really poorly and in hospital twice on Oxygen and Nebulisers.

Once recovered, I still had a very unsettled, unhappy baby….The weeks past along with the sleepless nights spent pacing the room relentlessly, if I stopped moving, rocking the screaming started again.  I could not put my baby down at all – he needed to be upright and held all day and night.

Laying him on his back produced the worst blood curdling screams of pain which stopped everyone in their tracks, we discovered we could get him to sleep for an hour at a time on his tummy so we let him, equipped with a movement monitor we could get an hours nap in the day before it all started again.  He wouldn’t sleep unless firmly held by me so spent the first 11 weeks sleeping on my chest at night or firmly cuddled into me, he was restless after feeds screaming even in his sleep – thrashing around unless firmly cuddled into my chest and was only happy when being breast-fed.

At 11 weeks I broke too – no sleep and a poorly child for so long has that effect, everyone was surprised I lasted that long but I had to.

Another trip to the doctors, and again told it was normal behaviour for a baby to cry.

Something was wrong with my precious baby and yet no-one wanted to help me or him.

I researched what I knew of Reflux (being a Nanny for 14 years I was sure this was the problem or part of the problem), we could tick off some of the symptoms:

What he didn’t have was poor weight gain or being sick (sickness was present however it was only a little).

I turned to my Health Visitor this week for help and she listened, I talked, Harry screamed and I cried however she listened! and she agreed it sounds like reflux – silent reflux!

Armed with a video of Harry sleeping and screaming and the notes from the Health visitors I returned to the doctors today and have come away with Infant Gaviscon to try for 2 weeks.

I know it’s not going to be an over night cure and we may need to try different medications before we get it right but it’s a start on the right track, and Mummy did know best.

Trust your instincts, if you feel something isn’t right fight it, don’t give up and keep going back if you need to – babies shouldn’t have to suffer like this.

Do you think that silent reflux may be the cause of your little one’s cries? If so, do visit your GP and stick to your guns just like Clare did, and let us know how it goes.