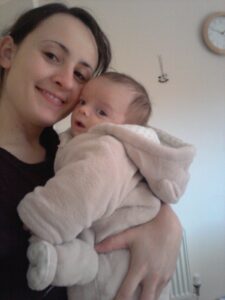 Victoria Wilkinson is a mum of three children under the age of 4 years. Previously a Nursery Nurse, but since having her children loves being a stay at home mum. Her blog is Love Being a Mummy. Today she writes for us about reflux in infants, and how her instinct about her little boy was right…

Since Joseph was born I knew that something just wasn’t right.

Joseph is my third child, so it just proves that each baby is different and it takes time to realise what is normal for your baby and what is not.

Joseph was breastfed and fed constantly which I assumed was cluster feeding. It turned out he also had a 100% tongue tie.

After the painful feeds, using nipple shields and topping up with formula I thought, due to the fact I was using the shields before the tie was cut, that my supply was not enough for him so I switched to formula.

Nothing changed, in fact he became worse, as he would cry almost all day until 2 am and sleep 6 hours straight, this was the only sleep he had unless he was in the car seat…

Myself and his Daddy were at our wits end:

My friend was my lifesaver.

After I told her how hard my baby was being she immediately said he had reflux. 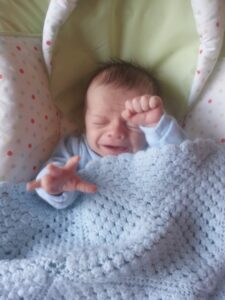 It’s just wind he will grow out of it’

Unfortunately, thanks to this attitude, we suffered and had to stop his milk early.

Getting the doctors to listen was the next struggle.

I knew my baby had reflux but it was dismissed at my GP’s.

However I said to family and friends.

“I will return to the doctors every single day until he is given more than Gaviscon.”

After seeing a doctor who said: Is he being sick? ‘No’ and Is he putting on weight?’Yes’ Her respond was

“He hasn’t got reflux and we cannot hand out prescriptions for nothing as we have budgets the think about’.

I then returned to another doctor and instead of saying ‘ I think Joseph has reflux’ I said ‘ Joseph has reflux and we need medicine for him’ His first reply was ‘ I can give you gaviscon’ I said this has not worked for us and he did say that was the only thing. I knew otherwise and said I know you can prescribe Ranitadine. He then said only the paediatrician can prescribe this, but rang up and they said yes straight away. I was not going to wait at least 6 weeks for my referral, no person should be left in pain that long, let alone a helpless baby.

A month on Joseph is much better, not a completely changed baby but happy 90% of the time.

We have a referral in a few weeks, and I am guessing his Ranitadine will be increased due to his gaining weight.

Joseph is also having anti reflux milk called Enfamil AR and both Ranitadine and the milk work well together. He is sleeping in his moses basket in the day, lots of smiles, giggling at his sister and brother, it is just lovely….

If you feel something is not right with your baby, if they do not settle or are overly windy please speak to your health visitor and GP. There are lots of different symptoms of reflux. I would also ask for a referral as they do know more and have a clearer understanding of reflux at the hospital. Keep pushing and do not give up, because as the end of the day your baby and you are the ones who are suffering.

Do check out our other posts on reflux in infants in our series on the blog; there is a linky at the bottom of the first post in the series.

Infant reflux: Joseph is a much happier baby now…