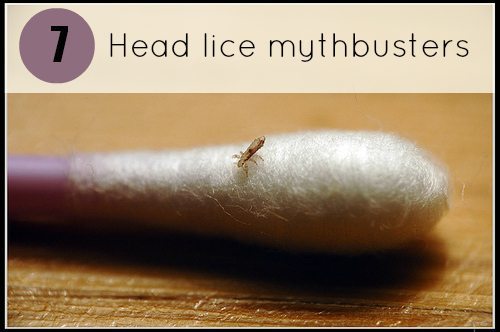 I know its a Wednesday morning, and who wants to hear about head lice,and more importantly – again…as we wrote about how to keep nits and head lice away last week. As I said then though, they are a fact of life for the parents of young ones, so how about some myths about them to make sure you know your head lice instead of cowering in the corner at the mention of them ;-)…

They can swim – Michael Phelps eat your heart out

No they can’t – they can survive in water though, so don’t lie back and relax in the bath with your head on the back of the bath after you did your de-nitting and head lice duties…not a good plan.

They can jump – Greg Rutherford too!

Wrong again – they crawl from one head to the other..they aren’t fleas and won’t be setting any world records for this or winning Greg-like gold medals either. Head lice transfer between heads with direct contact, even for just a momen. They might not fancy moving though, but then again they might! Apparently, as we said last week, using Tea Tree Oil in your shampoo can put them off a wee bit ;-).

The nits are the eggs, and the actual animals are the head lice or head louse.

Nits won’t go anywhere once they are laid on the hair root of course, but what’s the lifecycle of a louse? Eggs are hatched about 7 to ten days after laid. If you have a nymph (young adult) on your head, it’ll be mature after 14 days, and then can lay eggs again…and so on. Lice die after 30 days.

They make you itch

Head lice just like hair – doesn’t matter what condition its in; in fact, they actually prefer clean hair as its easier to move through it. They are also meant to be averse to some smells, such as Tree Tree Oil, but they won’t visit you just because you have hair that makes you look like Worzel Gummage. Alternatively, having clean hair won’t make them stay away either.

Head lice are happy on any hot head – that’s what they want – somewhere to lay their eggs. However, they can be more common in girls than boys because they get more opprtunity to move from one head to another as girls hair is often a bit longer. Perhaps wee girlie’s are more prone to hugging their friends randomly as well. Boys are too busy maiming them with make-shift swords *stereotyping*

You can do yes; but not easily, and not unless they are fully grown. If there are a lot of head lice, then that clearly helps too. However, you haven’t got a hope if there are just a few of them. Nits are a lot harder to spot, and really only if they are on a white background. Nits are laid right next to the root so that they get the heat that they need to survive, making it almost impossible to see them. Get that Nitty Gritty out thought, and you’ll be able to find a few.

Do you have any others that you have heard and can debunk? Let us know below. There is more information on head lice here too, in case you are interested *why*.

I find a flat iron kills the nits nicely although tough to get super close to the scalp day one anyway. Maybe good to re iron 5 days later before they hatch?

I heard black people don't get infected with head lice because it's course and oily?

The american louse has claws to attach to the hair that favor a round hair shaft. African American hair tends to have a more oval shaft. Therefore, African Americans can get head lice, but the louse has a harder time holding on be able to feed and reproduce.

This is a myth too sadly... my 4 year old niece is just getting over lice and she's black. She constantly has product in her hair and it's almost always tight to her head and she still got them.

Sorry *their hair is course and oily*

Here is Jenny's post too - well worth a look! The Brick Castle: Head Lice for the uninitiated. http://j.mp/16RkNg8

I have to disagree with the last point - and I've photo's on my blog to prove it. I think in essence the paragraph is right, but the 'myth' is a truth - you can see them on your child's head with the naked eye - and sadly it only gets easier the more practice you get! :D

Thanks for the comment, my dear. I think I probably should have been a bit clearer with the last point. I agree you can see them with the naked eye, but usually only when there are a fair few of them, so probably better to catch them before you are drawn to looking because of what you saw moving....if you see what I mean. Though it is, of course, not always easy to spot them before this has already happened. My daughter has very long hair, and lots of it, and if there are only a few, you can't see them without looking very hard, lots, and you are right, you most definitely can, easily. ;-) The more practise you get, the better you get at it all as you say. Nits on the other hand, very, very hard to see even if there are a lot of them as they are so close to the scalp....