Eugene the square pear from yesterday was a somewhat slow fruit, contrast that to the new, ulta rare Moshi that loves to hang about at the movies, Blinki 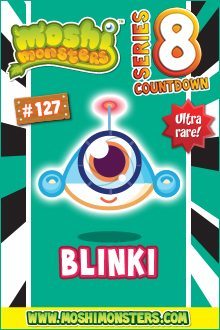 Adding to the already crowded movie theme that was started by Marty, and Jackson; Blinki is rather a cool wee fella that has a rather super Microscopic eye, jets on his side to make him even nippier than you think, and a clever transmitter atop his bonce.

Blinki is designed to capture anything for the movies, and Roary Scrawl uses his lightening fast reflexes and Moshi-cam to great effect in his Moshi movie making empire.

Because the little guy is beyond clever, he is even able to play you back anything he records with a holographic projector that he just happens to have in his back pocket. Well, sort of.

I think that Chatterbox agrees that his enormous eye is rather cool….

What do you think of Blinki, the latest edition to the Moshis Series 8 fold? Another movie moshling – will we get some more in the series, or have we seen the last of Moshi movie making for now? Let us know what you think of this rather funky looking robot.