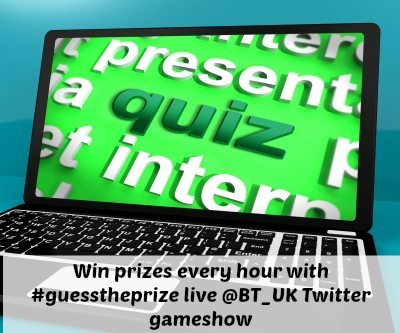 To celebrate the launch of the BT Big Broadband Sale that gives you BT Infinity for only £7.50: BT are going to be offering you something a little bit special on Twitter….the world’s first live Twitter game show.

What is the BT Big Broadband Twitter Live Gameshow?

Starting at 12pm on January 10th; the company will be giving away prizes within a live gameshow round that lasts 7 minutes 50 seconds. The gameshow will be streamed live lstraight to the BT UK Twitter channel. Participants will have to spot the prize on the gameshow that is worth £7.50 and tweet in their answer for a chance to win the entire prize bundle. Prizes will include:

The gameshow is scheduled on the hour every hour from 12pm until 4.00pm.

But wait….following the last gameshow at 4.00pm; at approximately 4.08pm there will be an extended prize draw for those that didn’t manage to win during the day.

This prize draw will feature an image showcasing another uber bundle of prizes to be won. This draw will be live until 9pm when the competition closes. A winner will be chosen at random after this time.

How do I enter?

It couldn’t be simpler. All you need to do is:

My daughter could do it, and probably would if it was for the XBox….

So to recap; all you need to do for each draw is use the hashtag #GuessThePrize, say which item is worth £7.50 and then @ mention @BT_UK.

Good Luck one and all! I shall be keeping an eye on things as well :-D