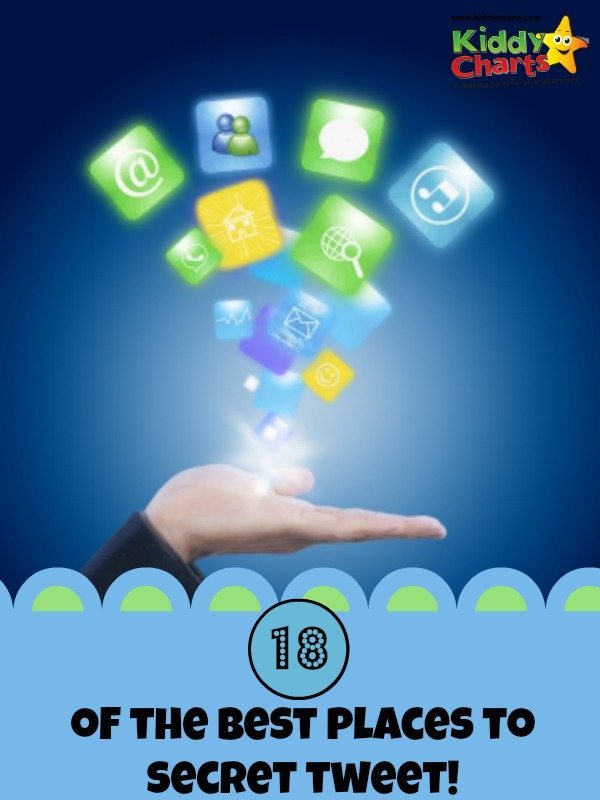 I started using Twitter in earnest exactly a year ago today. Do I say Happy Tweetiversary? Probably as there seem to be lots of rather strange words in the English language involving the wee bird…Tweeps, Tweeple, Tweet-Up, Dweeting (drunken tweeting), the list goes on…

Using Twitter has been an interesting journey for me; I posted on Valentine’s Day about my love for the bird and our relationship continues to throw up some surprises.

So, in celebration of our first anniversary, and with some help from my fellow working parents on there…have any of you tweeted:

1. Under the duvet; sorry this was me, I wanted some peace and quiet and it was 6.30am, so I thought I could hide there. I should have realised my error. I was wrong my phone and my Tweet got jumped on by the mysterious little people that live in my house

2. At the fast food restaurant; thanks to Tracey Clayton of Photo Organising company, Bless Ewe Creations, for this one:

@KiddyCharts well im in kfc at the mo!

Careful of the grease all over the screen; but perhaps if you mention the outlet they might give you a free meal?

3. At the school gate; don’t let the kids catch you or take the phone, you certainly don’t want to be telling your clients they “smell of poo”

4. In the bath; don’t drop the phone in, confuse it for the sponge – and thinking of strange words for Twitter users, is this actually called Bathweeping?…too much?

5. In the shower; same problem as above really, though the phone has further to fall I suspect, and therefore we get double the disaster, its wet AND its probably smashed into a million pieces, some of which went down the plug hole

6. In the loo; regular blog readers will know that my life is spent in the loo for some reason or another, so why not tweet there too?. Thankfully, I am not the only one, Chelle McCann from Social Media Sparkles tweets in the loo too…not the same one as me, of course..

7. While cooking; this is actually my personal favourite because it gives the impression that I am superwoman as I am working, and looking after the family all at the same time. Sod the fact that I may very well have got Bolognese sauce in the inner workings of my phone

8. While exercising; I have never done this, as I don’t have time to exercise as I am trying to take over the world as an all powerful business mum. I do suspect that there may be sweaty Tweets all over the Twitterverse

9. In your dreams; I did dream about tweeting once, but then I am a bit sad. I dreamt that a very attractive celebrity replied to one of my tweets. I don’t get out much you see…I have small people

10. At the softplay; I actually go there to tweet, don’t you? I go there over the summer holidays in particular to get a bit of “me” time really. Check out the KiddyCharts free parents checklist for surviving the summer for some tips to get through the next few weeks. And they don’t all involve gin, honest.

11. In hospital after baby related stuff; hopefully not during the birth, but perhaps after it, or an early scan. I guess some people might tweet in between puffs on the gas and air. It’s a rather nice way to announce the little dears entry into the world. Not for me though. I was too late to Twitter, but thanks to Joanne Dewberry from Charlie Moos for this, and another lovely lady that tweets in the softplay too

@KiddyCharts tweeted at soft play, school playground, longleat, in a hospital waiting for a scan & just after the birth of O – not too odd!!

12. While swimming; well paddling in the sea really, and only because we were at the beach and the kids looked cute and I just had to share it – honest. Nothing to do with knowing I was going to write this post and I had to rack another one up…

13. In the Supermarket; generally in frustration at them having run out of an everyday necessity by 9am in the morning – is there some strange giant baby wandering the isles in some well known supermarkets nicking all the milk?

14. On the swings; or at them as my kids run riot around the playground because I am looking down at my phone – oh no, hang on, I do actually try not to do this one…generally I succeed, but occasionally the lure of the Twitter stream is just too great…

15. In the study; I know, shocking isn’t it – I actually tweet at work for work. Who would have thought it possible?

16. In the pub; hence the dweet above, though sometimes its when you come back from the pub. This is one to watch; you need to be very careful what you say, and check that spelling otherwise you may very well be telling someone you never met that you love them, or telling everybody in your Twitter stream your inner most thoughts. My advice, approach a dweet with EXTREME caution…

17. In the shade; I just put this in so the title would work, I can’t think of anything witty to say about tweeting in the shade *looks acutely embarrassed and bites lip*

Couldn’t think of 50 I am afraid *listfail.* Perhaps you can add yours to this list in the comments to help me out? Do let me know below. And if you aren’t on Twitter and you run your own business, what on earth are you doing?

This post is part of the July Business Mums Blog Carnival; check ou the other posts if you can.

Love this post! I've never tweeted in the shower, but always tweet when cooking, so my food is always burnt!

Definitely guilty of a few of those! Can I also add at the top of a mountain. It was to distract me from looking down, honest! :)

You made me laugh! Other places I can think of are the garden - perched atop the kids' climbing frame, in the car (not whilst driving obviously) and on public transport about the random people you see.

Thanks v much for commenting - definitely done the garden too, should have thought of that...think I have done from the kids playframe too, while I was waiting to be served imaginary strawberries! :-)

I have tweeted in most of the places you mention (apart from maybe the birthing suite as mine were born before twitter (seems amazing). At the moment I am blogging tweeting and facebooking in a swimsuit from a sunny balcony of a mobile home in Brittany....

Thx v much for the comment, Debbie. And that sounds like rather a lovely place to be doing anything, nevermind tweeting! :-)

Very funny post Helen!! I have tweeted in the bath before, taking great care not to let it slip out my hands LOL!

I have blogged in the bath - despite the danger to the iPad!