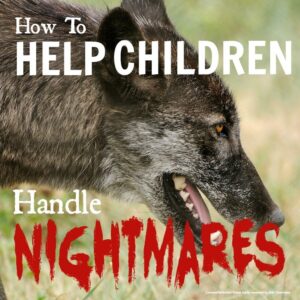 I have to stick my neck out and say I think a lot of the advice out there about nightmares is plain wrong!

Nightmares are a common part of childhood.

My 3 year old has just started to have nightmares … they usually start between 2 and 3 … and so I have been looking for advice on how to help her handle them.

And I have to stick my neck out and say I think a lot of the advice out there is plain wrong!

You see, I was one of those kids who had really vivid and scary nightmares, very often.

I can clearly remember the images and the fear with which I would wake in the night, and the advice I’ve found doesn’t ring true to those memories.

So, whilst putting together a list of other people’s advice, I’ve also been racking my brain to make sense of my experiences as a child who was troubled by nightmares, and tried to recall what helped me most.

The first thing to say about nightmares is that they are different from night terrors. If a child screams in their sleep and is difficult to wake or is confused, they are probably having a night terror. If they wake frightened, but able to describe their dream; it is a nightmare.

There is also a big difference between nightmares which are a normal … and even healthy? … part of childhood and those that are a response to a traumatic event such as death, violence or abuse. I am in no way expert on nightmares after trauma, but from what I understand the nightmares will usually be about the trauma whilst “normal” nightmares are about imaginary fears.

With the right help, trauma induced nightmares should go away or become very infrequent. “Normal” nightmares typically continue until children are 6 or 7 or even … and this was true for me … 9 or 10 years old.

Do Scary Stories Cause Nightmares?

A lot of “experts” claim scary stories cause nightmares, particularly if read, watched or played just before bed.  These experts claim that if you avoid scary stories before bed and ensure children have a calming bed time routine, and plenty of sleep they will not suffer with nightmares.

This might be true for some children, but in general, I don’t buy it!

Most children’s nightmares have very common themes… being chased, falling, being lost, being trapped, unseen monsters … and these themes crop up throughout history in all cultures. They are also the themes that appear in the scary stories all cultures tell.

Have parents throughout time really been so witless as to give their kids nightmares by telling them scary stories before bed? Or were the stories, actually, a way to help children cope with fears that are fundamental to being a human?

As kids, we didn’t have a TV, and video games weren’t invented. We had a regular bed time, lots of sleep and pretty tame stories, and yet lots of nights, I was totally terrified by wolves who chased me into my house, and by falling into the darkness.

So my hunch is the fear came first, and the stories after. I really believe the best scary stories let children explore those fears in a safe space where … if the story is told well … darkness is defeated and everyone lives happily ever after.

So how do you help children who are suffering with scary dreams?

I think the most effective advice is to take children’s fears seriously, but to help them realise and remember it is just in their head and to share with them lots of ways they can make fun of the things that scare them and to believe that they can be brave and take control.

To support my case, I present the real expert on children’s scary dreams: Miss J K Rowling herself!

Do you remember the Boggarts in Harry Potter, Book 3? They are shape shifters who take the form of your deepest, darkest fear. Most of the time the best way to defeat them is the Ridiukulus spell in which you imagine the Boggart doing something completely ridiculous … Ron Weasley gets rid of his boggart who takes the form of an enormous spider by imagining it dancing in roller skates.

But some Boggarts, like Harry Potter’s dementor, cannot be defeated by laughter. Harry has to summon up all his courage and believe he can do something brave to be able to make it go away with a Patronus charm.

There are all sorts of imaginative ways to help children to laugh at fears and to believe that they can be brave, and I’ve included those that worked for me as a child or for friends in the list below.

Some children are so physically scared when they experience nightmares that they develop severe anxiety about going to sleep and having more nightmares. Unfortunately, because anxiety triggers nightmares, the more anxious they are, the more likely they are to have them again.

Children can become locked in a cycle of fear … not dissimilar to post-traumatic stress … and apparently ordinary nightmares can become a massive problem for them.

So if your child has bad nightmares very young, or either you or your partner suffered with nightmares when you were young … they do run in families … I would really encourage you to try out lots of the ideas to build coping skills as early as possible.

Children may suffer more from imaginary nightmares when they are experiencing something that disturbs their sense of inner security e.g. changing school, moving house, bullying, divorce. Children will need help in dealing with these specific anxieties themselves in addition to separate help in handling the nightmares.

Fear of the Dark

Some children who suffer with bad nightmares may also be scared of the dark. Waking up in the dark when they are already very frightened can send them into a terrified melt down.

Lots of children are scared of the dark and grow out of it, but some … including me … never do, even as adults. Lots of the ideas for coping with nightmares also help children get over a fear of the dark, but it’s important to recognise that some children won’t and that they need practical help such as good night lights and landing lights left on.

There seems to a connection between severe nightmares and children with strong imaginations and higher than normal levels of anxiety, emotion or sensitivity to sensory stimuli. Children with these types of personalities may also be scared of the dark and of being left in a different part of the house by themselves.

Unfortunately, these children are often treated as “over anxious” which, I know from personal experience, isn’t helpful. If you think your child displays these traits, you may help them cope better with their nightmares by sharing with them techniques for coping with anxiety and panic attacks.

Does your child suffer from nightmares – do you have any other ideas here too? Let us know!

Alice blogs at Mums Make Lists on everything from parenting and play to new babies, food, meal planning, housework, gardening, crafts and exercise. Naturally disorganised, she hopes that if she can just get it all down in a list or ten she will be able to muddle her way through motherhood without the wheels coming off. Alice hosts the Friday Baby Shower, a weekly blog party for bump and baby posts and the Mommy Archive, a repository of thousands of blog posts ... organised by topic ... from mummy bloggers around the world.

Thank you so much for the advice, my son is nearly 9 and still has nightmare's, he does insist on reading Harry Potter before bed though!! We used the Boggart, and ridiculous charm. Tonight i will get the wand out for him! It's not just related to stories though, he has nightmares pretty often, his sister giggles in her sleep!! I often have bad dreams, maybe it's a personality thing.

Hi! Great advice! My son, 7 has suffered from nightmares for a little over 2 years but I've found now, they're worse than ever. The internet is an ugly world for children. We watched funny pranks on people around the world on you tube and since then, his biggest fear is going to sleep because Chucky (those stupid movies of a doll from years ago) is going to get him. (A person dressed as chucky jumped out from a poster to scare people walking past). His anxiety before bed makes him vomit in bed often :-(

Before I go to a doc or pediatrician, I ran a few of your suggestions by him and its the first time I've seen him smile about 'chucky's' name being mentioned! We will both draw a chucky picture of him wearing a dress and a clown wig with lots of make up on! He also liked the superhero drawing of himself above his bed. We've talked about how he has control of his dreams and can change them because HE is the boss! Changed his room around to the exact way he wanted it also.... So tonight, night 1, we'll see how we go :-):-):-)

Oh bless you - that sounds really hard to deal with. Have u talked to a paediatrician / doctor about his anxieties as it sounds like you need a little bit of extra support. Must be so hard for him and you. Thanks for the comment.

I think the scary story thing is different. GG used to claim nightmares 10 minutes after going to bed if she'd watched a Harry Potter film. It was clearly her over-active (and very much awake) imagination rather than a dream, so we did a bit of art therapy and talking about how she was in control of her own thoughts - that did the trick

A couple of my children have suffered with both night terrors and nightmares. One of them is a fairly anxious child (night terrors) and the other one is a huge fan of imaginative play (nightmares) and has a brilliants imagination. They have both (thankfully) grown out of them.....on the whole. Great list of tips though :) Popping over from the Parenting Party.

Thanks so much for popping over - I am glad they no longer suffer, and also glad you found the info helpful. Am off to check you out now! :-D