I am a member of the Collective Bias®  Social Fabric® Community.  This shop has been compensated as part of a social shopper amplification for Collective Bias and its advertiser.

We have already mentioned on this blog before that we are big Liverpool FC and football fans, so it probably won’t surprise you to learn that as the FIFA World Cup starts today, the excitement in the KiddyCharts household is reaching fever pitch.

My husband and I have been footy fans for a very, very, long time. We used to collect the football sticker albums when we were small – I fondly remember managing to get Trevor Brooking to complete my England team in the 1982 World Cup Squad. Annoyingly, we don’t have those albums anymore. Even digging about in my loft revealed nothing but a few dead spiders, and far too much dust *atichoo* However a friend on Facebook managed to dig her husbands old Albums out instead…do you remember these too? 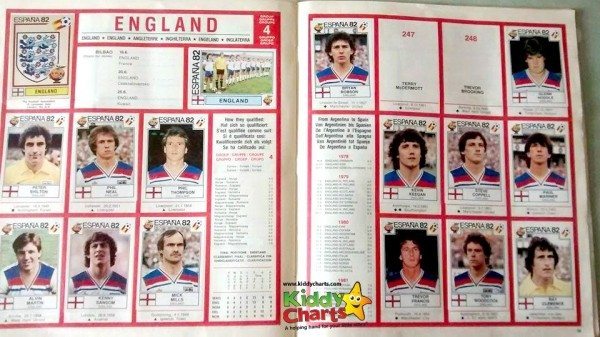 He didn’t manage to get Trevor Brooking did he?!? *HA*

The build up: England vs Peru

In order to try and capture the excitement in the build up to the big match this Saturday, we are getting nostalgic. We wanted to remember our time as children of the eighties with our Panini albums, so we decided to have a sticker and footy themed family night in. Our kids don’t need too much persuading to be “into” the World Cup. We were, in fact, lucky enough to be celebrating Stuntboy’s birthday with a trip to Wembley to see England play Peru. We won 3-0…. *Gloats*

….and as it was on a Friday night, we had the weekend to help prepare for the #BigMatchPlanner campaign later on. My wee boy was over the moon that we had won, and we had an amazing time there. I was stunned he managed to sit still for the full ninety minutes, and we even chatted about how we would celebrate the win in the car on the way home with our #CollectiveBias World Cup themed family night in a few days later. So lets get cracking…. 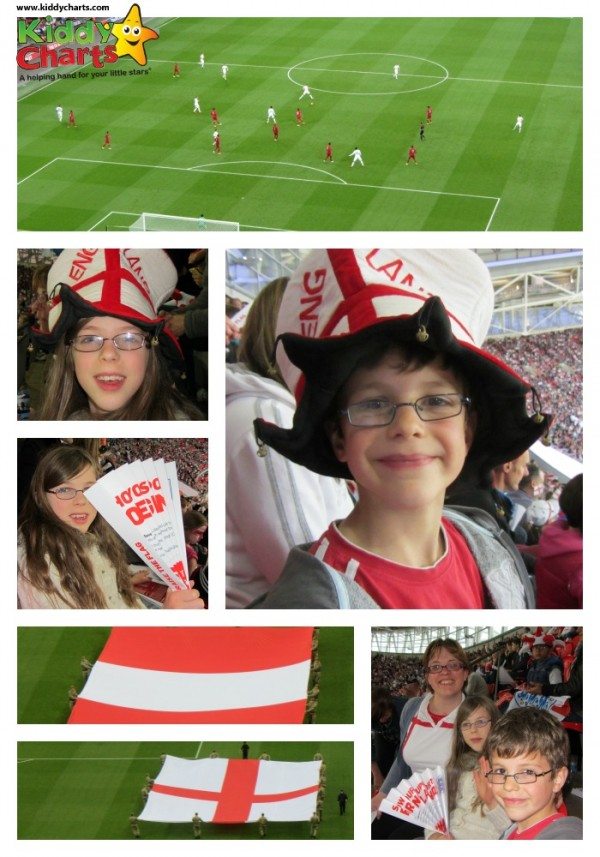 The following day, we headed off to Tesco to get all the necessary party stuff to make the evening go with a bang. Stuntboy wanted the shopping list to be simple:

At first, I struggled to find the Coca-Cola; it was at the end of an aisle on its own, but we got there in the end…these 4 x 1.5 litres special World Cup promotional party packs are only £4.00 and as I drink Diet Coca-Cola rather a lot, are perfect for parties and beyond. *bad girl* 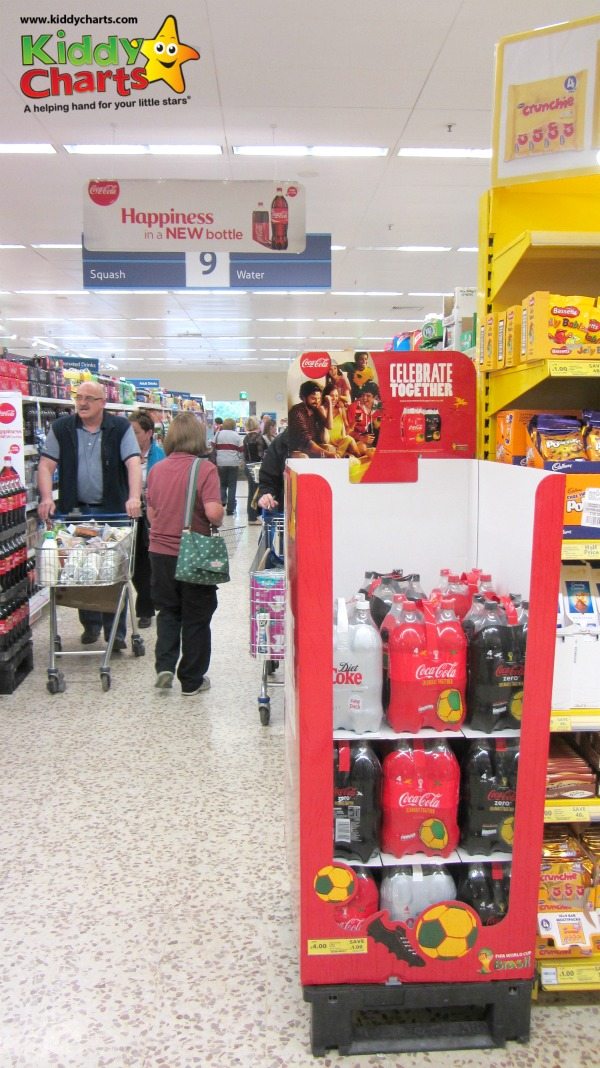 The plan for the evening was to be kept pretty basic as well. We wanted to just go with the footy flow as best we could. Though I like parties, I am not one for planning, so the easier the better for us:

We managed to find a simple Flags of the World quiz and we were ready to go.

My husband put the background music on *I protested* and we began the quiz. We gave the flags of the world quiz an added twist by also asking the kids if the teams the flags represented were in the World Cup. I am truly ashamed to say I came last; the kids beat me *ignorant.*

I was delighted that the anticipation of seeing what is in the sticker packs for my children was just as it was for me in 1982, 1986 and probably beyond. I still rather like opening them now…

My kids were so pleased that we managed to get the FIFA World Cup sticker – the NUMBER ONE sticker in the album. Apparently, that’s rather important. ;-) *who knew*

The kids were frantic to get the stickers in their album to see whether they had them already or not; much disappointment occurred though as we didn’t get a single England player in ten packs of stickers. We did, thankfully, already have a few. Such a shame, we might have to nip to Tesco to get some more now! *inevitable* 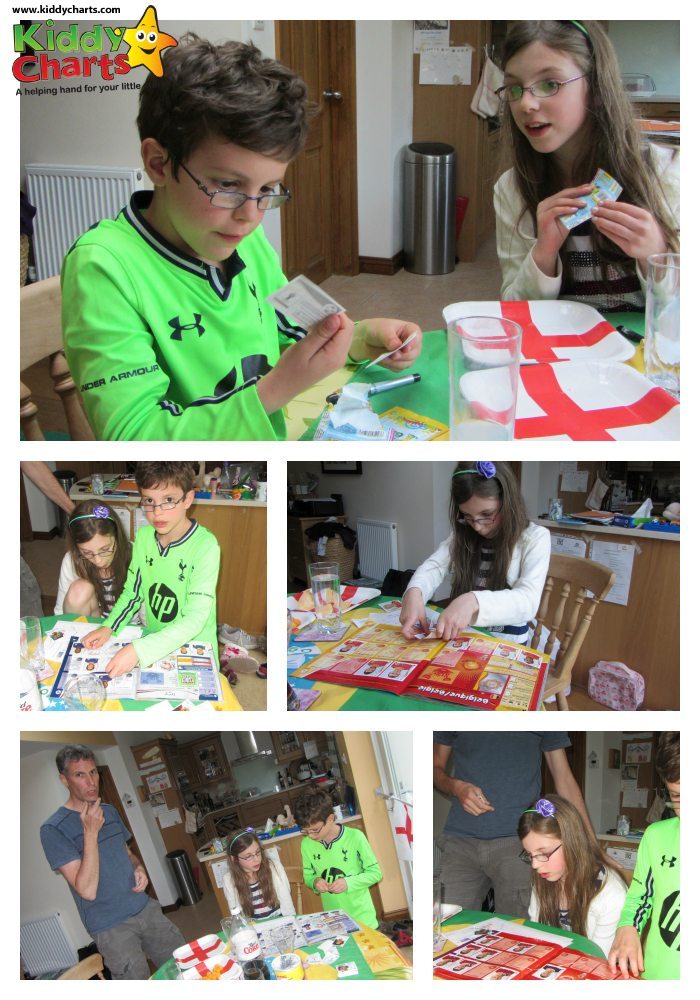 Overall, we managed to entertain the kids with Diet Coca-Cola, cheesy footballs, flags and stickers for over two and a half hours! We didn’t have time for football goals, highlights subutteo or anything else; we had to go to bed. Who would have thought a few stickers could keep our kids entertained for so long?

Why don’t you try a Sticker World Cup night in with the kids too, they’ll have a ball *did you see what I did there*?

We had so much fun doing all of this, that we decided that we simple HAD to get the kids involved more once the tournament actually started, so to help them have some interest in every game from 12th June onwards, my very clever husband put together a World Cup predictions spreadsheet.

Why don’t you have a go too – just click on the image below to download a copy of the Excel spreadsheet. 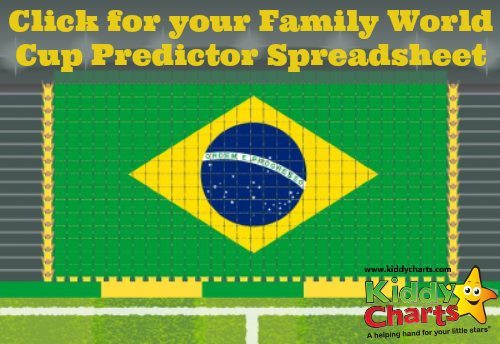 It’s quite clever. Choose the teams that you think will progress, as well as the wildcard questions at the bottom, and then see how you get on at the end of the tournament on the 13th July. What are you waiting for; is it Brasil, Spain or England that are going to win?

Why not have your own party after you have filled in your predictions? Visit the Coca Cola Big Match Planner site for ideas and inspiration…so many team, and cultures, there has to be something that takes your fancy.

This is amazing!!! hahaha

Totally with your children about the Pringles and quite disappointed in myself that I forgot all about cheesy footballs!! Great post.

Panini stickers are full of so much win, I can't even explain! Unless you can't find that elusive few and have to play the "got, got, got, need, got, got, need, need" game with your mates...I'm pretty sure hubs has his sticker books from back in the day somewhere hahah!

I love your vintage sticker album! I used to collect the sticker albums for my eldest son (who is now 26) when he was younger ...it must have cost me a fortune over the years! It looks like you had a lot of fun! x

It is cool isn't it - I love Panini...still do, we are madly collecting them as you can tell! We did indeed have a ball. Thanks for the comment :-D

What a fun family night. This looks rather like our big Basketball Championship Bracket chart over here in the States. My goddaughter is a big soccer, oops football fan and watching her play helped me learn the rules.

Ooh - not heard of that - the championship or the chart...will check it out! Thanks for the comment