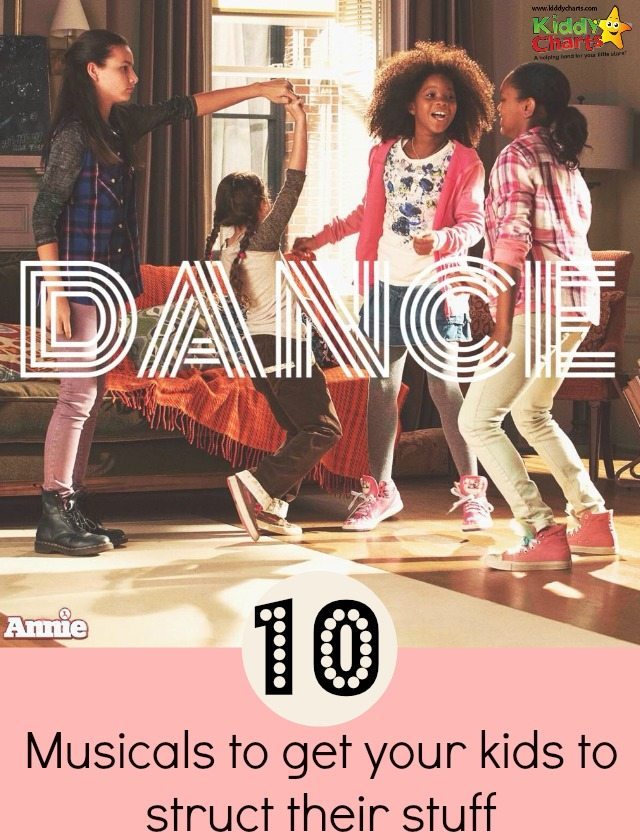 We are celebrating the launch of the new Annie DvD today with our own little look boogie-based celebration of all the best musicals for kids. What are the films out there that can really get you and the kids up and dancing, or at least singing at the top of their lungs?

I have to admit to being one of the worlds biggest musical fans, from the old to the new; I am always willing to break into song, often at quite the most inappropriate times. So, if you, like me, are a “less than closet” musical manic, here is the ultimate diva dancing list for your little ones.

We all know the songs, from “Hard Knock Life” to “Tomorrow.” There really is something for everyone, and if you are anything like me, you might just find your heart-strings being pulled rather sharply by the relationship between Will Stacks and Annie.

ANNIE - Official Trailer - In Theaters Christmas 2014!
Sometimes it’s the kids that teach us more about ourselves then anything else ever could. 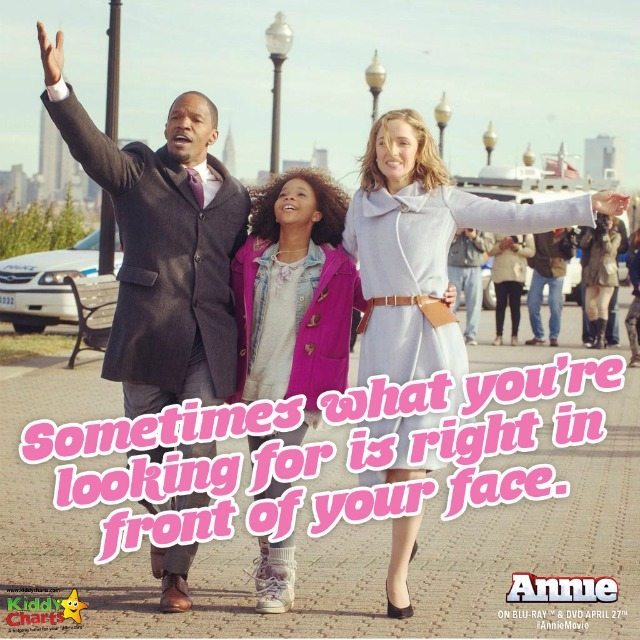 Can you believe that this was made in 1939? I know – neither can I. Some wonderful songs, and an amazing performance from Liza Minelli’s mum, Judy Garland. The songs will be with us for many more years to come I am sure, particularly “Follow the Yellow Brick Road” which even Elton John felt compelled to reference in one of his fabulous songs. Watch out for the Wicked Witch though, the melting scene still keeps me awake at night, and I am 41. *Hits fast forward*

Dick Van Dyke and Julie Andrews are the king and queen of musical films; appearing in this compilation list twice. I recently introduced my kids to this film, and it is one of the few films they have ever seen that they are willing to watch again and again. “Supercalifragilisticexpialidocious” *phew* is enough to get anyone jumping around, and the fox hunting scene is a timeless movie moment.

The Hunchback of Notredame

This may not be everyone’s favourite Disney film, some might say it is darker than many of their other offerings, but the vivid colours in the gypsy world, and the atmospheric songs, particularly “God help the outcasts” and “The Bells of Notre Dame” make this a must for inclusion. Of course, Aladdin, and the Little Mermaid nearly made it too, but we can’t have Disney everywhere now can we?

The Sound of Music

Welcome back to Judy Andrews, alongside Christopher Plummer this time; some rather un-ruly children and a whimple. Sound of Music is a classic movie, and all you need to do is listen to the score to find out why. If you aren’t tapping your feet to “I have confidence” or bounding over streams while singing “Climb every mountain” then clearly you need an injection of boogie into your genes!

This is a charming tale of an inventor and his wild, flying car, two children, and a very strangely named lady; Truly Scrumptious. It might not be suitable for younger children, as the Child Catcher character, wonderfully played by Robert Helpmann, can be a little spooky. However, the energetic Dick Van Dyke and classic songs such as the title track, “Toot Sweets”, and “Posh!” more than make up for his sinister presence.

Based on the novel by Charles Dickens, this Rogers and Hammerstein movie stars Ron Moody as Old Fagin. He is the picket pocket master, in charge of Olivar and his friends, and he is as charming as they come. “Reviewing the situation” is one of my favourite songs from any musical, and I suspect I am not the only one.

Oliver Reed’s turn as Bill Sykes gives the film a gritty edge, but the beautifully shot dance scenes for “Consider Yourself”, and “Who will Buy” will have you all leaping up from your chairs and spinning each other about enthusiastically; we promise you.

“The rain in spain falls mainly on the plain”, or so we are told in this film about a gentleman’s efforts to turn an East End flower girl into a proper “laydee.”  The film is littered with songs to shift those old and young bones. In particular, “Get me to the church on time” and “I could have danced all night.” We all know the film Pretty Woman too, don’t we? Well this was a earlier version, without the Richard Gere element, a lot more dancing, and less thigh length boots… ;-)

The success of the Harry Potter films shows that we do all like a good bit of magic in our lives. Bedknobs and broomsticks provides just that, with a little bit of frivolity thrown in as well courtesy of David Tomlinson and Angela Lansbury’s shenanigans with a flying magical bed. Angela Lansbury also appears as the voice of a teapot in another Disney film, Beauty and the Beast, but it is her performance in this one, which makes all the difference. She plays a failing witch beautifully, and your kids will love it.

Finally, I am afraid I couldn’t compile this list without mentioning Frozen. As much as “Let is go” may grate on us adults, for some reason the kids are still loving it, a few years on. If you can get past this overplayed song, then there are some wonderful tracks, and stunning graphics in the film. If you haven’t already, do give it a chance. Though, I suspect that there are very few people left in the world that haven’t actually seen it yet….

I hope you like our list, and if you have been inspired to get down and get funky by Annie, and the other fantastic movies, why not check out some of these great thoughts from the Annie movie too; remember that you sometimes don’t have to look too far to find the answer to your prayers either…. 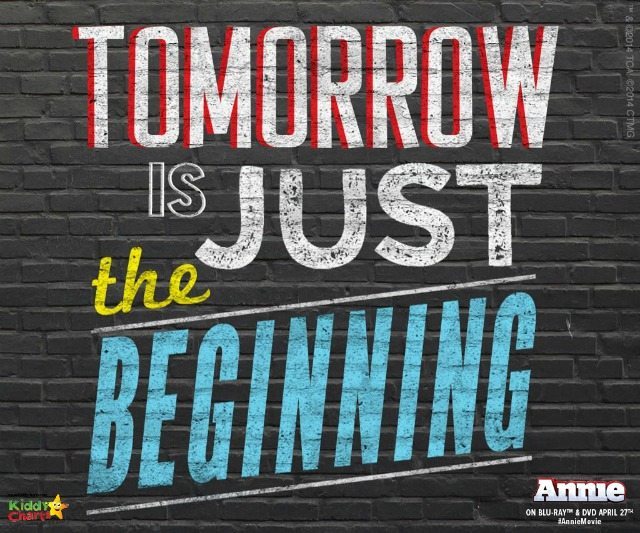 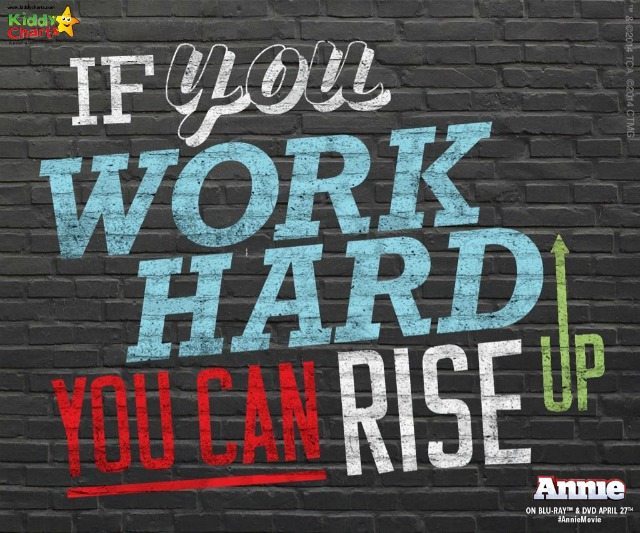 This is a sponsored post, but I have watched all these films, and love them – I really am a musicals nut. Stuntboy even likes them; not that he actually has too much choice to be honest….

Thankx for such a nice photo and content ,, Its too nice and also your web design is too cool

Well you've got me tapping my toes for sure! I love all these films, although I have to say the babes and I prefer dancing to The Wiz over Wizard of Oz :-) I'm crazy about dance, musicals, films and all three combined.

I'm putting together a huge kids film guide and will definitely include some of these classics. The boys watched it with friends over the holidays but I haven't caught the new Annie yet, still wondering if it lives up to the original but I've heard great things. Thanks for a fun post!