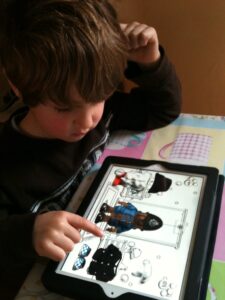 Look at the concentration!

Would you believe Paddington Bear has been around for over 50 years?! I am always thrilled to see Paddington Bear make an appearance. We loved him in my house when I was a kid and that marmalade loving bear is just as popular today. I swear, Paddingtons interpretation of ‘Singing in the Rain’ is probably one of my all time favourite things to watch EVER!! (and somthing I routinely inflict upon my children..). So, Boiled Frog Gaming has created a new gaming app for kids – ‘Paddington Bear’s Adventures’.

As a big Paddington fan I was super keen to take a look, and as soon as it was loaded on to the iPad, boy, was I chuffed to hear the familiar theme tune from the cartoon that ran in the ’70/’80’s!My giggles quickly attracted the attention of my four year old, (who knows Paddington my old books handed down to him), and so a very excited little Bean, as an extra special reward, was allowed a go on Granny’s iPad….

The game consists of six adventures, five have a choice of difficulty levels. As you play the games you get clothes for Paddington to dress up in, and then you can create your own digital bear.

The game is available for both iPad and the iPhone.

It was like being transported back to the original cartoon! With the arty 2d graphics, a lot of it in black & white. Its all so very British, with a modern London backdrop. All keeping true to the original animation, much to my relief and glee.

This app is probably a little bit steep at £2.99; the rights to Paddington Bear may come at a price. You don’t get a huge amount for your money, and it’s not really the type of game that keeps on giving.Could do with being just a little less expensive.

I thought that Bean, having never been on an ipad before, took to the game really quickly. The lay out is very clear, with a nice big choice menu suitable for little fingers to tap tap tap away at. He soon got the hang of what to do and easily found his way around. It is very helpful to have spoken instructions, essential in a game aimed at pre-schoolers – as Bean can not yet read! The set-up was straightforward, you choose which member of the Brown family you wish to be (Paddington of course!), and I like the fact you can have up to three profiles, so your children don’t mess with each others games, and which means they can come back and pick up where they left off.

Stickability  – 7/10
The games have a simple theme, spot the difference, jigsaws, etc – some of it a bit samey – basically dragging items to fit the right hole, which to be honest, Bean quickly tired of. We did get stuck in to ‘Making Marmalade’, chopping and cooking against the clock. Bean found that time ran out a bit quickly on that game, and unfortunately he is an impatient sole and it took a bit of jollying from me to get him to start it again from scratch each time. The best incentive for Bean was ‘Paddington Dresses Up’. A sweet game where you can mix & match hats, coats and boots that you’ve un-locked along the way from winning the other mini-games. When Paddington is in your chosen attire you hit the camera button and it stores a photo in your scrap-book, you can then use it to create your own pictures! This quickly became the focal point for us – what combination of crazy clothes can we make Paddington wear next!

This at least encouraged Bean to go back and try harder on some of the games he had given up on earlier, which can only be a good thing, and this part of the game I can see Bean coming back to time and again.

Age Appropriateness – recommended for all ages – 6/10

There was a lot of jostling between us – mummy wanting to get have a go, Bean wanting mummy to win a new outfit for Paddington, Granny wanting her iPad back…! Three generations were able to enjoy this game together (and sneakily alone…Granny!) and it certainly captivated Bean. It suited my four year old just fine, and with the three levels of difficulty there is room for him to grow in to the game as he gets more apt at the tasks. I’m not sure older children would be quite as interested in this game though. I would aim it more at 3-6 year olds….and their Paddington mad mummies!!

I really enjoyed sitting down with my little boy and playing this game together. It’s very calm, with old fashioned qualities brought to a modern format. Nice to have a kids app that isn’t all flashing bright colours and noise blasting out at you. It kept us quiet and entertained for quite a while, which I feel definitely makes it a winner!

We were sent the product for review for free, all opinions are our own though.