Wombi Toys Review: Repair, test and package up your toys

Little Star was delighted to get an application to review that was focused on toys. We LOVE toys, clearly. Wombi Toys is a simple idea. There are 20 mini games to do within a toy factory run by the charming, Lampy; a robot and erm, a lamp.

Children are presented with a conveyor belt of toys. They have to “fix” each one, test it, repeat for four other toys, and then box them up for delivery from the toy factory.

A lovely idea I think you will agree. We just need a star one for us over here methinks, and then it’d be an even more prefect reward for our behaviour charts!

This app is at the lower end in terms of cost; it costs more to give your kids a poke in the eye. Well OK, that’s free, and we shouldn’t do it. But you know what I mean, it’s worth it if it entertains them, right? It’s less than most other apps on the market, with some staying power, so it’s worth it.

This is a really simple application. The kids were off and running as quick as the light coming on in Lampy’s bulb. The principle is simple; fix five toys in the toy factory run by your loveable robot, Lampy, test them, box them up and ship them out. That’s it. Job done. 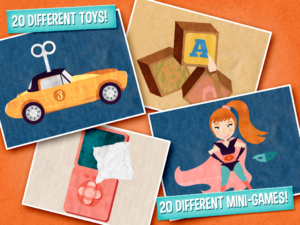 We have had this app for over a month now, and the kids still dip into it every now and then. It’s not an Angry Birds, or a Jetpack, which both my kids would like to play forever if they could, but it still has great durability with them. And bags and bags of charm. Admittedly, its the younger one that remains interested, but that’s no surprise given its target age group.

Spot on here. My son is 5 and is much happier playing it than my 7-year old daughter. She got bored, despite their being 20 different toys to mend and test. After she had done them all, it didn’t hold the same delights anymore. My son, however, is still keen.

A good entertaining app for pre-schoolers. It’ll keep the attention of those in the younger age bracket for longer, so better value if your kids aren’t quite knocking on school’s front door just yet…

Note: We were provided with the app free of charge for the purposes of the review. This post also contains some affiliate links.