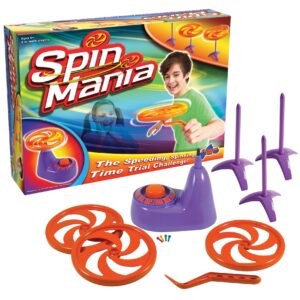 Spin Mania Review: Watch out for those plates!

A game including spinning plates, and Stuntboy…could this be a recipe for complete and utter disaster…we found out at Chez Little Star when we were asked by Drumond Park to review their latest game, Spin Mania.

Now I have to be candid; I wasn’t terribly impressed with the idea of a game that involved spinning plates – how much mileage can there be in that? But, I am always an open-minded soul, so was willing to be proved wrong. Happily, I was.

The idea is that there is a spinner for the plates with a timer attached. Players, so my slightly deranged children, place pins around a “playing area” that they must then put their spinning plates on to using a spin spike to transfer them there. Plates are spun using the spinner, and the timer started as soon as the first plate begins spinning. All three plates must be put on their pins before the first plate stops spinning.

When completed, there are pegs to place in the timer to show what times each player managed.

Starting the game was easy, as soon as you had bought the batteries which I was disappointed didn’t come with the game, particularly as it requires the larger, more expensive C ones *note to self, buy battery charger for this size.*

Other than this, the kids and I read the instructions, and within about a second, we were away. It’s as easy as that.

The box says it’s for 6+, however, my little boy is 5 and loves it; so if your little ones have good fine motor skills, and are also capable of the physical skill it takes to move the plates about on the spin-spike without dropping them, then you could use the game with slightly younger children. My eldest is seven, and though frustrated at first, soon got the hang of things, after she was reminded that patience is a good thing!

Put it this way; it’s been played alot since we got it.

The spin plate pins have even been placed on top of the cats scratching post as a new and sneaky place for Stuntboy’s consideration; he still found them, and got his plates in position before his first plate stopped spinning; Chatterbox was disappointed her aim for plate domination didn’t work…..

The game is a massive hit with me because it’s a great way to keep the kids entertained and on the move when, quite frankly, the weather is just a wee bit pants….

We have started using more than one room downstairs as the playing area as they get more adept at moving the plates to their destinations, so there is more mileage yet.

A big recommend from me; its perfect for teaching the kids fine motor skills, and control; not something that Stuntboy has in spades at the moment…

Surprisingly, the kids creativity is being tested with new and wonderful places to put the plate pins; to challenge and flummox the opposition as much as possible!

8/10 – despite my reticence at first, this actually is a great game from a rather simple idea – and no real plates involved otherwise I would be keeping Stuntboy well clear… Good for motor skills, patience, and most importantly, a good deal of fun. Could make an excellent Christmas present methinks, particularly as its on special offer for over 50% off at Amazon

The good overall score is down slightly as there was one minus I want to make all of you aware of; the spinning unit is a bit temperamental  Sometimes it worked, sometimes it didn’t. You need to be careful batteries are well and truly in place, and that you have pushed the pointer down properly to stop and start the spinner, otherwise it appears its broken; when, well…its not.

Note: We were provided this game for the purposes of review. This post contains some affiliate links. 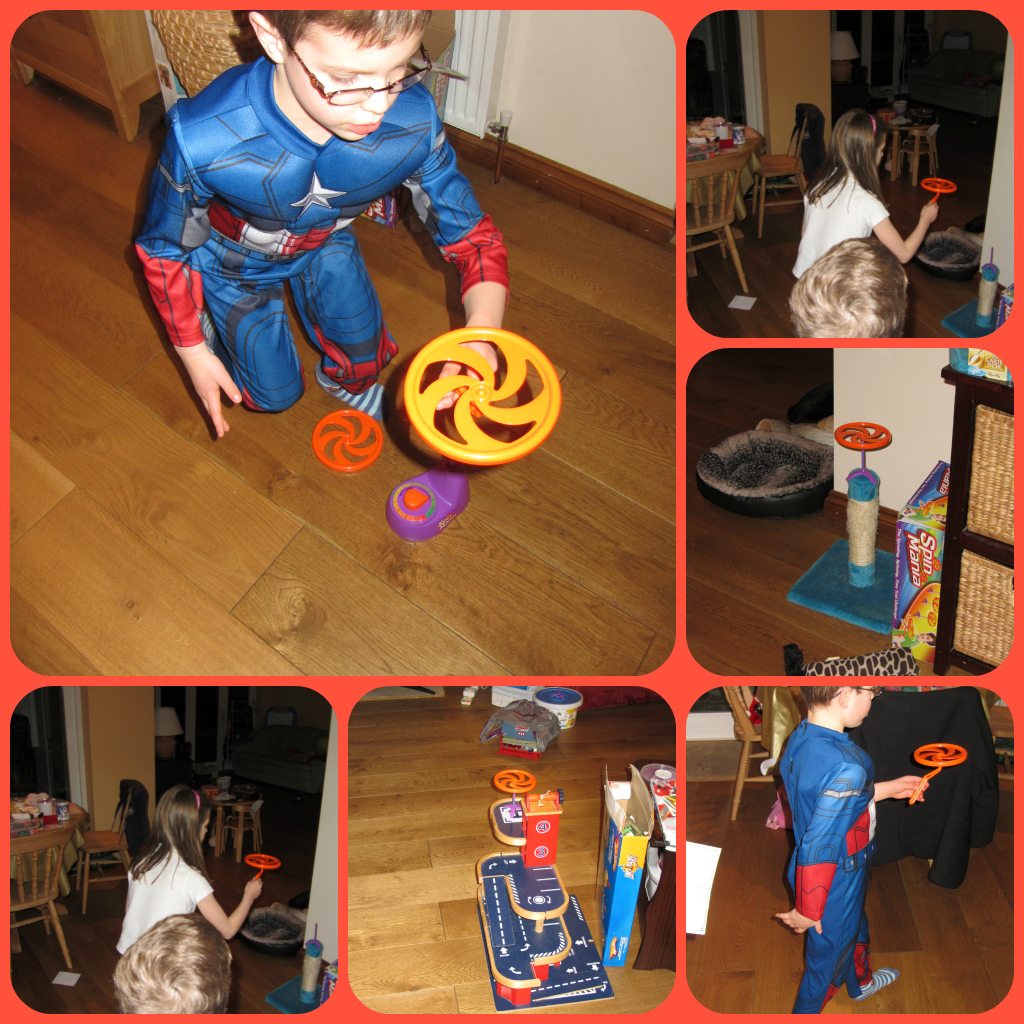 Spin Mania; having fun with the plates