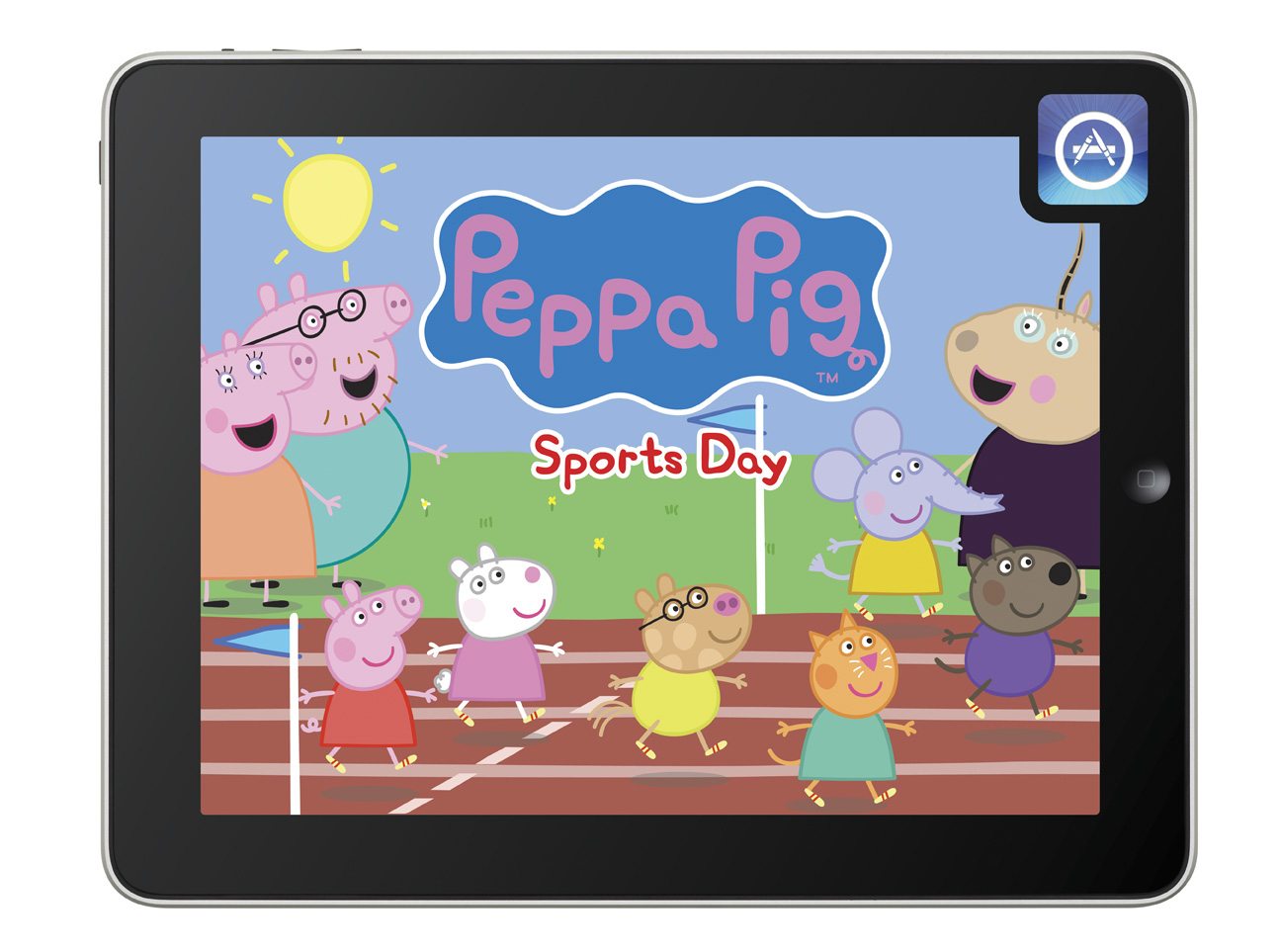 Peppa Pig Sports Day: On your marks, get, set, go!

So some lovely people sent Little Star a Peppa Pig Sports Day app to review – it would be rude not to, don’t you think….

This is actually quite expensive for Little Star – think he has Scottish roots….I guess it’s because it character based, but I have to say I would have expected a little bit more for the money. However, the KiddyCharts kids liked it, so I haven’t marked it as low as I might have done for value. Mainly because Chatterbox actually said:

But then she is only six, so not sure she quite understand how much these things cost yet…..

It’s very simple to understand, the Chatterbox and Stuntboy were away really, really fast! In fact so much so that Little Star could come and help me with the washing instead of sitting with them all the time. The menu is simple, and picture based; even choosing a character is easy. All you have to do is drag the character you want to play as across the screen and you are away.

The games are simple to play; perhaps with a little too much potential to bash the iPad and Little Star did have to intervene a couple of times when things got a little over excited in the running/cycling bits.

Strangely, the kids liked making the ice cream and a rosette best; rather than the Sports Days games of Long Jump, Tug o’War, Obstacle Race and Cycling. But they have always been a bit arty-crafty; though god knows where they get that from. Little Star always ends up covered in glitter. 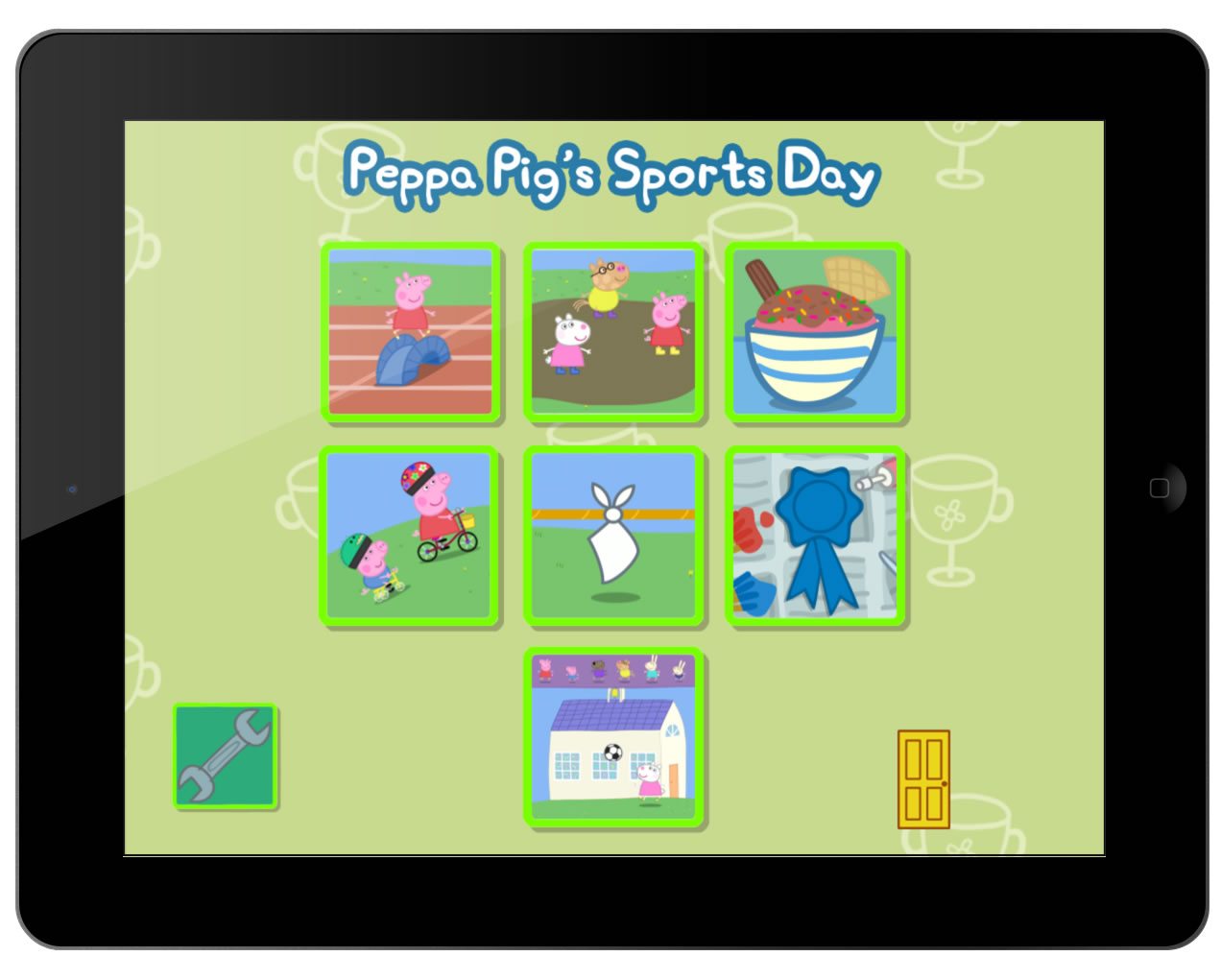 But then just as with the Moshi Monster Moshlings App that we reviewed a few weeks ago; it was made for fun and that’s what you get. There is a little bit of learning around making the ice cream on shapes and what goes into an ice cream, but that’s it. If anything, it helps a bit with learning to loose – something Stuntboy needs a lot of work on!

We did actually have a bit of a problem with Stuntboy wanting to play this constantly, even when we were actually sitting at the Olympics trying to enjoy the gymnastics we paid a lot of money to go and see….

Therefore, I guess it captured attention rather well. I suspect this is because it features on of their favourite characters, and anything with Peppa and George in is alright by them. It also has bright, engaging colours just like the TV series, so they can relate to it instantly. In addition, the speed with which they can understand the controls all contribute to it being a hit.

The app is targeted to the 4+ age bracket; and with Stuntboy (5) and Chatterbox (6), it worked like a dream. For younger, I suspect that the controls might be harder to manage. However, the ice cream and rosette making would be easy for 4 year olds to get to grips with relatively soon. I suspect that anyone older that 7/8 would start to think it’s a bit babyish…Peppa Pig is after all for CBeebies age and not CBBC!

The kids gave it a 9 again; the Little Star children are very generous you see. Apparently it’s not a ten because:

“There aren’t enough choices of fruit flavours for the ice-creams.”

I have marked down slightly from the kids because of the cost; See you later, Jimmy!

My kids love the Peppa Pig Sports Day app! If you're after something a little more educational, the Polly Parrot app has helped a lot with my daughter's numeracy skills.