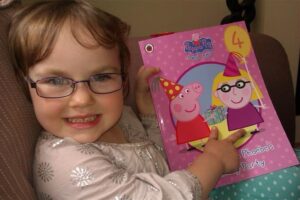 With a 3 year old avid Peppa Pig fan, we jumped at the chance to review this personalised Peppa Pig storybook from Penwizard!

It’s a Peppa Pig book that is specially printed by Penwizard to have your child in the story.  Other themes are also available on the website.

How does it work?

You simply choose your story, select various look-a-like options to represent your child in the story, fill in their name and a personalised message to go on the first page inside and order the book.

What did Phoebe think?

Phoebe absolutely loved that she was “actually in the story with Peppa Pig myself, Mummy!”.  She was a little critical of the picture of her having blond hair, but there was no light brown colour which is what she would choose herself (it was dark brown!), and the glasses were the wrong colour (the only option was black and hers are purple), but this didn’t spoil it for her and she recognised that it was her in the story :-)

We had to read it about a dozen times in a row when it first arrived and she has made every visitor read it to her since.  As it was just before her birthday and the story was all about delivering party invites, it was really topical and she was thrilled to have her very own, special book with Peppa Pig – possibly almost as good as actually meeting Peppa herself!

What did Mummy think?

Mummy was thrilled that Phoebe loved the book so much and it’s been fun to read and see Phoebe identifying with the story and characters as though she believed it was actually happening to her. We were a little worried that she might expect Peppa to appear at her actual birthday party though! :-)

The basic choices for designing the ‘child’ were good and the ordering process was quick and simple.  Although the Peppa Pig style of pictures is simple, I thought adding a lighter brown hair colour would obviously be good, as well as maybe basic pink and blue options for the glasses, given the choice nowadays for fun frames for children who need to wear them, rather than just black, but I was impressed with the option to be able to select glasses.

At £17.49 including p&p, I think I would have expected it to be a hardback book, however it was paperback and quite thin as Peppa stories aren’t generally long, so as a parent I think I would need to justify spending that amount on it, However, I do understand there are higher costs involved with having the licence to use Peppa Pig.

Overall Phoebe 10/10, though she did want to have the right colour for her glasses, and Mummy 5/10

Generally, the books could, with the right choice of stories, be a great way of helping a child who is about to start wearing glasses, going in to hospital, having a new sibling, starting school, etc. – the sort of thing where it would put the child in a new or perhaps slightly daunting situation in a fun and subliminal way and it’s something I might consider buying for that, and more so if the total price was under £15.

It may be more suited to grandparents, godparents, aunts & uncles giving as a special gift :-)