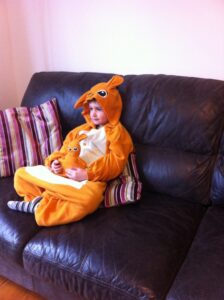 Is it a costume? Is it sleepwear? Well, it’s a Kigurumi from www.kigs.co.uk!

The answer, at least in our household, is it seems to be everything! Suitable for using as a dressing gown – snuggle up before bed time kind of thing, for playing in, eating in – in fact it has been quite difficult to remove at times!

What is a Kigurumi?

We were only too pleased to take up the offer of reviewing a Kigurumi, although at that point slightly unsure of what exactly it was!

The official Wikipedia explanation is that it is ‘the Japanese name for costumed performers who represent cartoon characters, often animals’.

What did we think?

The first bit of fun came from actually choosing which one we wanted from the website – there are several different ‘Kigs’ to choose from including a turtle, flying squirrel, chicken, giraffe and penguin. It should be pointed out at this stage that the choice on offer for adults is even wider to include both animal and character costumes!

So eventually we opted for the kangaroo, which is extremely cute and even comes with its own pouch and joey! The delivery speed was fantastic, from ordering to delivery in about 48 hours!

One of the first things I noticed was an awful plastic-y smell from the packaging, which took a good airing on the line to shift but certainly didn’t seem to put Alex off! The size was good, they are sold in one size for kids, aged 5 – 9, Alex is a fairly tall nearly 5 and it fits him well now and has plenty of growing room! It is warm, soft and cosy but not too thick so it could be worn year round, just with more or fewer layers underneath.

One thing I hadn’t anticipated was the sudden interest in kangaroos and other wildlife. Lots of questions later – why is the baby in a pouch? Do you have a pouch Mummy? Can I put my car in the pouch? This also led to a renewed interest in playing with forgotten farm and zoo toys, which I thought was an excellent bonus!

The downside is the price, at £34.95 I feel it is a little steep for children as, if they’re anything like mine, they go through phases of what is in and out very quickly, manage to get clothing filthy within about 5 minutes of putting something on and grow, overnight sometimes!

Overall, the kigurumi is a good quality, fun, novelty outfit – and if school ever decides to spring a last minute dress up day on us – well, we’re prepared!

We would give the Kigurumi 8/10, dropping a couple of points just due to the price I’m afraid.