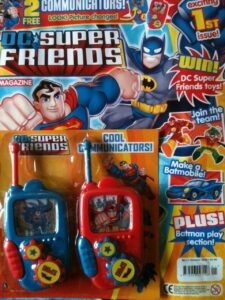 Well, it has been a while since there has been quite so much excitement over an envelope coming through the door! The anticipation of the new DC Super Friends Magazine from Titan Magazines was somewhat overwhelming for four year old Bean! As I’ve mentioned in previous reviews, Superheros are a bit of a ‘thing’ round here – like a lot of four year olds, Bean loves all things Batman! This magazine has been a long time coming….!

DC Super Friends brings together some of the greatest heros, (such as Batman, Superman, The Flash and Green Lantern) to form the ultimate super team to teach children lessons of honesty, truth, and the importance of teamwork! This colourful new magazine is aimed at pre-schoolers aged 2-5, with loads of activities, stories, fact files and competitions. Every issue also comes with a free toy. The first edition has two special Superhero walkie-talkies!

What did the kids think?

“It’s good actually, I like it. The best bit is the make a batmobile. I wanted two stories, anyway it’s not really very long butthe puzzles are good. The free toy was brilliant, I liked all the superheros on them – I play with it a lot.”

….and boy, does he! The free gift has been played with until it fell apart, got stuck back together, and played with some more.

Often, when we go to the shops, Bean gets to choose a magazine as a special treat or reward, so I asked him which he would choose now – expecting the Super Friends magazine to win hands down.

So I was quite surprised when he told me:

He’s right – in the past he has chosen the Peppa Pig magazine or Cbeebies, or Octonauts…the usual ones aimed at the same age group and for the same money, but which are usually twice as thick with lots of stickers, a couple of stories, and work-books to encourage them with their numbers and writing. Bean noticed that this magazine was less substantial and wants one he can return to again and again.

In all honesty being a bit of a comic book geek in my younger years, I was just as excited as the boys when we received the Super Friends mag! First impressions, it is very eye-catching and colourful, the front cover made it look very exciting. I really like the illustration style – chunky and playful. I felt it was a little thin but there is a lot of activities to keep little’uns amused. I do wonder about the target age for the magazine (2-5) – my 2 year old Roo didn’t show much interested in anything other than the free toy and a brief listen to the story. I felt he was a little too young to get involved with the activities – but then he’s not one for sitting quietly! I think it is ideal for 3-4 year olds, as Bean being nearly 5 found the most of the puzzles a bit too simple, although did enjoy the cut out & make parts (but that was mostly me doing it for him!).

I so wanted to like this magazine, and for the most part I do, I just feel they need to expand on it a little. It needs to be bulked out more as it’s not yet quite worth the £2.99 they are charging – if future issues are as thin as the first one I think we will pass over it to get more for our money. But then knowing Bean, as soon as he sees the next free gift he’ll be after it which frustrates me as the gift should be the bonus extra not the sole reason for buying a magazine. 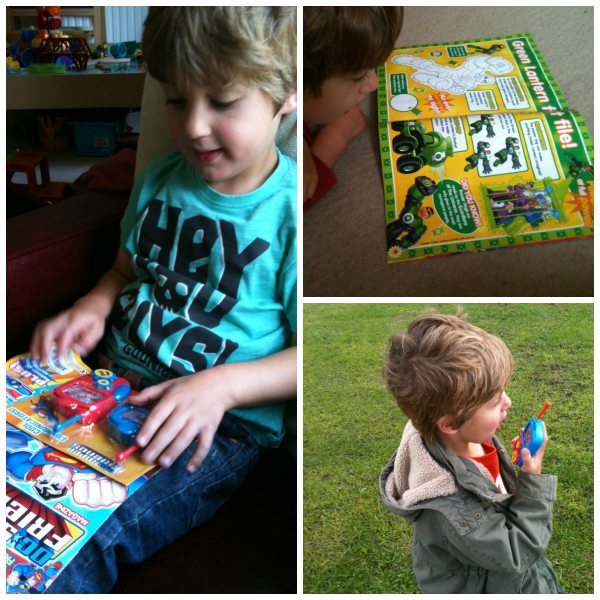 Have you seen this magazine – what did you think?