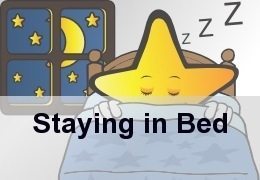 Stuntboy has been a bit of a night owl over the last few weeks. And its amazing when you get out of the habit of waking in the night, how terrible it makes you feel when you have to do it all over again…

He potty trained himself at three pretty much. He then refused to wear nappies in bed at four even though he often didn’t go through the night without needing a wee.

BUT he usually wakes, and asks us to help him go to the loo. And he has done for over a year now.

However, he is five and a half, and we had a feeling he could go through the night, he was just rather pleased with the attention that needing a wee brought him…

“Mummy, I get cuddles in the night and Chatterbox doesn’t. I like that.”

And it’s lovely that he likes mummy cuddles. I like them too. But not necessarily at 2am!

So we brought out the reward charts we have. The ones with a race track on that he can colour in if he progresses well in any given task. Guess what the task was? Staying in bed through the night without getting mummy up to help him go for a wee! We are off to the skate park together when he completes the track. Something he gets to do anyway, but it’s still a goal that motivates him.

She still gets her cuddles, and more importantly so does he, but this time they happen at a bit more of a respectable time in the morning!

Is your little one waking in the night? Why not nip to our store and try one of our track based behaviour charts. They work for us!

I'm not one for sticker charts but having seeing the progress my 4 year old is making at school getting rewards I might try this.In fact I need them with all 3 of mine.

It's funny reading about reward charts - did you see my Instagram this evening?