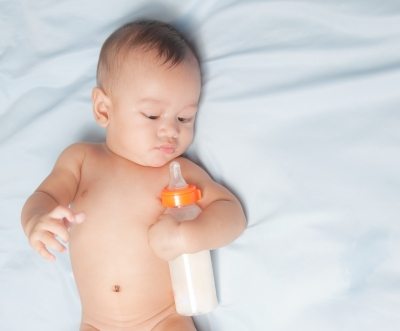 Bottle Weaning; cute isn’t it, but try to start to wean early as it makes it easier…

This is another guest post from Maria Albertsen as part of our series of Thursday Thoughts for Parenting Behavioural Challenges. We hope it gives you out.

When we are pregnant we are often given so much advice on how to deal with being pregnant, labour and the first few weeks of life with a new baby and then it’s as if we are just left with nothing to prepare us for life after this! One of the things parents often struggle with is deciding when and how to manage bottle weaning: moving their baby from a bottle and onto drinking from a cup.

Health visitors actually recommend starting this process at around 6 months of age when you start to wean your child. This is because the longer you leave it the harder it is and the more likely a problem will arise.

If you are breastfeeding then of course it’s fine to continue with this for as long as you want to, but all other drinks should be offered from a cup.

Try using a training beaker to begin with, or a ‘sippy’ cup as they are often called, as the flow out of it will be slower than a normal cup and your child will learn to adjust to the difference between the breast and the training cup more easily than going straight onto a normal cup. Once your child has mastered this, somewhere between the age of 6 months to a year, then offer them drinks from a normal cup. Start slowly with just a few centimetres of water or juice in the cup and then increase this as your child learns how to drink it.

If you are bottle feeding your baby then offering milk in the bottle is fine although Health Visitors recommend you swap to a cup from 1 year of age. The reason for this is that a child can’t drink as quickly from a bottle as a cup and so they are more likely to get tooth decay, yes…..even from milk! It is recommended not to put juice into a bottle at all as this again increases the risk of tooth decay. If you do choose to put juice into a bottle your child will probably prefer the taste of juice and this will make it much harder for you to swap them to a cup later on as they will just want their juice. Some children move easily from a bottle to a cup, whilst other children find it very hard. Again, try using a beaker/sippy cup from about 6 months of age.

As we have seen, drinking from a bottle for too long causes tooth decay and if you do choose to put juice into a bottle it should be very diluted and you should brush your childs teeth after drinking. This happens because as your child drinks from the bottle the juice does not go straight down like it does when you drink from a cup, but it ‘pools’ around the teeth and can cause damage. Also, it has been noted that prolonged use of a bottle may interfere with speech development as it prevents babies from strengthening their tongue and tongue muscles.

Bottle Weaning: What to do if they don’t like it

If your child really doesn’t like a cup, try and make it easier by using a cup with their favourite character on it such as ‘In the Night Garden’, ‘The Tweenies’ or their favourite animal, etc. You can also buy training cups with a handle at each side which makes it easier for them to pick it up and to avoid any spillages. Also, leave a cup around the room so they get used to it being there and choose to pick it up on their own when they are thirsty.

Remember that it takes a lot of energy to drink from a bottle and your child has to suck longer to get the same amount of liquid they would from a cup. Drinking from a cup gives them the liquid they need quicker, keeping them hydrated and full of energy too.

As always we would love to hear your opinions on this and any tips for our readers are greatly appreciated.

I really need to read this - I've done it all wrong I'm sure as my 2yr old still has bedtime bottle! x

Its so hard to get it right though - bottles are such a comfort to them, and its difficult to take them away. My little one wouldn't take milk for at least a week when we stopped them. But then she realised she wasn't going to get it at all if she didn't use the cup I offered it in instead. It was probably one of the hardest things I have had to do as a mum; deal with the screaming. And she was 12 months old! She still shouts loud when she doesn't get what she wants and she is nearly seven now! No idea where she gets it from... ;-)